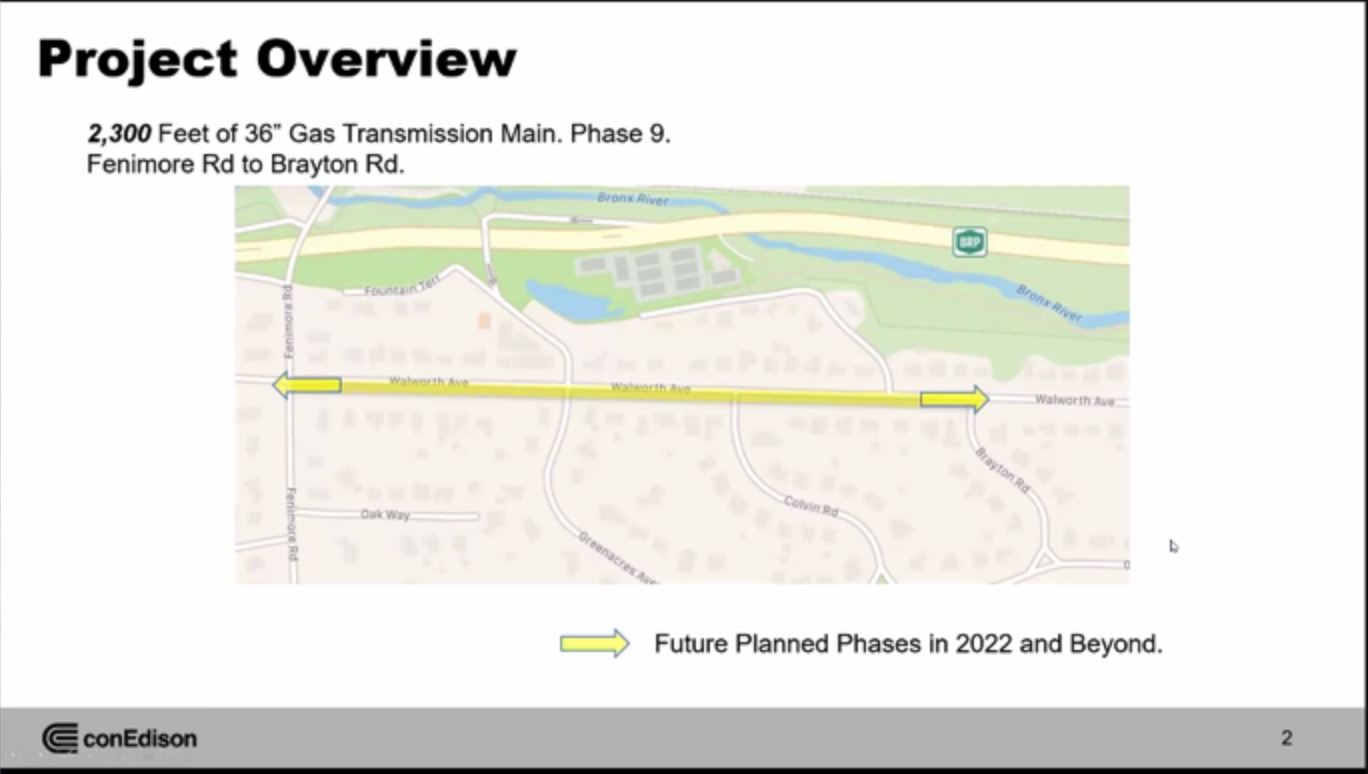 A large gas main will be installed on Walworth Avenue, disrupting traffic from November 2021 until March 2022. The pipeline is part of a new transmission line that will extend from the Bronx to White Plains.

Several Con Edison employees attend the Village Board meeting on Tuesday June 22 to discuss the installation of the high-powered natural gas main. They explained that they will replace an existing transmission main on Walworth Avenue and will work on the three blocks from Fenimore to Colvin Road. They will also be installing new infrastructure during the construction to serve more customers and avoid costly future repairs. See Figure 1 for a map of the overall project.

The project is expected to take eight months to complete. Work will be done in segments so that it disrupts the smallest number of residents as possible. The schedule is set to complete the work from Fenimore to Greenacres by October 18th, 2021, Greenacres Avenue to Colvin Road by November 8th, Colvin Road to Brook Lane by December 21st, and Brook Lane to Brayton Road by January 6th. The pressure testing and distribution final tie-ins are scheduled to be complete by February 2021, and final restorations and paving are scheduled for March 2022.

The work is expected to take place Monday through Friday from 8:00 am-5:00 pm. Depending on the schedule and unforeseen circumstances, some work may be done on Saturdays. Con Ed reported that they developed a Noise Mitigation Plan for all of Westchester County that will include engineering and administrative tools to keep construction noises to acceptable levels.

Mayor Veron inquired what the communications strategy is for the project, and how residents will be made aware of the construction. Representatives responded that affected residents will receive emails about ongoing work and there will be traffic boards posted with information as well. Trustee Crandall added that Hitchcock Church is in that area, and in addition to crowded Sunday services, they also have a preschool in the building. She raised concerns about potential traffic issues and how children and caregivers can safely move in and out of the building. She said that “emails may not be sufficient” and suggested that Con Ed post paper notices on doors with a phone number to contact if any issues should arise. Mayor Veron later highlighted this point by emphasizing how helpful it would be for residents to have a single point of contact for issues related to this project. 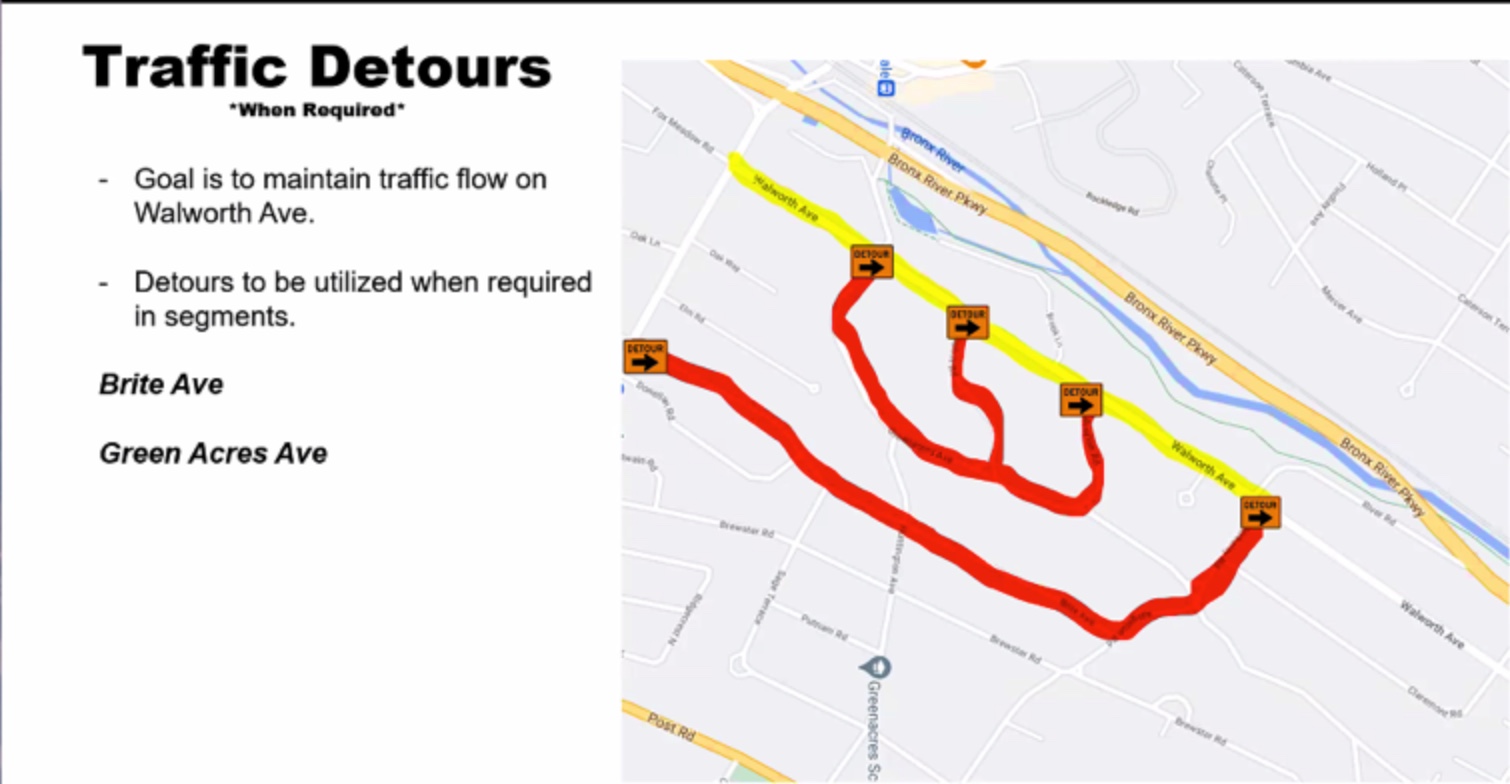 Will customers lose their gas service during the construction? The Con Edison representatives said, "Customers will temporarily lose gas service while they are switched to the new distribution main." The interruptions will be scheduled and not take more than a few hours.

Trustee Whitestone inquired if Con Ed plans to hire any contract workers for the project and noted that in years past, contractors have had “poor diplomatic manners” with residents. He asked that Con Ed “hold their contractors to the same standards as their own workers.” Mayor Veron added that the Board received a lot of negative feedback from residents about these interactions. The Con Ed representative said he would investigate this issue, and that the project will try to contract out as little work as possible.

Addressing the traffic mitigation plan, Con Ed plans to put detour signs around Greenacres if the road needs to be shut down, although they do not plan to close the street. Police will help facilitate single-lane traffic if necessary. See Figure 2 for a map of the suggested traffic detour routes.

Con Ed then reviewed the 7-foot-wide trench that is part of the construction plan on the street. Trustee Brew asked if and how people living on that street will be able to access their driveways if a 7-foot trench is dug in their street. Con Ed explained that they do not plan on completely shutting down traffic at any point, and residents will always have access to come in and out of their homes. When the trench interferes, Con Ed will put a steel plate down so vehicles can enter and exit their driveway. Con Ed also noted that their Corporate Affairs office will be available at any time of day to answer questions or handle issues with residents.

Justin Arest if the presence of this line would allow Scarsdale residents to get new gas lines as Con Edison currently has a moratorium on new gas service to residents in lower Westchester. The answer from Con Edison was “no” for now, though they might lift the moratorium in 2023.