Questions Arise Over Decision-Making Processes at the Scarsdale Schools 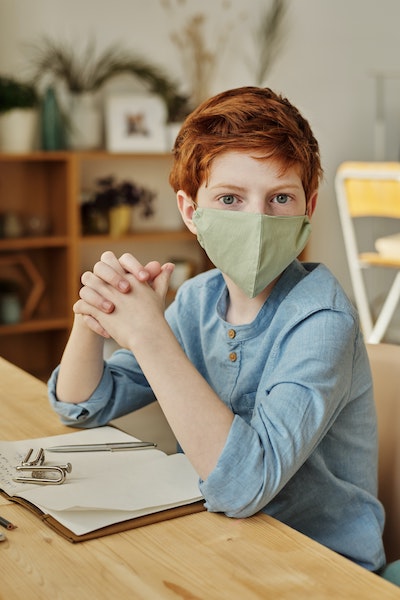 Profound questions about the management and decision making at the Scarsdale Schools erupted at a marathon six-hour meeting of the Board of Education held via ZOOM on Monday night February 8, 2021.

The evening began with a budget study session that showed that the district’s finances face some real challenges for 2021-22 and beyond, with a decline in surplus funds, dipping fund balances and the threat of the loss of state aid. That meeting, which was scheduled to run for an hour extended into two, postponing news of a school re-opening until eight pm.

Elementary:
Return of elementary students (Gr. 3-5) full-time before the end of March.

Middle School:
Wednesdays will have normal, full instructional days, and A and B cohorts will alternate in-person learning every other week by mid-March.

Scarsdale High School:
Expansion of the A/B schedule to two, full-days for each cohort by mid-March.

Though most greeted the news that third through fifth graders would attend school full time, many wondered why, since August, the district has insisted there was not enough room to keep students in school, six feet apart. The district architects were even invited to a BOE meeting to demonstrate why there was not enough space. Yet suddenly this requirement had been relaxed, or additional school spaces had been located?

In the past, the district said these decisions were made by the Restart Committee, but in a statement from the parents on the committee, PT Council President Dalya Kahn said that the PT Council and PTA representatives on the committee serve in an advisory role, briefing the committee on parents views garnered from conversations and social media. The parents denied having any decision making power. Even a Board member who serves on the Restart Committee appeared surprised by the district’s announcement. So the question arose, who is making decisions and based on what criteria?

At the meeting and in an email sent the following day, Dr. Hagerman sought to explain this change of course citing:

-decreasing infection rates
-the successful transition of K-2 to full days safely, including during lunch;
-increasing evidence suggesting school spread has been very low over this school year;
-the downward trend in community spread over the past several weeks; and
-the availability of, and access to, vaccines for school faculty and staff.

However, some were skeptical about the explanation. The community was previously told that the lack of sufficient space for social distancing was the reason schools could not re-open. The district never provided a list of additional metrics that would need to be met to open schools including infection rates and the availability of vaccines but now these were being offered as the reasons for the change in policy. And though elementary schools will be fully open in March, there are no benchmarks or a timetable for a full time return to the middle school and high school.

School Board Member Ron Schulhof who serves as a Board representative on the Restart Committee raised the issue with Dr. Hagerman. He said, “Is our decision on this predicated on a change in state guidance? … He continued, “On one side I am happy we are bringing kids in grades 3-5 back… For months we were told the kids would not fit – and now we’re told they do. How do we move forward and garner trust? …. We brought in an architect who said we couldn’t do it. It is hard to ask the community for trust when we have been telling them one thing – and now it’s not. I appreciate the work that is going into this but how do we stand in front of the community and say to high school parents we can only have students in for two days and Middle School for two and half days.?”

Dr. Hagerman replied saying, “We are giving up six foot mitigation as we are coming on with vaccinations. We can fit – but we can’t fit with six foot of social distancing – which is the commitment we made to our staff and students. It is a phased in process. … The health metrics are going down. We have vaccinations for our teachers. We will continue to make changes in an incremental way as we can.”

Schulhof continued saying, “We should have said we can fit the kids at six feet but we don’t believe we should do that -- here is why. This is what happened at the beginning of the year. I am part of the Restart Committee. We have to be forthright about what’s possible. There should be trust in the system. We have to look back at what we could have done better.” 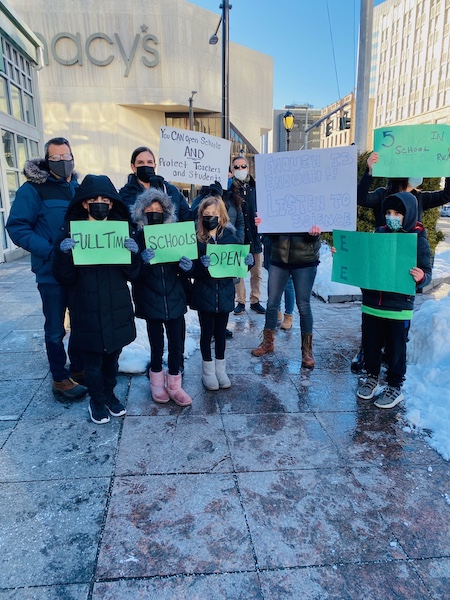 At that point, Board President Pam Fuehrer jumped in and said, “There are other Board members that wish to speak” and then provided her interpretation of the issue. She said, “When we heard they couldn’t fit we were talking about instructional spaces – not learning commons, libraries and cafeterias. We were not sure how long this would go. We were not willing to spend the money (to set these spaces up as classrooms.)

The remaining Board members then presented their views of the policy change and diverged on their understanding of the six foot requirement and why it was no longer an obstacle to full time school.

Board Vice President Alison Singer said, “My understanding is that students will be six feet apart when they are seated at their desks – but there will be points in time when they will not be six feet apart. I am only comfortable moving forward because of the vaccines. I have a feeling the new CDC guidelines will see vaccines as a mitigating factor.”

Carl Finger said, “I think there were times I heard about using classrooms and other portions of the school. It could have been clearer but it was discussed. It sounds like Ron was a party to information that I was not -- now we feel confident that a significant number of staff and faculty will be vaccinated by March, along with masks….

Amber Yusof agreed. She said, “I did not have the same information that Pam and Ron had. It wasn’t clear to me that we weren’t considering gyms and learning commons. As a board we’re supposed to all have the same information. It’s a process problem. This important committee is meeting and we don’t have the background. I think having a public discussion is valuable on some of these subjects.”

Bob Klein explained, “Kids and teachers are not frozen in a space. Kids are moving around. Fitting vs. fitting safely is a nuance. We know more about transmission rates and the vaccine now. Teachers are one of the constituents. I am not defending the confusion. But I think it’s great we can fit more and feel that it is safe. It’s taken time for teachers to feel comfortable with this.”

Karen Ceske said, “I agree with what Bob said. Our kids will have to be more static and teachers too. I understood that we could fit them, but it will change the experience.

Eric Rauschenbach responded, “There is going to be greater density within the building. It is not a normalized situation. Most teachers will be moving between two spaces. The bigger classrooms can fit the entire class.”

Asked if the high school would return full time, high school Principal Ken Bonamo said, “If we get to April break and if there is no change to the CDC guidelines, we might ask families to decide whether their students will be in school or remote through the end of the year.” He explained that if only a percentage of students want to return full time they might be able to accommodate them, thought he hopes that more kids will come back.

It was past midnight when the Board opened the floor for public comments and several parents spoke about this policy change. Irin Israel, who has presented his own floor plans of how the students could fit safely into the classrooms, said “I am grateful that grades 3-5 are going back to school in March. However it has been stated that we can’t fit elementary at six feet. This is disingenuous. Suddenly these issues have disappeared. This had nothing to do with vaccines. The density has not changed. We may have reached the same conclusion, but you have a duty to be forthright and transparent.”

Sharon Chesler said, “This is a woeful example of where at one board meeting we are told one thing and then another. It hasn’t been clear what is driving these decisions. Is it the teachers union? I ask for transparency and communication.”

Diane Gurden had five points to make: She said;

“Trust: it’s important to be honest.
Every single parent has the right to speak – parents have been shut out of this process.
We need a written plan.
What is the plan for rapid testing?
Attendance at Scarsdale High School is only 50% --we can fit more students in the school.?”

Evelyn Harris asked the Board to hold a town forum to answer questions. She said, “It is now 12:15 am. CNN is saying “School Age American Children are 10 Times More Likely to Die by Suicide than by COVID. My son is a freshman – he is lost.”

Christine Weston said, “The Scarsdale community is confused and frustrated. Allow parents to partner with you. Our kids are crying, screaming and sleeping all day. If we are following the AAP guidelines for sports, look at the AAP guidelines that place kids 3- 6 feet apart.

Diane Greenwald said, “We’ve spent hours and hours and hours discussing how we can permit wrestling. If we are serious about letting these kids wrestle, then we have to let them back into the classroom. Our values are out of whack. If there are ways to mitigate for risk for wrestling then there are ways to mitigate risk for kids walking down the hallways in school. The Board has not been integral to decision making in this process. Please bring these decisions to the entire Board.”

At the conclusion of the meeting, much remained unclear. Will the older students return to school? If so, when? Is there a threshold in the number of vaccinated faculty members that needs to reached for schools to fully re-open? Will vaccinated teachers be required to return to work? What is the position of the teacher’s union on these questions? What guidelines is the district following? The state, the CDC? Who makes the decisions, the Restart Committee or the Administration? None of this was made clear.

What was clear is that school board members are not privy to all the facts and have not been given the opportunity to weigh in on key decisions such as the reopening of schools. The process is not transparent to the community because even their Board members don’t appear to have the full picture. The Board cannot exercise oversight if they are not informed. What is also clear is that throughout this process the administration has not shared all the facts with the community. But why?