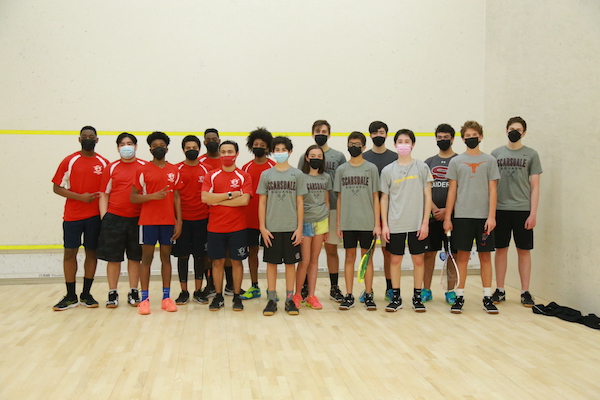 The Scarsdale Squash Team had their first win of the season on Sunday January 9th against Street Squash, a NYC-based team. The new Scarsdale Squash Team began competing this winter in the FairWest Public School Squash League. They play against many local schools including Rye, Bronxville, and Greenwich. They will compete in the upcoming National Interscholastic Championship, Jan 28-30, at the renowned Arlen Specter Squash Center in Philadelphia. The group of players are trying to become an official Varsity SHS team, under the SHS Athletic Department.

The team was launched by Scarsdale parent Sasha Dichter, whose daughter Zoe Dichter, a freshman at Scarsdale High School, plays squash. Dichter recuited interested parents on Facebook and then held a ZOOM to discuss with those who responded.

Most of the students on the team already played squash at the Westchester Squash Academy (WSA) in Mamaroneck, so naturally they chose to practice there every weekend. Will Pantel, their coach from WSA agreed to coach the team and attends all their matches and will accompany the team to the National Interscholastic Team Squash Championships in Philadelphia.