What Metrics Need to Be Met to Reopen Scarsdale Schools? 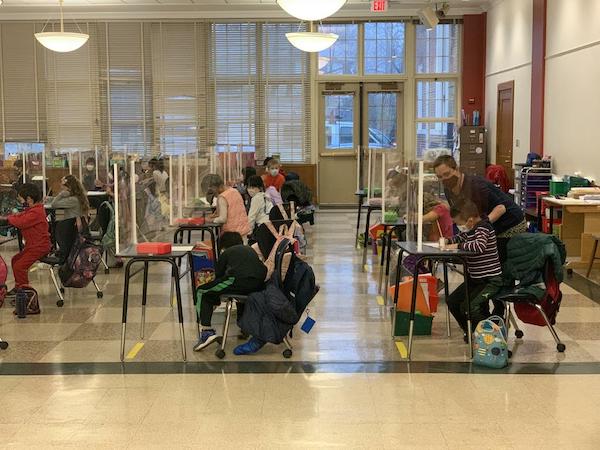 With so many neighboring districts reporting plans to re-open schools full time as well as the availability of vaccines for teachers and indications from the NYS Health Commissioner that the six foot social distancing requirement may be relaxed, many are wondering what’s holding Scarsdale back from re-opening the schools?

Ardsley, Bronxville, Briarcliff, Byram Hills, Chappaqua, Dobbs Ferry, Eastchester, Harrison, Hastings on Hudson, Mt. Vernon, New Rochelle and Rye are either in school full time or have announced plans to transition to full time school in the next few weeks. In Scarsdale, elementary school students will return to school, however the Middle School is only moving to 2 days and alternate Wednesdays on March 17 and the High School is going from 2 half days to 2 full days in school on March 8.

We learned that the district has purchased plastic partitions and thought that might be a sign that a fuller return to school was in the offing, however the information we received from Superintendent Thomas Hagerman offers no timeline and makes no guarantees. Here are responses from Hagerman received on March 1, 2021:

(Q) The parents shared the news that the district has purchased 4,200 barriers to be used for grades 3-12. Will these be installed soon or are they intended for the fall?

(A) So far we have spent approximately $180K in total for barriers as follows:

-Mid/Late Summer 2020: $53,000 - 660 barriers primarily for special education settings and one for each classroom for one on one instruction if needed. Also for offices. Prices were extremely high at this point and time was of the essence.
-Late-Fall 2020: $32,000 – 1,200 barriers for k-2 students primarily used at lunch.
-Early-Feb (on order): $93,000 – 4,200 barrier for grades 3-12 primarily to be used at lunch and instructionally as determined by teachers.
-An additional $2,000 for miscellaneous other barriers needed along the way related to all of the above

(Q) Howard Zucker has indicated that the state is re-examining the six-foot rule and says he wants to get kids back in school. Will this change the district’s plans?

(A) If the NYSDOH changes the social distancing requirement to say, 3ft., this will not change plans--which has always been to get all kids back in school as soon as it is safe to do so for students and teachers--but it would certainly accelerate our timeline.

(Q) I am sure you are aware that many Westchester districts have now announced plans to fully re-open in March and April. Do you expect Scarsdale to follow suit?

Like other districts, we have been planning for a full return throughout this process. The availability of vaccinations for faculty and staff is new risk mitigation that we will believe will help us lessen six-foot social distancing and get us back into school more quickly.

Since the beginning of the crisis, parents requested a list of required metrics that, if reached, would enable full-time school to open. Concise criteria for opening were never presented, but one fact was clear. Both the administration and the Board of Education insisted that the school’s physical plant could not accommodate the full school population at six feet apart as required by the NYS Department of Health.

When parents repeatedly questioned calculations that showed there was insufficient space inside the buildings, the administration invited district architect’s BBS to present their plans at an 11/16/20 Board of Education meeting. At the time, Architect Kevin Walsh of BBS shared his schematics for the layout of two sample elementary school classrooms, one at Heathcote and another at Edgewood. Walsh showed desks placed six feet apart with 56 square feet of space per occupant. According to Walsh, the layout must allow for two means of egress from each classroom. For a classroom of 785 square feet, 14 students could be accommodated along with a teacher and an aid. Depending on the number of teachers and aids, an additional student or two could be added.

Relying on these calculations the board and the administration spent months claiming that this was a major hurdle for full time school.

Frustrated with the architect’s analysis, Scarsdale resident Irin Israel obtained floor plans of the elementary schools and used a graphic approach to draw in the desks in the rooms. He quickly noted that desks that bordered the walls of the rooms did not need six feet of distance on the side abutting the wall, saving considerable space.

However, when he presented his renderings to the district, they failed to acknowledge his solutions. He wrote to the Board and administrations saying, “Comparing the architect’s square footage method (which was used to make all layout determinations and decisions this past summer and fall) to the graphic method (which I presented on 11/9/20), the graphic method allowed for an additional 507 kids to fit in our Scarsdale schools at six-foot distancing (17% more children).

Then suddenly, on February 9, 2021 Superintendent Thomas Hagerman announced that students in grades three through five would return to school in March, following grades K-2 on November 30, 2020. This meant that the elementary schools would be fully populated with students and staff.

Explaining the change in direction, Dr. Hagerman made a distinction between six feet of social distancing and remaining “functionally six feet apart.” Here is what his email said. 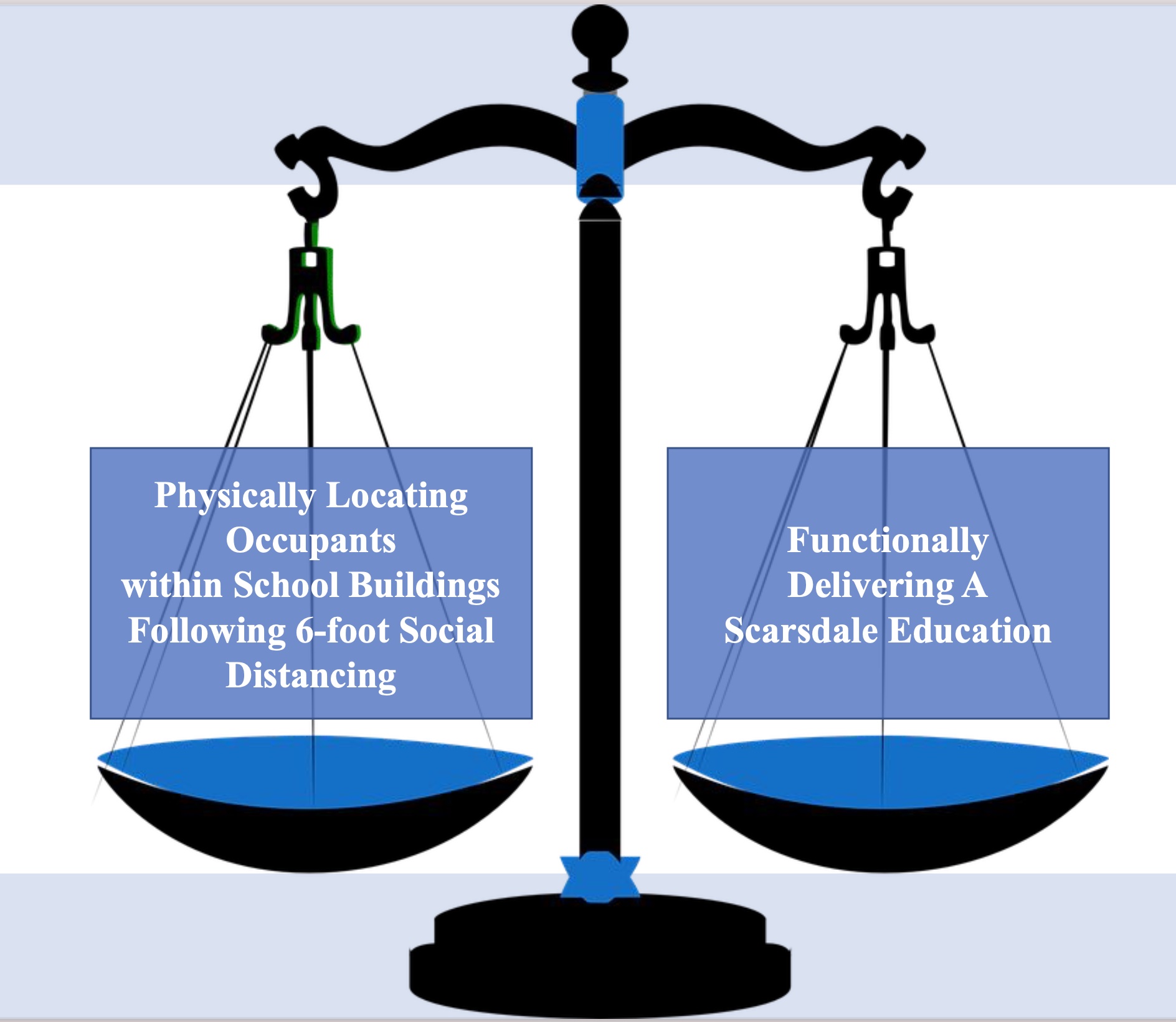 A report from District Architects BBS dated January 8, 2021 showed that the full school populations of each elementary school could safely attend school.

“Specifically, how can students fit back into our buildings when we were told they could not because of the need for six-foot social-distancing? The answer is that students could not have fit all this time and remained functionally six feet apart. The idea of social-distancing focuses on reducing the contact between all individuals in an environment. In our assessment, this concept goes beyond the measurement of six feet between desks to encompass the full range of functions necessary to run a school. The new arrangement moves from a more cautious application to accepting a purely mathematical interpretation of 6 feet of distance. This represents a fundamental change in our application of social-distancing, and, at least partially, weakens one of our core mitigation efforts. We resisted this for some time primarily because of health and safety promises we had made to the staff and community, but also because we did not have confidence in our ability to run “school” safely and effectively, given the complex intricacies of a typical day.”

Now a response to a FOIL request from Israel, reveals that the district was aware that there was adequate space in the schools for all elementary school students to be social distanced at six feet. In fact, the administration received a report from district architects BBS dated January 8, 2021, that demonstrated how the rooms could be laid out to give students and teachers ample space. Why the change in the numbers?

An analysis from Wired Magazine shows that 56 square feet of space per student is far more than is needed to maintain 6 feet of social distancing.It appears that the architects initially used a simple mathematical calculation to determine how many students could safely fit into schools. Architects assumed that each student would need 56 square feet of space, and they took that number, divided it by the total square footage of the school and calculated the number of people that could be safely placed in the building. That figure of 56 square feet was far higher than the 44 square feet used by neighboring districts –and 44 square feet was later determined to also be too high. See the analysis here:

In the report from the architects dated January 8, they compare the square footage method to the graphic method and determine that all students and teachers could safely attend school, and there would still be remaining open spaces. In the most extreme example, only 22 rooms at Greenacres would be needed, leaving 18 rooms including the learning commons, gym and new multipurpose rooms open for use.

However, as far as we know, the administration did not share this report with the Board of Education and did not make it available to the public.

With this new information in hand, Israel shared it with Board of Education and asked the following:

2) 40 rooms, including some large rooms like gyms, would be unused and not needed for classes (but could be used for other purposes) even with all children fitting at six-foot distancing. 40 empty rooms.

Basically, it’s not even close.

Before you yell “density!”, keep in mind that we have yet to hear any metrics of density and where the line between safe and unsafe lies. 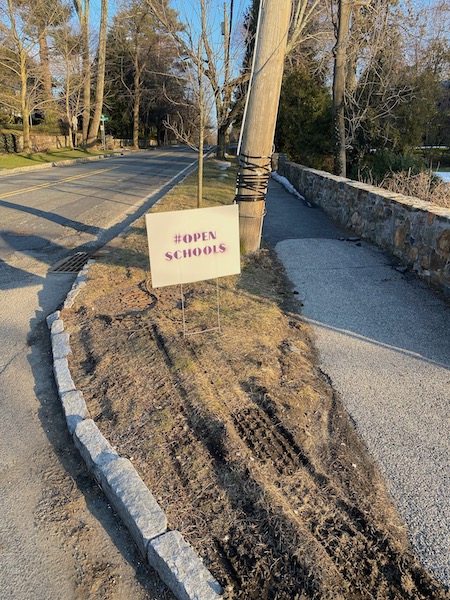 Sign on Fenimore RoadRegardless, with these drawings, while the school density would obviously increase, the density per classroom would not increase at all.

I spent much time this past fall illustrating exactly what these documents show, and here, it is unequivocally proven true: that all current in-person Scarsdale elementary children can fit full-time at six feet and have been able to fit since the beginning of the school year.

1) Is BBS Architects the correct district architect for Scarsdale? This architect has blatantly dropped the ball by using a sub-par mathematical equation to position the children in our schools. This was a simpler and less effective method, rather than doing the full work to assess the maximum capacities within the safety regulations. Their information misled the district and community and affected many critical decisions this year.

2) After denying the truth of this information, the District learned the truth on 1/8/21, yet did not share this pertinent information with the community nor the Board. In fact, I would suggest that the administration would not have revealed this information to the Board had it not been for my request, since they had not revealed it until my request was being filled 7 weeks later. This is further lack of transparency. This is information that must be used to judge the Administration’s performance in attempting to follow the Board’s policy directive of getting the children back into school full-time safely and according to the regulations this year. It is critical that this information be used when judging the performance of the current Superintendent and Administration this school year.

The district’s lack of transparency, even with the Board of Education, is puzzling. Why did they conceal this information? What other factors are preventing the opening of the schools? What is the district’s agreement with the teachers’ union? With adequate social distancing, a supply of plastic barriers and staff vaccinations in place, what are the reasons for not reopening schools?

As the weeks go by, and many grow increasingly frustrated with ZOOM school, social isolation and fears for their children, many parents are waiting for answers.