Neighbors React to Nadler's Treatment by the Board of Architectural Review 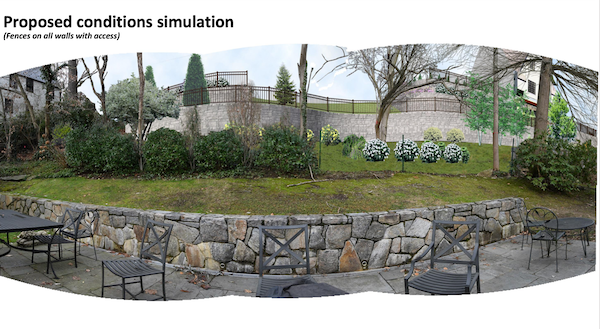 Last week’s article detailing a resident’s unsuccessful fight to stop a developer from building tall retaining walls above his patio elicited several letters. The Board of Architectural Review granted approval to a developer to build a series of towering retaining walls topped by fences on Kingston Road to accommodate a larger yard and a pool. The work will adversely impact the neighbor whose property sits at the bottom of the steep incline.

See below for a letter from a local resident who was adversely affected by the construction of a new house next door and another who followed Nadler’s case and recognized flaws in the system that approved the developer’s plans.

To the Scarsdale Board of Trustees, Village Attorney and BAR:

Based on similar experience to that of Mark Nadler’s disappointing quest for a just BAR and Building Department ruling, I advocate for impartial and fair oversight of real property development balanced with the interests and rights of existing Scarsdale residents. I have lived in the Village for many years and experienced and repeatedly witnessed the economic motivation of the Building Department in support of developers superseding the interests and rightful treatment of Village residents. The scales are definitively tipped by this financial motivation providing hugely increased real estate taxes and other payments.

My experience with the teardown of a beautiful home next door in favor of redevelopment coupled with my unsavory interaction with the developer, BAR and Building Department was untenable and in many respects illegal. I FOIL’ed, I reviewed plans, I reviewed inspections, I reviewed reports, I photographed, I attended meetings, I requested meetings; however, all of my efforts resulted in denial of mistakes identified in writing in building applications/third party reports/inspections. Previously approved construction plans were changed by the developer without my knowledge or consent but with the knowledge and consent of the Building Department. The new dwelling was constructed and has resulted in my having to spend in the five figure range to repair damage to my property sourced to erroneous yet approved reports and amended construction plans. Additional issues created by the new home next door are irreparable. And as will likely happen to Mark Nadler’s home, my home is currently less enjoyable and will be less marketable thus rendering lower proceeds resultant from construction endorsed and approved by the BAR and Scarsdale Building Department.

The response to Mr. Nadler’s letter from Mr. Cutler, the Scarsdale Village Planner, fails to address any of Mr. Nadler’s concrete questions. Further, according to Mr. Cutler’s response, if “…it would be inappropriate for the Mayor…to comment…”, why then did the Mayor comment prior by assuring Mr. Nadler that he would receive fairness in presenting his case to the BAR? Fairness includes presentation of ALL information from Mr. Nadler and all associated experts. Mr. Nadler and his team were denied this opportunity at the BAR meeting. The Mayor must be accountable for his words and lack of actions. Mr. Cutler, the Mayor and the BAR owe Mr. Nadler the opportunity to present his entire case resulting in a fair and unbiased ruling with supporting opinion detail rendered by the BAR.

The system is broken. The response to Mr. Nadler’s letter to the Mayor by the Scarsdale Village Planner is a non-answer, shameful and unacceptable by lack of explanation and assumption of responsibility. This appears to be precedent. I implore the BAR, Board of Trustees, Scarsdale Attorney, and other responsible parties to rectify and render fair the real property redevelopment process in Scarsdale balanced with equal consideration of Scarsdale residents’ rights.

Quintessential Scarsdale homes are torn down and replaced by the proverbial McMansion or massive additions are built which materially alter a home’s original character. And, oftentimes every square inch of buildable land is used, taking away our trees and green space.

Granted, weighing the rights of the property owner against the environmental and aesthetic impact that these material changes produce is an ongoing discussion. Just as its name reflects, Scarsdale’s Board of Architectural Review (BAR) is responsible for the review of architectural plans, and that review could use several improvements to help preserve the aesthetic and environmental health of our village. The following are recommendations regarding how BAR, as well as the Zoning Board of Appeals and Planning Board, review can be improved:

(1) Neighbor notification should be expanded beyond the 200 foot requirement. Currently, with respect to residential uses, applicants must give written notice to the owners of every property within 200 feet of the boundary of the property involved in the application. (For commercial uses or other public uses, the requirement is 500 feet.) However, quite often, neighbors beyond the 200 foot limit are impacted by the project and should be given notice.

(3) In the event an application is held over to a subsequent hearing, neighbor notification of the next meeting date should be required. There is currently no such requirement; it is simply within the board’s discretion to direct that notice of the next hearing date be given to neighbors.

(4) An appeals process should be granted to a neighbor who is materially affected by the BAR’s determination. Currently, only the applicant can appeal a BAR decision.

(5) Review of landscape plans must be emphasized as a critical part in the BAR review process. Currently, it is unclear who, if anyone, reviews landscape plans submitted to the BAR.

(6) A consistent policy and guidelines as to what is considered aesthetically acceptable should be established. For example,
there appears to be an inconsistent policy as to whether a circular driveway on a small front yard is acceptable. At one BAR meeting, a small front yard parking area that would allow a car to be parked parallel to the street was rejected as being unsightly while at another BAR meeting a month later a circular driveway on a small front lawn was approved.

In addition to improving land use review, two important changes to our Village Code should be made. First, Scarsdale’s floor area ratio (FAR)-- which is the maximum floor space that can be constructed on a piece of land-- limits should be lowered. Article XVI of the Village Code, which establishes the maximum FAR allowed, sets forth, in part, that:

The recent trend of tearing down existing houses and replacing them with larger houses or building large additions to existing houses threatens the appearance and impacts upon the health, safety, welfare, and quality of life of Scarsdale.

The existing FAR code provisions do not adequately address these pressing issues.

Likewise, Scarsdale’s lot coverage provisions should be revised. Article IV of the Village Code sets forth lot coverage restrictions, and like the Village’s current FAR maximums, must be reduced. As the Code specifically acknowledges:

Excessive coverage of lots with structures and impervious surfaces can limit adequate light and air; cause overcrowding of land; lead to drainage and flooding problems as a result of reduction in the land's water absorption ability; affect the character of the community; and have an adverse impact on neighborhood aesthetics.

Last year the Village drafted amendments to the Village Code regarding bulk and FAR. Though the amendments are not strong enough, they are a step in the right direction. The Planning Board, on March 24th, will hear public comments on these amendments. Click here for more information.

Scarsdale must continue to refine both its code and its rules and regulations in order to address the pressing health, safety, welfare, and quality of life issues presented by land development in our village.