Remain Committed to Common Purpose, to Common Good, and to Each Other 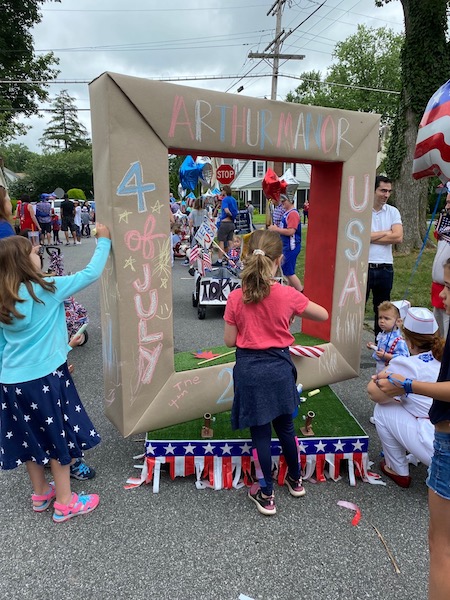 What a great parade – it’s wonderful we can all be together again. Thank you to the marchers, the Arthur Manor Neighborhood Association, and the police and fire departments for helping make this celebration happen.

As we gather, we should take a moment to think about what it means to be together on this day. For independence, and INTERdependence, go hand in hand.

This nation, this village, sprang from the beliefs of a group of fierce individualists. But those individualists knew they needed one another – and many others – to accomplish their goal of forming a new country against the opposition of the most powerful empire on earth. Individuals alone couldn’t achieve that.
The Declaration of Independence, transforming “these united colonies” into “the thirteen united States of America” was the expression of that ideal, with its authors’ intellectual passions fired by the likes of Locke, Rousseau, and New Rochelle’s own Thomas Paine.

As Paine famously wrote in his “Common Sense,” published in January 1776, “It is not in numbers, but in unity, that our great strength lies; yet our present numbers are sufficient to repel the force of all the world.”
Our nation, our community, and the world, have had an extraordinarily difficult this past year and a half. This is a period that will be viewed by future historians as a testing time, a time that has frayed communal ties and provoked doubts about our common path forward.

But in uncertain times we need each other more than ever – Scarsdale has demonstrated just that over the decades and centuries, across revolutionary and world wars and past pandemics. Ours is a village rooted in that history, and it only survived that history through the sacrifices of all the generations that came before us. In fact, it could be argued that after the troops of General Washington and British General Lord Howe marched through Scarsdale, the opening shots of the Battle of White Plains, just three months after the Declaration of Independence, were fired in Greenacres.

To be true to those roots, and to the ideals of the Declaration, we need to remain committed to common purpose, to common good, and to each other. We need to reaffirm our commitment to a sense of community.

Sixty years ago today at Boniface Circle, Scarsdale Mayor Alden C. Smith delivered a remarkable Independence Day speech. It was a speech both of its time and somewhat timeless. Six months into John F. Kennedy’s term as president, it viewed America’s role in the world through a Cold War lens, emphasizing the need for the United States to remain a beacon for emerging nations in a global competition with Communism, as expressed through the struggle for Civil Rights in the South and the Space Race.

But Mayor Smith’s words also reach across six decades to remind us why we need each other, and our common ideals, and our commitment to community.

Said the Mayor: “The ways in which we are alike and the courage of the Colonists who wrote the Declaration of Independence are fine things to talk about, but how are these things useful to us today ⎯ how can they be made into tools that will secure our present and reward our future?  … we can cite our differences, but differences have never given men unity or understanding or compassion. But, knowing the ways in which we are alike and building on them, expands our tolerance of one another and our ability to help other men.”
…Every man, woman and child should be taught our goals as a nation. In the free exchange between the electing and elected it is our duty to assure that we have proper leadership. But to do this we must learn to think in terms of greater causes and not just in terms of self and what is good or easy or comfortable.”
Mayor Smith concluded, “…on this day when we celebrate our independence ⎯ our freedom ⎯ and every American should be proud and conscious of his heritage, we should solemnly vow to pursue in our daily lives the paths which will assure that we pass on to coming generations the heritage bequeathed to us.”
Worthy words indeed.

So my appreciation again to everyone who took the time this morning to honor our nation’s independence, and who took a moment to think about how we got here and how we can best go forward together toward a brighter common future.
Thank you.