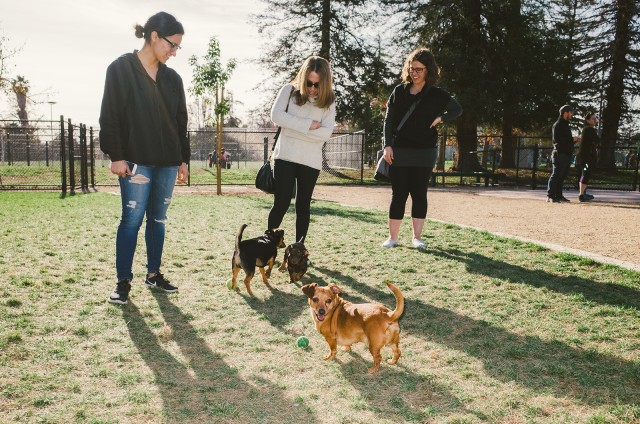 When we last covered the possibility of a dog park in Scarsdale, the response from the public was so negative that we called the article, “Not in My Backyard: Residents Growl About Proposed Dog Park.”

That was November 2018 after the Village had retained consultants JMC to examine the feasibility of a dog park at the Weinberg Nature Center. At the time, the Quaker Ridge Neighborhood Association and residents who live nearby had a host of reasons for why this site should be turned down. They raised concerns about traffic on Mamaroneck Road, preservation of wildlife at the nature center, tree clearing to create parking, the size of the site, use by people who don’t live in Scarsdale, barking and dog waste.

Similar arguments were made against building a dog park at Drake Park and Crossway Fields.

However, with dog owners pining for a place to meet and run their dogs, the Village continued to pursue options and eventually began discussions with the NYS Department of Transportation on the feasibility of creating a dog park by licensing a site between Mamaroneck Road and the north exit ramp of the Hutchinson River Parkway. The Village submitted a concept plan to the DOT in July 19 which would not involve tearing down trees. The proposed site would be about one acre in size.

Now two and half years later, the Department of Transportation has still not approved the plan due to the proximity to the parkway. The DOT also asked for the entire site to be fenced in. According to Superintendent Coleman, the Village plans to resubmit the application with the proposed changes. Coleman expected a decision in two months.

But resident Josh Frankel said he recently spoke to someone at the NYS DOT and concluded that it is “highly unlikely that the state is going to change their mind because the site is too close to the Hutch.” Frankel said, “You are barking up the wrong tree here.” He said the Village would get resistance from “folks on Mamaroneck Road and Colonial Road.” He suggested that the Village look into building the dog park at the maintenance facility where he believes there is ample room for a dog park and parking.

While the Village continues to pursue a permanent dog park, Recreation Superintendent Brian Gray presented an alternative idea. He suggested that the Village consider building temporary or pop up dog parks that could be constructed using temporary materials and stand for a month or two. The sites would require an 80 X 80 foot area, less than the acre for a permanent site.

The four potential sites he presented were Drake Park, George Field Park, the Freightway Garage and the lower parking lot at Village Hall.

He proposed three fencing options and associated costs that you can see below. In addition to the fencing, the Village would need to rent porta johns, purchase waste stations for disposal of dog waste and synthetic turf if the parks were built on concrete surfaces. 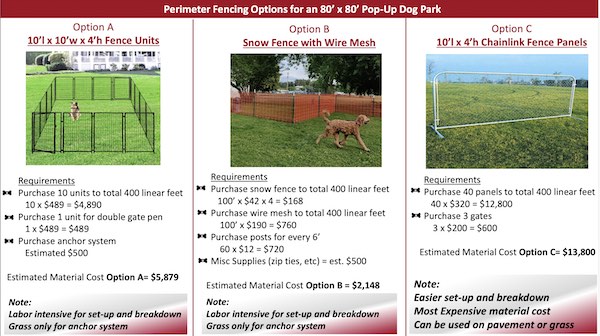 The proposal elicited many comments.

Trustee Lena Crandall asked to get estimates of costs for monitoring of the parks, clean-ups and enforcement of use by people with dog licenses. About the three scenarios for fencing, she favored “C” because it is easier to set up. She wondered if the Village could rent the equipment out when it was not in use to help to fund the parks. About alternative proposed sites she said, “about Chase Park I am concerned about parking. You can’t find a parking space in the Village during the week or on weekends.” And about George Field, she said, “I am against a permanent installation in George Field because it’s for flood mitigation and I would not want dog waste getting into our water system.” She also called for dog owners to buy licenses.

Trustee Whitestone agreed. He said, “The number of dog licenses has been about 400 in the last ten years – and is now at 268 – which is appreciably down.”

Trustee Ahuja asked, “Why are we not focusing on a permanent solution? This is time consuming so let’s look for a permanent place for a dog park.”

Trustee Arest said, “For the pop ups, we need enforcement and restrictions for use.”

Greenacres Neighborhood Association President Andrew Sereysky spoke in favor of a dog park and said, “We started on this journey six years ago.” He said SNAP was unanimously in favor of a park, but “it has been slow going.” He asked if the pool complex could be considered for use from Labor Day to Memorial Day. He said, “what are the alternate plans if we don’t get approval from the state for the Hutchinson River site.” He also discussed an event that the GNA held in George Field Park for dogs a few years ago. He said, “I think the idea of a pop up dog park is interesting, I am just not sure how you go about it.”

Madelaine Eppenstein said, “I applaud the effort and hope there is progress,” and Bob Harrison said, “I support this idea.” Susan Douglass heartily supported the idea and asked if the fees residents pay for dog licenses could be used to build a dog park. She also noted that the garbage bins for dog waste in Scarsdale are always overflowing.

Discussing the use of other locations, Superintendent Gray said, “The pool is a good site but the pools are half full (of water) year round – if something fell in it would not get out. We also have irrigation – and that could be damaged with the fence construction. The sanitation lot is smaller – we were looking for sites that were an acre or more in size.”

NIMBY opposition remains. Carol Schechner said, “I live downhill from Drake Park – I was not happy to see it in the popup scenarios. The concern about dog waste is real – dog waste needs to be cleaned up daily. Dog parks attract rodents.”

Mayor Jane Veron concluded the conversation by saying, “In terms of next steps I will ask staff to come back to us with a proposal that seems right based on this input.”