(Updated January 3, 2023) This is the opinion of Scarsdale10583 Publisher, Joanne Wallenstein.
An estimated 700 people turned out for a story hour with actor and evangelist Kirk Cameron at the Scarsdale Library on the afternoon of December 30, 2022. Cameron, the author of children’s book, “As We Grow,” exploited free speech laws to hold his event at Scarsdale Library. Cameron and his publisher Brave Books targeted Scarsdale because the library held a “drag queen” story hour and Cameron is preaching against what he calls “woke ideologies” in school and libraries, objecting to gay marriage, transgender and LGBTQ people and abortion. About public schools he says, “America's public schools have become incubators for far-left progressive agendas, including critical race theory, gender ideology, and Nikole Hannah-Jones' 1619 Project.”

Though the story hour was held during vacation week, right before the New Year, the word got out to sympathizers who arrived early to line up to attend the event. The library was quickly overwhelmed as only 170 people could fit into the Scott Room. The crowd formed lines from the lobby to the children’s room, from the café to the rear of the library with another line outside. 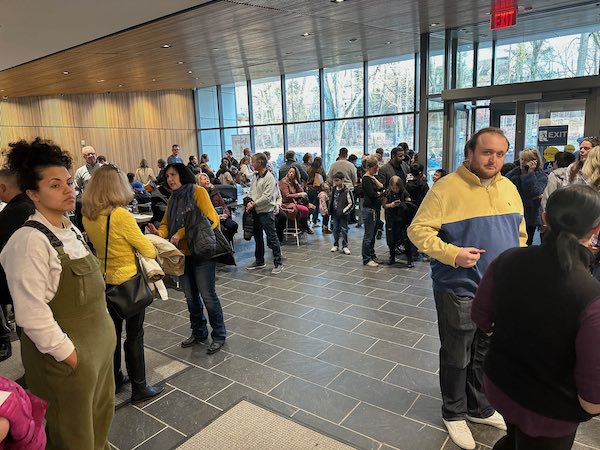 The library staff, along with Scarsdale and county police were on hand to regulate the crowd. According to Scarsdale Police Chief Andrew Matturro, “Lieutenant Carroll, the Detail Commander estimated the number of people to be approximately 700. He also reported that there were 2 readings in the allotted timeframe and 170 were in each reading. There were no incidents reported. Six Scarsdale officers were supported by six County officers for traffic and crowd control. The event concluded on schedule.”

Attendees who were able to get inside said that the reading was handled well by the police and staff and was calm and at no point became unruly. Though no one knows where all the people came from, there seemed to be few Scarsdale residents in the crowd. The library’s parking lot filled up quickly, and cars overflowed to Tompkins Road, Brewster Road and even into the Scarsdale High School Parking lot.

Though it was billed as a story hour for young children, the visitors included grandparents, parents, teens and toddlers.

Only one session was planned, but the library permitted two to accommodate more visitors. At the end of the second reading some requested a third session to allow the last of the crowd to get in, but the time allotment was over and the library staff asked everyone to leave.

What does this bode for the future? Will other outside political groups request use of the community’s new library? This event demonstrates the strain these type of gatherings put on Village resources. Extra police coverage from the Village and the county was required, as turnout was unpredictable and the building could easily become overwhelmed. Who should pay for this coverage?

Furthermore, the event prevented regular visitors from the use of the facility. Rather than assisting residents, the entire staff was called upon to control the crowd. The meeting room, designed for a maximum of 170 could not accommodate the turnout.

Do the rights of political groups from outside the community trump the rights of residents? Perhaps the library can re-examine their bylaws to draft workable parameters for use of this public space. These are questions that the Library Board and Village Board will need to examine in upcoming months.

We asked Scarsdale Library Director Elizabeth Bermel a few questions about story time and here is what she shared:

Please let me know where you think all those people came from and how they were mobilized? We did not inquire. As a public library, we are open to all. Given the large turnout, we were pleased that there were no incidents.

Were you concerned about the safety of the staff and security of the building? The Scarsdale Police Department and their public safety partners did an outstanding job to ensure the safety of staff and public.

What message does this event send to our library and others for the future? The Scarsdale Library's mission (to encourage the joy of reading, the exploration of ideas, and the pursuit of lifelong learning for the children and adults of our community), has not changed. Our mission, vision, and values inform our response to challenges and help to maintain our reputation as a premier cultural and educational institution. By viewing challenges through this lens and always engaging in a manner consistent with our values, the Scarsdale community and our patrons will always see and experience the Scarsdale Public Library as a treasured community asset, and a model for other public libraries. The community has always been supportive and involved with their library, and we hope they will continue to engage with us as we find ways to best support our mission.

Commenting on the event, Mark Gompertz, Group Editorial Director at Skyhorse Publishing and a seasoned executive in the industry said, "I read the article and it it does a wonderful job of explaining the complexities of free speech in a public space. It is a thorny question for sure. While I’m not sure how I feel about all the outsiders coming into the community, I applaud the village/ library for allowing it just as I would a story hour about a drag Queen even if alt right groups didn’t feel it was appropriate. Crazy world."