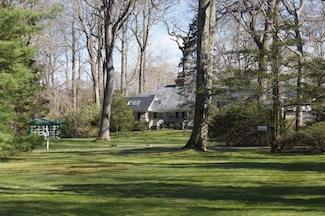 Scarsdale had more water on the brain this week when a team from the KOS Building Group appeared before the Planning Board on May 22 to seek approval to build six new homes on an 8.4-acre tract that runs along Garden and Cushman Roads. These homes would replace two homes on Garden Road, one on Cushman and another on Woodlands Place. Sixty trees would be removed to clear and grade the property. An application would be filed to the Village Board to remove Woodlands Place, a paper street off Cushman Road, from the Village map. The group has been attempting for years to prove that the property's high water table should not prevent it from being developed and last went before the Planning Board on October 24, 2012.

At Wednesday's meeting a lawyer, engineer and landscape architect representing KOS came before the Planning Board to review documentation to show that their storm water retention plan could handle all of the site's runoff and would not impact neighbors on either side or downstream.

The lawyer drew a chuckle from the crowd in the room when she claimed that the "Scarsdale Village Comprehensive Plan shows that this is not a flood basin." She said that KOS had met all requirements and submitted a storm water plan, an erosion and sediment control plan, followed five steps to get a DEC permit, incorporated green technology, submitted a tree removal plan and provided for a maintenance bond to ensure that the Cultec retention system would be properly maintained in the future.

The Planning Board retained an engineer from D&B to review the KOS building and storm water plan. He testified that given the ground water level numbers he was provided the proposed system should capture water in retention basins and have it infiltrate into the soil. The developers claimed that the ground water is 6 ½ feet below ground, and if so, during rainfalls, the ground water would have to rise by three feet before it reached the Cultec basins.

However Robert Falk who lives at 3 Willow Lane, directly downstream from the property, questioned these water level measurements. Appearing with an engineer and a lawyer, his team asserted that "the property is a very sensitive area and that "the conclusions of the study were not meaningful if the underlying assumptions were faulty." They believe that the seasonal high water measurements may be higher than those submitted by the developer and asked the Planning Board to require a "deep hole water test" to assess historic water levels. Falk even agreed to pay for the test provided that it found that the ground water level was accurately reported by KOS's engineers. He wanted the testing done so that he could be assured that high ground water would not fill the Cultec system and prevent it from taking up space for storm water retention.

His team also asserted that the analysis was done during a period of rainfall deficit and that groundwater levels are far lower now than they were in 2007 when Scarsdale experienced 63 inches of rain as compared to just 27 inches in 2010-11.

Bob Reiffel, Chairman of the Middle Heathcote Water Committee, who lives downstream from the property also appeared at the meeting and said, "We have suffered damage because of the Village's inability to handle the water. Whenever there is construction it results in additional runoff. This is a wetlands. The measure of groundwater during a time of low rainfall does not give an adequate measure of the need for protection. The Village is struggling with a $2 million project to stop water from running into the bathtub in which our home exists. Until the Village has taken the necessary actions to alleviate flooding in our area you cannot let additional water get into the system."

Lika Levi of 21 Lockwood Road said, "Tonight I am sad that I have to appear in front of this board. I am sad that a property that is already wetlands is considered for more damage. We cannot let developers develop anymore. We cannot consider additional homes on wetlands."

Mona Longman of Varian Lane, across the street from the proposed development said, "I take offense at the idea that this is not a flood prone area. In 2004, 2007 and 2011 our cul de sac became a lake. Water came up and seeped into our homes. The infrastructure in this area is already beyond capacity -- I don't know how you can allow development in this area. If the groundwater rises to a certain level, the system will not function."

Jim Mittenthal from 104 Garden Road agreed with Longman, saying, "I take exception to the idea that this is not a flood zone. My home was damaged by Hurricane Floyd in 1999, by a storm on April 15, 2007 and by Hurricane Irene. The applicant has already clear cut areas adjacent to our home and it has impacted my property."

A lawyer for Allen and Barbara Bachrach of 99 Cushman came forth to ask for conditions be placed on this development that would preclude further development on the remaining seven acres. He said, "I ask that these plans be disclosed now. I don't know if they have further plans but this would be the time to share them."

Another resident of upper Garden Road said, "Our sump pumps overwhelmed often. I question whether water is a few feet below the surface. In my yard the water level is at the ground surface. My yard is a wet sponge. On Garden Road, we feel we are in a flood zone."

David Menashi at 111 Cushman Road said, "My property abuts the property. About once or twice each winter we have 6-8 inches of water above ground that creates a lake in our yard that takes about 72 hours to drain. This area is wet.

Planning Board Chairman Seth Ross gave all the attendees additional time to speak and then closed discussion on the matter. The Board's decision will be posted on the Village website.