Should Marker Tag, AKA Assassin, Be Permitted at SHS? 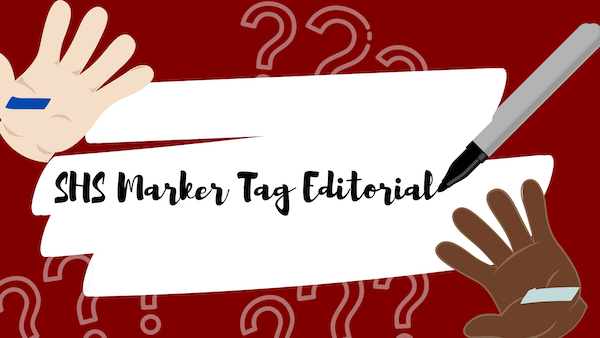 (This article and illutration, were submitted by SHS Senior, Sydney Piccoli)
Marker tag, once known as assassin, is a senior class tradition at Scarsdale High School with no ties to the administration. Seniors pay an entry fee, which is then divided by the marker tag facilitators into first, second, and third prizes. Although there are several rules about perimeter and safe-conduct, the game’s general gist is that each participant is assigned a “target” that they must slash with a washable marker, which represents their elimination. The participant then assumes a new target and so forth until three people remain to claim their respective prize.

The Scarsdale High School administration has a long-established history of condemning marker tag. But is it a harmless tradition that restores the energy of a slumping senior class? Or is it a symbol of the ignorance that persists in Generzation Z, which has experienced a historic number of school shootings? Does the game incentivize violence or is it just that—a game?

Generation Z has grown up watching news reports of school shootings, mourning victims, and re-evaluating how safe they feel in schools. The last thing anyone would expect is for Scarsdale High School seniors to make light of school shootings. Over the years, marker tag has undergone dramatic changes to adapt to the current political climate and become more sensitive toward mass shooting victims. A few years ago, Scarsdale students transitioned from referring to the game as “assassin” to “marker tag.” Whereas assassin has commonly been used to describe school shooters, marker tag has no ties to school shootings and clarifies that it is indeed a game that should not be perceived as anything else. Furthermore, Scarsdale students now use markers as “weapons” compared to neighboring schools, who use water pistols and Nerf dart guns.

One could easily see how students running around wearing all black, holding toy guns, and shooting one another could easily prove insensitive and cross the line from enjoyable to inappropriate and malicious. But, students hiding behind lockers and trees trying to draw on each other’s hands with markers feel innocent enough. If more changes are made, such as not referring to the people as targets to be killed, but rather participants to get out, what is the harm? How would that differ from elementary school students playing tag on the playground?

Teachers and administrators have cited that seniors coming in fully covered makes it difficult to decipher whether or not they are a student or a person intending to harm Scarsdale High School seniors. The organizers and participants of the game have made changes, limiting where a person is allowed to be marked to prevent students from covering their faces in school. Furthermore, those opposing marker tag believe that the act of students killing one another can be too closely likened to school shootings. If it’s just an issue of how the game is being perceived, it seems as though it would be better for seniors to adjust the language they use for the game as opposed to not playing it completely.

Spanning decades, marker tag has become a staple tradition for Scarsdale High School seniors alongside prom, homecoming, and senior chalking. After three and a half years of hard work, students look forward to the rare opportunities they have to escape the chaos and stress of school and rejoice in time spent with their classmates. Marker tag fosters bonding as seniors form alliances with their friends and complain to one another how wearing long sleeves and sweatpants in the middle of March for the competitive edge is “totally worth it.” By the time marker tag rolls around, seniors are already mentally checked out, so it seems like banning the
game because it is “a distraction” feels obsolete. Students are also allowed to play marker tag or not, which means each individual can dictate whether or not they would like to sacrifice their time and money to join in.

Although Scarsdale High School seniors playing marker tag has remained a tradition, the world has and will continue to change. There was a time when a school shooting proved to be an anomaly, but it is 2022, and there have been 103 school shootings since 2018. The actions we take must reflect the current circumstances of the world. As of right now, outlawing marker tag seems to be an unreasonable course of action considering how many students enjoy the activity and form a community around playing. Scarsdale students have also taken proactive steps to make the tradition more sensitive to the victims of school shootings and appropriate overall, which should be recognized. If the administration continues to voice specific concerns and the student body works to adjust them, it seems as though the Scarsdale High School tradition of marker tag could continue for years to come.