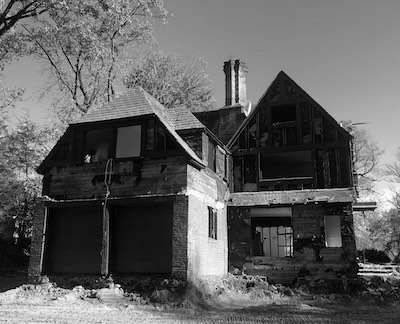 Frustrated, disappointed and horrified … those are just a few of the words the members of the Scarsdale Committee for Historic Preservation (CHP) used to describe their feelings about the illicit destruction of a historic home at 41 Hampton Road.

In short, an application to raze the home was pending before the Committee for Historic Preservation this summer. The Committee had solicited the opinion of Architectural Historian Andrew Dolkart who found that it clearly met Scarsdale’s criteria for preservation. In late July, as a courtesy to the applicant, the committee deferred their vote until the following meeting when the full committee could be present. However, before they reconvened in early September, the developer tore down a good portion of the original dwelling and stone entry and removed the remaining structure of its historic features.

He left a shard of what was once a stunning example of a historic period in the development of Scarsdale.

Commenting on what remained, Dolkart said, “There is nothing left on this site worthy of preservation. The exceptionally fine Tudor Revival style house built on this lot in 1929 has been substantially demolished. The entire entrance and living wing that comprised the southern portion of the house is totally gone. The remaining portion of the house has been shorn of much of its brickwork, including the siding on the first floor and the infill between the half timbers on the gable. None of the character defining features that made 41 Hampton Road a quintessential Scarsdale house survive. There is nothing left to save.”

The developer, Eilon Amidor then filed a new application to take down the remaining piece of the house, claiming it was structurally unsound. The Committee considered the application at their November 30 meeting and held it over until December 14 to allow time to get an opinion from Dolkart and an engineer’s report on the state of the structure. Property records show that Amidor purchased the home for $2,150,000 in September, 2021. He plans to replace the 4,300 square foot house with one that is more than double its size.

At the opening of the December 14, 2021 meeting, CHP Chair Adam Lindenbaum reviewed the procedural history and said, “This has proven to be very frustrating for the committee…. Some of our worst fears were realized….The committee was treated without respect…. A lot of these details are gone – it could have been avoided but we are where we are.”

He said, “I don’t think we should prolong what is going to be a difficult situation,” and proposed that the committee not vote on the application. He explained, “That way he (Amidor) can wait 75 days from the date of his application – sometime in late January -- he could get his permit from the Building Department.” He said, “If we approve the application, we reward the applicant for subverting the process.”

He concluded, “We can take solace that this will not happen again.”

He then invited the committee members to comment. Kevin Reed said that he had made his thoughts known at the earlier meetings, but for this decision he said, “I concur with you on how we should proceed.” 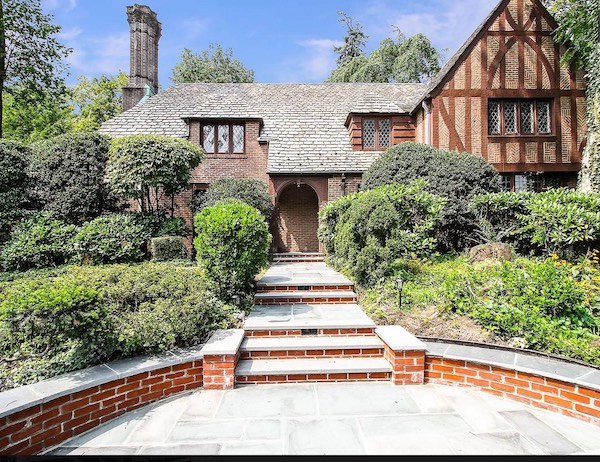 The original home that stood at 41 Hampton Road.

Lauren Bender said, “I was shocked and upset at what happened – horrified. I think Adam gave a lot of thought and deliberation to this matter.”

Wendy Goldstein said, “I agree – I am equally saddened and will put it behind us – I would support not voting.”

Talaiya Safdar thanked Adam for creating this way of handling this situation and said, “I share everyone’s frustration. I lived in that house and I know first hand what has been removed.”

Commenting virtually, resident Jeffrey Osterman from Oak Way said, “I have closely followed the situation. It is important to us that the CHP treats everyone fairly and equitably.” He questioned the calculation of the demolition percentage and that it should have included the floor area along with the surface of the elevations and walls.” Lindenbaum encouraged Osterman to remain active in amending the village code. He said, “I am sure the trustees will appreciate your input.”

Dara Gruenberg of Hampton Road thanked the members of the CHP for being thoughtful and for their service. She said, “As a neighbor on Hampton Road I am horrified about what happened. I live on the street and I have not met anyone who is in support of this. I hope people will think twice before using the builder or the architect.”

Committee member Jonathan Lerner said, “I think he did violate the code and a fine might be involved. His argument is – now we’ve torn the building now and now there is all this damage. They have allowed the property to fall into disrepair.”

Frank Diodati from the Building Department said, “There is a summons out.”

Amidor said, “We flatly deny that we did anything wrong and Manuel Sostre sought to deny responsibility, saying “ I was hired by Mr. Amidor to design the best possible house for that property. I have worked on restoring beautiful homes in Scarsdale. Mr. Amidor did what he believed he was allowed to do.”

We followed up with Village Manager Rob Cole to learn more about the summons. He said, “The Village’s legal counsel reviewed the situation and said it would be appropriate for the Building Inspector to issue a summons for violation of the Village Code 182.4.”

This code prohibits the demolition of a building that has been referred to the Committee for Historic Preservation. It says, “Notwithstanding any inconsistent provisions of the Code or of any rule or regulation concerning the issuance of building or other permits, no person shall carry out any demolition of a structure which the Building Inspector has referred to the Committee as a potential historic building without first obtaining a certificate from the Committee or Board of Trustees as provided in §§ 182-7 and 182-11 or a written statement from the Committee that the structure does not meet the criteria set forth in § 182-5 and is not an historic building. The certificate required by this section shall be in addition to and not in lieu of any building or other permit that may be required by the Code or any state law or regulation.”

According to the Village Attorney, Amidor is clearly in violation of that code and has therefore been issued a summons. The case will be heard in Scarsdale Village Court on January 12, 2022 and the public can attend. If he is found guilty, the maximum penalty for the violation is $50,000.

Cole said that the Village Code is clear on this matter and that Amidor did not exploit a loophole or do an end run around the law. He simply violated it.

Cole said the Village Trustees will “look for ways to further strengthen the existing code in 2022 in order to protect as many treasured assets as we can.” He said the Village will hold a public work session and asked residents to participate in the process of amending or strengthening the laws and discussing additional enforcement of existing laws.