As Deadline Approaches, Trustees Examine the Impact of the New Marijuana Laws on Scarsdale

Cannibis CafeWill the streets and parks of Scarsdale soon smell like we have been skunked? Now that the use of marijuana is legal in New York State, should Scarsdale permit marijuana dispensaries and smoking lounges to open in the Village? That was the topic of a work session of the Scarsdale Board of Trustees on Tuesday October 26, 2021.

Under the new state Marijuana Regulation and Taxation Act (MRTA), the Village has until December 31, 2021 to decide. If they fail act or opt out, dispensaries and lounges will be permitted and the decision cannot be reversed. If they opt out for now, they can choose to opt in at a later date.

Much is still up in the air because the state is creating an Office of Cannabis Management governed by a Cannabis Control Board. However, to date, only a few people have been appointed to the Board and no regulations have been developed.

In order to listen to the facts and gather public information, the Scarsdale Board of Trustees held a work session led by Village Trustee Karen Brew.

Village Attorney Daniel Pozin explained that local governments can pass laws regarding the time, place and manner of dispensaries and lounges. But these laws would also regulate the use of tobacco. So if the trustees decide to ban the use of marijuana in public areas, then smoking tobacco will also be banned.

Anticipating that marijuana dispensaries and lounges might cause smokey streets, the Village has drafted proposed code to restrict smoking at all Village owned properties. This new code can be passed independent of the Village's decision on cannabis.

Specifically, smoking (anything) would be banned in the following places:

(1) Smoking within any building or structure, including any main entrance to such facilities, owned, and controlled by the Village of Scarsdale.

(3) Smoking within any vehicle owned by the Village of Scarsdale.

B. Smoking indoors in the Village of Scarsdale shall be governed by the Article 13-E of the New York State Public Health Law, which is also known as the Clean Indoor Air.

Pozin explained that local authorities can decide whether they want dispensaries and consumption lounges in their community. They can adopt a local law to opt out. However, if they don’t do it before December 31, 2021, they can never opt out. If they do opt-out they can opt in at a later date.

The cost of opting out is the loss of 3% of the retail tax on marijuana sales. Under the new law, the county will collect the 4% tax, they will keep 25% and give 75% to the local municipality. Discussing potential revenues from dispensaries and lounges Assistant Village Manager Ingrid Richards presented numbers that showed that the average revenue per store was $6 million. She projected that if Scarsdale opted in, the village could receive $200,000-$500,000 in additional annual revenues. However, later at the meeting Anne Hintermeister challenged those projections saying they were based on sales in vacation communities in the Berkshires that bordered NYS and major highways. She believes that revenues would be far lower.

Assistant Village Manager Ingrid Richards surveyed all communities in Westchester County to see where they stand on the decision. She found that:

Two of Scarsdale’s closest neighbors, White Plains and New Rochelle have decided not to opt out. Therefore there will presumably be dispensaries and smoking lounges in our closest neighboring towns, making marijuana easily accessible for Scarsdale residents, even if we do opt out. In this case residents could purchase cannabis but Scarsdale would not benefit from the revenue.

Richards also pointed out that those towns who make no decision, which is 42% of the list as of now, are essentially opting in.

Village Planner Greg Cutler showed a map where dispensaries and lounges could potentially be located. They would not be permitted near schools, religious institutions or childcare centers, but could be sited on Garth Road, Scarsdale Avenue, Christie Place, Spencer Place, Boniface Circle, East Parkway, and in the Golden Horseshoe Shopping Center. 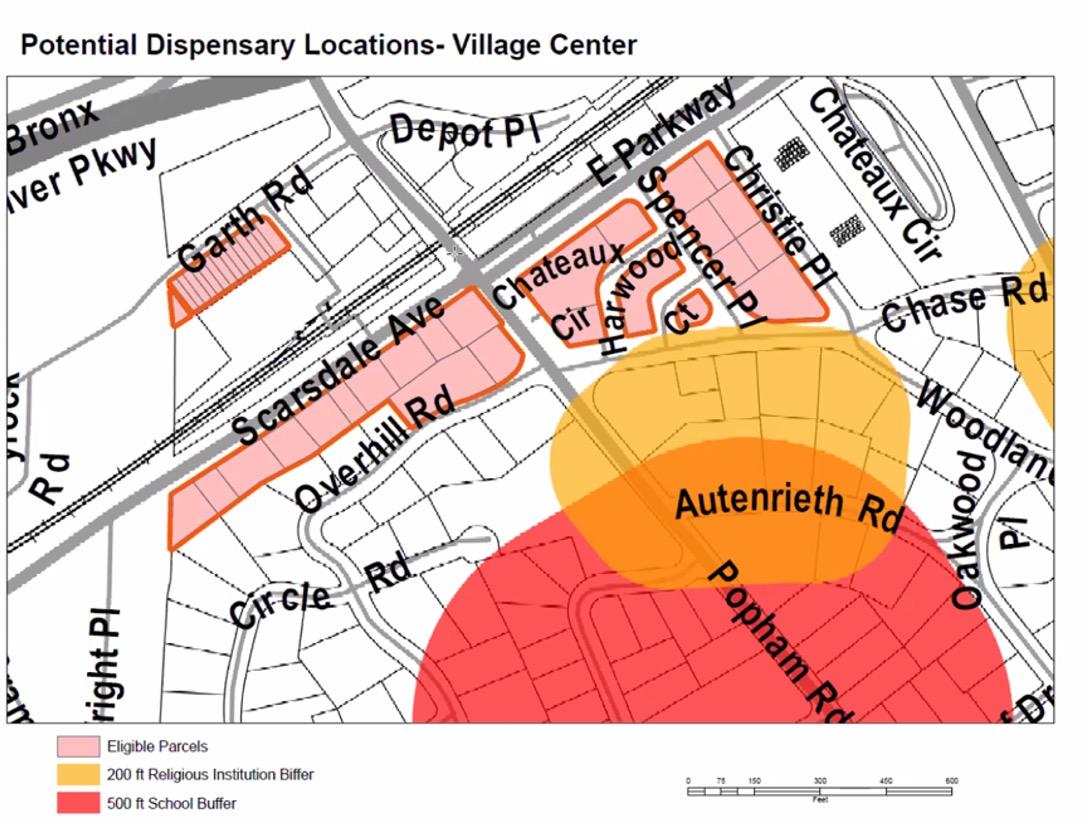 Cutler does not know what the impact of the presence of a dispensary would be on sales at other retail shops nearby.

Joshua Glantz of Claremont Road spoke in favor of allowing dispensaries and lounger in the Village. He claimed that research shows that in states with legal cannabis use, teen consumption declined. Why? Because it decreases the sale of illicit drugs. He also said that accessing cannabis at a legal location is more difficult than accessing alcohol. According to Glantz, there are limits on the amount of cannabis that you can purchase. In areas where cannabis is legalized, it has led to an increase in parental awareness and discussion with their children.

Furthermore, the National Association of Realtors found that that there is an increase in demand for commercial properties in areas where cannabis is legal.

However, representatives from Scarsdale’s Drug and Alcohol Taskforce strongly objected to the sale and use of cannabis in the Village of Scarsdale.

Speaking for the Drug and Alcohol Task Force, Coalition Coordinator Lisa Tomeny stated that the age of first use is a critical risk factor for later adult use. She said, “As a community we can affect our attitude and the availability of the product. We do have a say about the location of dispensaries. The higher the density of the outlets, the more severe the impact.”

Discussing the content of marijuana that is sold, she pointed out that there is no regulation of the concentration of THC and that it has been growing over time to make more potent products. In addition, sellers market to children and teens by packaging marijuana to imitate cereal boxes with names like Cap’n Munch, Chronic Toast Crunch and Frosty Loopys. Sometimes these products are consumed by mistake by young children.

She concluded with a warning. “Scarsdale will have no regulation of the products that are sold. We are being asked to make a decision now when we don’t have clear rules from the state. It could be a very costly mistake.”

Also for opting out was Linda Richter of Mt. Joy Avenue who works for a non-profit that monitors research on youth substance abuse, policy and prevention.

In response to the comments from Joshua Glantz, she said, “I would push back on the contention that legalization allows parents to discuss this more with kids. This is not true. The perceived approval makes it worse…. It will be more available. The two main things that drive kids usage is accessibility and exposure. Allowing the dispensaries sends a message that it is okay to use.”

Kaitlin Higgins, a student at SHS said, “There is already an issue of usage on school grounds during school hours. … Vaping used to set off fire alarms -- this affects everyone in school. Vaping is a gateway to harder drugs. Having more dispensaries will make it easier for kids to get their hands on it. The Golden Horseshoe and Chase Park are places where kids hang out – the dispensaries would be too close to that location. There is no harm in opting out. It is not an accident that 50% of communities have opted out.”

Karen Brew read a statement from Trustee Lena Crandall who studied the issue but was not at the meeting. She said, “In my opinion we should opt out of lounges because we live in a community where most people travel by car and I worry about driving under the influence. However I have changed my mind about dispensaries. Our retail community will benefit, we will get additional revenue, we can regulate the sale and it will be convenient for local residents.”

The Mayor then invited public comments.

Marian Green spoke first as the Chair of the Council on People with Disabilities. She said her committee was focused on the medicinal value of cannabis and said, “It would be helpful to some.”

Mitch Kulick of 8 Park Road said he is an attorney who represents cannabis sellers. He said, “New Rochelle is opting in. Does Scarsdale want to benefit from having it in Scarsdale? Maybe we can’t opt in later –the state issues limited licenses. There is a real possibility that this is a one-time thing – it is a bit of a red herring.”

Kulick added, “I was just at an opening. The shop in Hartsdale is not what a dispensary looks like at all. The windows are opaque. It looks like an Apple store.”

Anne Hintermeister said, “We based our revenue estimates on sales and resort towns in the Berkshires at a time when there were no places to purchase in surrounding towns…. Lee, Lenox, Stockbridge… Before we jump to the conclusion that we could expect to receive these revenues we need to sharpen our pencils. We don’t have college students, tourists, billboards, an interstate passing through etc. Look at sales from an average dispensary in an average community.”

Richter said, “Marijuana disorder is the primary reason teens enter into addiction programs. Parents feel abandoned when the government allows the sale of marijuana. It makes it very difficult to enforce rules. This would be a big burden on parents.”

Marian Green, speaking as a resident said, “People are mail ordering marijuana, you can have a courier bring it or get it via Fedex.”

Wendy Gendel of 100 Brookby Road said, “I ask the trustees and mayor to please consider opting out. At this point we don’t have the necessary information. More research needs to be done.

Discussing projected revenues, Lisa Tomeny said, “In Colorado it’s $3 million per dispensary. It would generate $90,000 for the Village of Scarsdale.

Madelaine Eppenstein of 18 Autenreith Road said, “We have a lot of information and research. I applaud the DATF and the teenager who spoke tonight. There will be an impact – no doubt about it. We will change the complexion of Scarsdale in a way we might not be happy about.”

Dr. Darlene LeFrancois-Haber said, “I agree that legalization means normalization. Marijuana is good for neuropathic pain but recreational use is for people to get high. We don’t want to make it easier for our young people to get a hold of this. I vote to opt out for now.”

Following the discussion and a review of the proposed change to smoking code, the trustees voted to hold a public hearing on the cannabis law at the next meeting of the Village Board of Trustees on November 9, 2021.