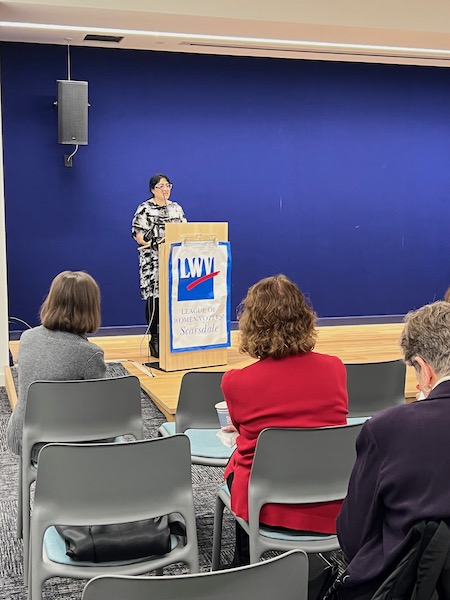 Discussing women’s. access to abortion since the Supreme Court overturned Roe vs. Wade, Attorney Rabia Muqaddam said, “What is happening on the ground is pretty catastrophic.: But, she said, “the arc of justice does bend, and will, in our direction." She vowed, “We are not giving up. There is reason for hope.”

Muqaddam, a Senior Staff Attorney at the Center for Reproductive Rights was invited by the League of Women Voters of Scarsdale to speak on “Abortion in America Post-Dobbs “ at the Scarsdale Library on Wednesday November 16, 2022. The event was well attended by a group of women who wanted to learn more about what was going on nationwide and what they could do to safeguard their rights.

Muqaddam is the lead counsel in challenges to the abortion bans and restrictions passed in Oklahoma and discussed work by the Center to challenge abortion limitations in Tennessee and Kentucky. The group is also working to defend women’s rights to travel across state lines to states that do permit abortion, to receive lifesaving healthcare in cases where pregnancies endanger lives and to receive medication to induce medical abortions.

Beyond abortion, Muqaddam believes that women have a right to personal body autonomy, to contraception, to have or not to have children and the right to maternal health care. She says, “if women don’t have the right to an abortion, they don’t have equality and are relegated to second class citizens. She said, “The right to abortion is essential for people’s dignity and their ability to take care of their existing families.”

About the Dobbs decision she said, “It is not clear why the court even took this case. It is highly unusual to take away a right.”

She continued, "In determining whether a right such as abortion is protected under the Fourteenth Amendment, Justice Alito says the only that matters is whether that right was deeply rooted in history and tradition. The practical effect of restricting that right, the harm that may cause, is not relevant. Furthermore, Alito articulates an extreme version of Constitutional originalism, in that only rights that were recognized in the late 1800's, at the time of the ratification of the Fourteenth Amendment, are protected. Despite Alito's footnote to the contrary, under his legal reasoning, the rights to birth control, same sex marriage, and racial intermarriage would not be protected."

About her work to safeguard women’s reproductive rights she said, “We are going to build it back up through the courts and through legislation. We are going to do everything we can to build back up the rights to abortion and true reproductive autonomy….We are going to win – the law is on our side. The law does not only recognize rights from the 1880’s. It is contrary to the way the law was understood for generations. Once the courts become more rationale they will decide on our side,” and she added, “Hopefully Congress will pass the women’s reproductive rights act.”

About the November election and Gen Z voters she said, “Every generation is more concerned about women’s health – we saw that in the election. They came out and voted. That’s why I am hopeful. They care and they are knowledgeable. I think these anti-choice pro-life people are facing their own extinction.”

What can you do to support women’s reproductive rights? Muqaddam advised the group to “Speak loudly and publicly and give money to funds fighting this ban. Talk about why abortion is essential. Sex education and contraception are important too – talk about these questions in a more open matter. That will move the needle. Abortion should not be shoved under the rug. It’s ethical and essential. If we all speak openly it will change minds.”