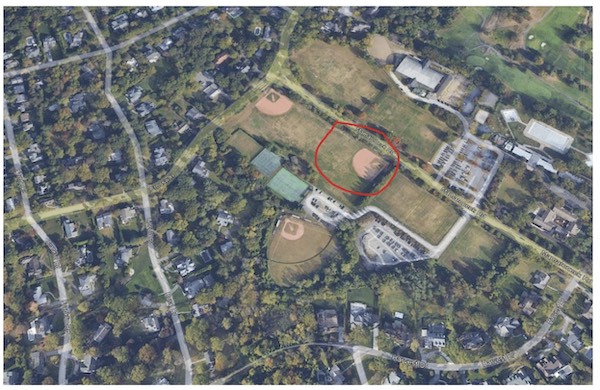 A committee from the Scarsdale Little League who is proposing to build and finance lights on one of the baseball diamonds at Crossway Field is now facing opposition from an ad hoc group of neighbors.

Led by Gerry Antell and Alan Garfunkel from Quaker Ridge, the group has gathered 96 signatures from Scarsdale residents on a petition opposing the installation of the lights. In addition to the petition, the group held a virtual zoom meeting on Monday night March 21. They said the overwhelming consensus of the group was opposition to the proposal.

At the meeting of the Village Board on Tuesday March 22, the Scarsdale Board of Trustees approved a resolution to refer the matter to the Planning Board for study and a recommendation. Both Antell and Garfunkel spoke at the Village Board meeting. Garfunkel relayed some history and said that in 2005 he was part of a negotiation with the Little League for construction of the baseball field at Crossway 3. Garfunkel said that the original agreement with the West Quaker Ridge Neighborhood Association for the construction of the field specified, “no lighting or sound systems of any kind, nor night games shall be permitted at any athletic facilities at Crossway Fields.” He said he presented the history to the Village Manager.

Garfunkel added, over the years, “Periodically there were applications for lights and they were rejected due to the previous agreement.”

Why does the group oppose the lights?

They say that the neighborhood is already overburdened with traffic, noise and sports activity on the lacrosse/football fields, tennis courts, baseball fields, Kids Base, Boulder Brook Equestrian Center, the pool and Saxon Woods Golf Course. The petition reads, “The proposal adversely impacts all of the surrounding neighbors with more traffic, noise, sports events, field maintenance, trash collection and police activity. “

They oppose what is estimated to be 88 nights per year of light usage and say that the proposed pole lights and car lights will be highly visible from at least 65 properties in the immediate area.” In addition, “ the proposal places 70 and 80 foot lighting poles on Mamaroneck Avenue which will be visible from our backyards and Mamaroneck Road. They say, “This will give the neighborhood a permanent undesirable, industrial appearance.

In a letter to the Board of Trustees dated March 21, 2022, Garfunkel outlined his objections along with documentation from 2005 of the original agreement with the Little League. He points out that the Little League proposal includes no provision for screening or landscaping to shield the neighborhood from the lights and says that the Village has not maintained the evergreens that were originally installed when the field was built.

According to Garfunkel, who lives on Lincoln Road and backs onto Crossway, the comfort station at Crossway is already a gathering point for young people at night and he contends that lighting the area would further exacerbate the problem. 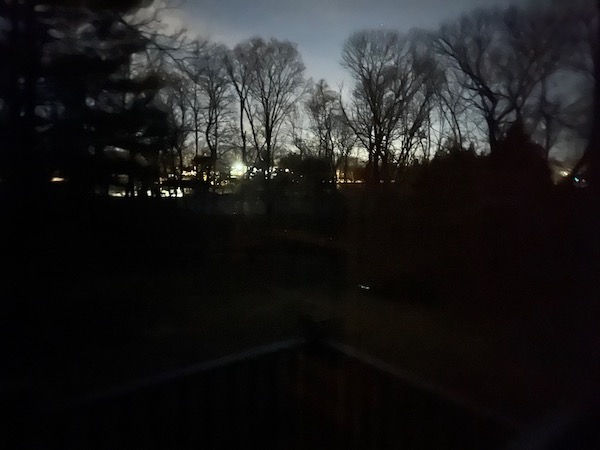 The view from Garfunkel's yard at night.

He contends that since Crossway was used as a dumping ground before it was converted to playing fields, the area is elevated 20 to 25 feet above his property line. If the lights were installed in the parking lot they would be 50 feet from his property line and 50 feet above it.

Concluding his comments at the Village Board meeting on Tuesday, Garfunkel threw in a curve ball saying, “Another committee has been set up about the pickle ball proposal,” referring to the Village plan to construct four or eight pickle ball courts at Crossway as well.

(Updated 3-24-22)
At the March 23, 2022 meeting of the Planning Board, the Board heard hours of testimony from those for an against the lights. Speaking for the proposal on behalf of the Scarsdale Little League were Steve Pass along with David Kulis from MUSCO Lights. MUSCO installed the lights at Butler Field and explained how they minimize light pollution. Both Pass and Kulis sought to answer objections about the lights, noise and traffic posed by neighbors.

Questions were posed from members of the Planning Board and Village Engineer Dave Goessl.

Residents who were for and against the lights called in on Zoom to express their views. Supporters emphasized the need for additional fields, the minimal impact of the lights at the high school, and the overall benefit of giving more children the opportunity to play. Neighbors expressed concerns about additional light pollution, noise from the field, safety concerns about balls flying into spectators, pedestrians and passing cars and kids tracking down foul balls in the streets.

Comments lasted until 11:45 pm, and then the Planning Board’s deliberations began.

The Village Board of Trustees had charged them with reviewing the following questions. They were not asked to make a recommendation. Their responses are expected this week.

Here are the questions on which they will comment:

1) the location of all proposed lights to be installed;
2) details related to the type of lights proposed;
3) the direction of light and potential spillage;
4) the potential impacts on adjacent land uses, including but not limited to potential increase in noise and traffic created by athletic events, including practices and contests conducted after sundown; and
5) all other information and considerations deemed appropriate by the Planning Board in their review of the proposed installation.

The Scarsdale Little League sent us this comment following the meeting of the Planning Board: "We are pleased with how the planning board meeting went last night regarding our proposal to install lights on the Crossway 1 baseball field. The committee members asked excellent questions and we were encouraged that they seem receptive to our proposal. We are fortunate to have broad community support that is growing by the day as more residents hear about this exciting project. In fact, many residents spoke at the meeting to express their support for the project and how it will positively impact the wider Scarsdale community. We are sensitive to the needs and concerns of our Crossway neighbors and look forward to working productively with them and the Village as the proposal process moves forward. Our proposed gift to the Village will increase access to fields, help to enhance the town’s athletic facilities and create more opportunities for hundreds of Scarsdale children, of all ages, to enjoy our fields and public spaces."