Should This Mansion Be Saved? 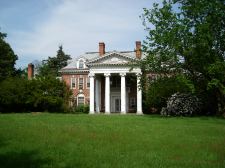 The original house of the Marx estate still stands on Gatehouse Road.   Though empty and neglected, its grandeur is breathtaking. The red brick, white-pillared mansion was built in 1904 and has nine fireplaces and 14 baths. It had a swimming pool, tennis court, paddle court and a four-car garage with a seven-room caretaker's cottage above it. A chain linkfence, to prevent Marx’s 13 dogs from straying, enclosed the entire compound.  Before the subdivision of the property in the 1980's,  the home had a Weaver Street address and could be viewed through the open lawn from the street.  Now, surrounded by 29 contemporary homes on uniform lots, the home is hidden from view and appears to be a vestige of a gone by era.

The property was owned by the legendary Louis Marx, sometimes called ''the Toy King of America,'' who died in 1982 at the age of 85.  He had nine children, who he named after famous friends who were named as godparents to the children: Emmett Dwight, for Gen. Emmett O'Donnell and President Eisenhower; Spencer Bedell, for Gen. Walter Bedell Smith; Bradley Marshall, for Gen. Omar N. Bradley and Gen. George C. Marshall; Curtis Gruenther, for Gen. Curtis E. LeMay and Gen. Albert M. Gruenther, and Hunter Bernhard, for Gen. Hunter Harris and Prince Bernhard of the Netherlands.

Marx is as legendary as his estate.  A 1955 article in Time Magazine describes his arrival at a soiree at the 21 Club in Manhattan; “A roly-poly, melon-bald little man with the berry-bright eyes and beneficent smile of St. Nick touching down on a familiar rooftop.  Louis Marx, America's toy king and cafe-society Santa, was arriving at his favorite workshop. With his beautiful blonde wife Idella, who looks the way sleigh bells sound, 59-year-old Lou Marx toddled regally toward a table in the center of the downstairs room. The table is always reserved for Millionaire Marx by the divine right of toy kings, and the fact that he has never been known to let anyone else pay the check. “

And city friends were not the only ones to benefit from his generosity. Each Halloween from 1940 to 1980, Marx distributed hundreds of toys to neighborhood children who came to trick or treat. He built a multi-million dollar toy company and was free handed with his gifts.

Upon Marx’s death, Anthony Scarcella, a New Rochelle developer, bought the estate and received approval to subdivide it and build 29 homes.  He built the development and in 1985 he sold the original home on 1.75 acres to Alexander Raydon, who kept it until October 2007.  When Raydon died, Scarcella re-purchased the house, for $2,500,000, which was more than the sale price of the entire estate in 1982. Scarcella then attempted to gain approval to tear it down and build three more new homes on the property. However, this time he received far more resisitance from the Board of Architectural Review and ultimately the Scarsdale Board of Trustees.  He was denied a demolition permit to tear down the home because it was found to be a structure of substantial historic importance.  The BAR found that the mansion met three of the four preservation criteria and that its demolition would be detrimental to the public interest.


The Board of Architectural Review concluded:

1.    That the Marx mansion, built in 1903, is of such architectural and historic interest that its removal would be detrimental to the public interest in that the structure is a Georgian Style building incorporating a symmetrical brick façade with a low roof line with white trim doors, windows and eaves. The record also supports the existence of a Greek Revival style pediment with Corinthian columns in the front and rear elevations and that the trim details conform to the period in which the Marx mansion was built.

2. That the Marx mansion is an example of the Beaux Arts School of Design with high quality of craftsmanship, which was the prevalent design in Scarsdale at the turn of the twentieth century, but is rarely found today.

3. That the Marx mansion is of such old and unusual uncommon design, texture or materials that it could not be reproduced or could be reproduced only with great difficulty.

4. That the Marx Mansion was designed and built over 100 years ago using materials and methods common during that era, and the Greek Revival style stone pediment and the Corinthian stone columns would be almost impossible to duplicate due to cost of materials, transportation and labor.

5. That the quality of craftsmanship used in the construction of the Marx mansion and the level of architectural detail could not be reproduced today except at an exorbitant cost. Additionally, to reproduce a building with this level of detail and size would require an insurmountable amount of resources. Buildings this size and quality are typically built on large tracts of land and in enclaves that are now uncommon in Scarsdale.

Scarcella continued his fight and filed a hardship application in early 2008, which was also denied.  The Board of Trustees felt that Scarcella was well aware that he did not have approval to demolish the mansion when he repurchased the property in 2007.

Scarcella was denied approval to demolish the home and filed a lawsuit against the Village of Scarsdale to try to reverse the determination of the Scarsdale Board of Trustees. The case was heard at the Westchester County Courthouse in White Plains on Tuesday.

Andy Bass, who attended the June 2 oral arguments, sent out an email with the following update:

Judge Rory J. Bellantoni of the New York State Supreme Court, 9th Judicial District, announced yesterday that he will render his decision in the Marx mansion case this Friday, June 5, at 2 p.m. in Room 301 of the Westchester County Courthouse in White Plains.  Bellantoni made the announcement at the conclusion of yesterday's oral arguments in the case, officially known as SCARCELLA, ANTHONY vs. VILLAGE OF SCARSDALE BOARD.

Based on the judge's comments and line of questioning at yesterday's hearing, it appears he is likely to rule in favor of the Village in the case.  Bellontoni opined that there "seems there was due process here."  The judge did not sympathize with the hardship argument put forth by Scarcella's attorney.  Bellantoni stated that Scarcella bought the mansion knowing:

"He knew all these things when he bought the property," Bellontoni commented.  "He rolled the dice and it didn't work."