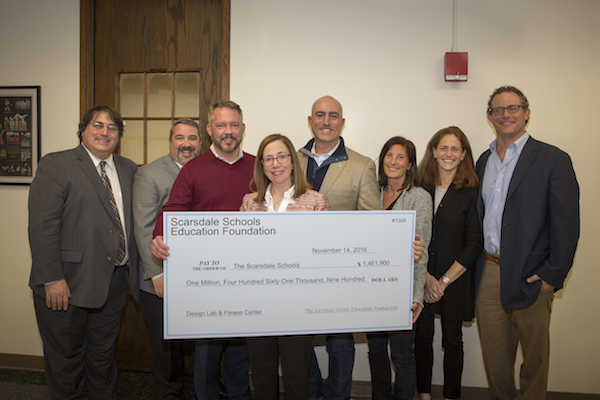 Voters approved an $18.2 mm bond in December 14 to update, repurpose and expand district schools, and it has taken almost two years to secure the funds and bids to make this work a reality.

Two years ago, the newly formed Scarsdale Schools Education Foundation pledged to raise funds to build a design lab and a fitness center at the high school, and at Monday's meeting they presented the first installment of that gift. The foundation provided the district with $1,461,900 in funds and a promissory note of $791,484 to cover the cost of these two construction projects. The funds from the note will be delivered in three installments of $263,828 each on June 30, 2017, December 31, 2017 and June 30, 2018. The board of the foundation says that most of these funds have already been pledged and they feel confident that they will be able to deliver the monies as promised. In order to begin work on these two projects at the high school, the school board needed the funds or a promissory note in hand. The school district had set aside and additional $500,000 for the fitness center in a prior budget and the Madoff family will contribute the fitness center equipment.

Construction on these two projects is expected to begin shortly, with completion planned before the opening of school next year.

Announcing the gift, Foundation President Mark Bezos said, "This is a very proud evening for the Scarsdale Schools Education Foundation. We are pleased to be presenting our check for $1.46 million as the first installment of our support for the construction of a new Design Lab and Fitness Center at Scarsdale High School. We are excited about the educational value of these projects and the positive impact they will soon have on our high school program. We are very impressed by the curricula and other preparations the administration has made for their opening by the start of the new school year. We are especially thrilled by the rising expectations among hundreds of students who are excited about what the D-Lab and Fitness Center will offer – and we are happy to imagine the impact on younger students, still now in elementary school, who will benefit in ways they cannot yet imagine. We are also making a commitment tonight to the Board of Education to pay the remaining costs of construction, fees and equipment – with an additional $800,000 over the next 18 months. With the energy and enthusiasm these projects are generating, and with hundreds of Scarsdale families already on board, we are confident about making this commitment so as not to delay the delivery of these projects to the teachers and students who will benefit. This has been a very intense effort over the past two years – building on the work of our founding members who launched this foundation nearly six years ago. Many of those founders are now empty-nesters, but we are building on what they launched in 2010 in response to the Board of Education's request to find new sources of funding to ensure that our schools remain on the cutting edge of public education nationwide."

Assistant Superintendent Stuart Mattey recommended that the Board move forward with the work as he believes the construction bids are as low as they will ever be, and that if the Board delayed the cost of these projects would go up. In a discussion about accepting the gift, the majority of the board favored it, understanding the promissory note did pose a potential risk. Board member Art Rublin had reservations about the promissory note, saying, "I am not comfortable accepting the cash and the promissory note. The proposal does not provide sufficient comfort. I hope they will produce the funds on the schedule, but we need absolute certainty. Collecting on pledges is by no means easy. Charitable giving may be affected by the election. We need the cash in hand."

Ultimately the board voted 6-1 to accept the gift.

Mattey then reviewed the bids for the balance of the work which includes:

A district-wide technology update and a new roof for Quaker Ridge had also been authorized in the bond but they were completed this year using surplus funds from 2015/16 budget. Work on the high school auditorium and the middle school music room will be done using the capitol improvements funds in the 2016/17 school budget.

Even with the exclusion of these two projects, the bids came in 13% higher than estimated but the Board believes they can use the fund balance to pay the difference.

The administration recommended that the board approve these bids as this was the second round of bidding and the prices were considerable more favorable than first round which came in 30% above estimates and were rejected. Mattey said the district reached out to contractors in our area as well as Long Island, Putnam and Duchess Counties, did value engineering and packaged the projects together. He said that waiting would result in increased costs.

The Board approved the bids unanimously. Work will begin at the high school soon and at the elementary schools in the summer so that students will be out of the school for the beginning of the construction. See more about the construction bids here.