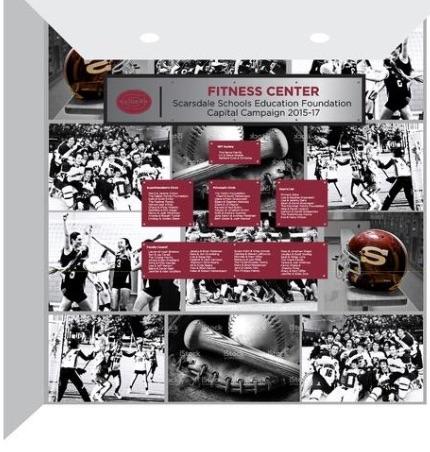 Last week, the Scarsdale Board of Education (BOE) approved preliminary designs for donor recognition signage for the Scarsdale High School Fitness Center and Design Lab, acknowledging the contributions of the Scarsdale Schools Education Foundation (SSEF), which raises funds for projects not covered by the district’s budget.

As part of its original memo of understanding (MOU) with SSEF, the board of education agreed to support an appropriate means of recognizing donors to the projects, and to designate the space itself. (See the BOE’s online “Agenda Item Details” for the signage letter and accompanying designs.) While it is somewhat unusual to see such an acknowledgement in district facilities, BOE Policy 7500 gives the board discretion over facility naming (or acknowledgement) rights.

Steve Seward, SSEF executive director, said, “Our extensive discussions about donor recognition with the Board of Education took place through several months in 2014. First, with Bill Natbony, our liaison at the time, and then with the Board of Education as a whole in their public meetings that fall, leading to the signing by the two presidents at the time, Lee Maude for the BOE and Ellen Miller-Wachtel for us.” He went on, “We also worked closely with the district in 2016 to plan the courtyard design that would include a walkway with pavers to recognize contributors.”

Scarsdale School Board President Bill Natbony stated, “The MOU… between the foundation and the board does include a provision under which the board agreed to support an appropriate means of recognizing donors to the projects… within the board’s sole discretion and with the details of that recognition to be determined through mutual discussion.” He continued, “The MOU was discussed extensively and approved by the board at public meetings several years ago.”

The current designs are the result of collaboration between the foundation and district administration, coordinated by Pam Rubin, SSEF secretary. According to Natbony, both groups had discussions over the past year about the design, size and content of the plaques in the two spaces. Then, he said, “At several board meetings during the past year, updates were provided to the public that discussions between the administration and foundation were ongoing, and… it was anticipated that a proposal would reach the board for consideration as soon as possible.” He continued, “The public had opportunities to comment on what an appropriate method of recognition might be at several times -- at the time the MOU and the recognition provision was discussed, in response to periodic updates at our board meetings by the board’s foundation liaison or others, and at our meeting on March 19.”

According to Scarsdale Schools Superintendent Thomas Hagerman, “Pam Rubin has done a really terrific job of interfacing with lots of folks and making sure that it was the right fit, the right design for the spaces, that it really reflected (its) purposes… When we first talked about this work, we talked about having an integrated design… that would really match in a seamless sort of way.”

Rubin stated, “A very large group (of donors) stepped up to support these really incredible projects… We are so thrilled at the kind of education that will take place in those spaces. And, as far as the signage goes, we wanted to make sure that (it) did justice to what was happening in those spaces.”

The signage for the fitness center and design lab will include the names of 65 donors, each of whom made a contribution of at least $10,000. Seward mentioned, “We also plan a small plaque within the design lab for 10 donors whose gifts of $5,000 are allocated to support equipment. And, of course, the fitness center will include a suitable tribute to Tyler Madoff, whose family's gift made possible the purchase of equipment there (unrelated to SSEF).” In addition, the foundation has sold over 400 courtyard pavers at $250 and $1,000.
The $38,000 estimated cost for the signage will be deducted from the final SSEF payment due to the school district, as the district is not permitted to purchase donor plaques or signs. Board Member Art Rublin expressed concern that the district may need the $38,000 for other expenses… “I’m struggling with the idea that there may be shortfall… At the same time, I think it’s important to recognize the donors… What are the chances we won’t need that $38,000? We’re hearing that there’s going to be $38,000 less than there was going to be before. If we don’t need that money it’s a different story...”

Hagerman explained, “This wasn’t fleshed out at the beginning of this process as well as it should have been but, of that $38,000, $25,000 of it… was for the actual donor plaques, and we knew we couldn’t pay for those… because that is a gift of public funds. So that was a gap that was built in.” Of the remaining $13,000, approximately $5,000 would be for installation and related costs, and $8,000 for additional design expenses to insure the signage is an aesthetic match to the space.

To clarify, while the board did approve the preliminary design plans last week, there was no approval for a $38,000 payment by the district. According to Natbony, the cost issues are still under discussion.

In addition to the question raised by Rublin is whether the district will make a formal practice of recognizing donors who contribute to future projects and/or facilities. Natbony explained, “I suppose any action taken by any board at any particular time could arguably constitute ‘precedent,’ but this circumstance arises from a particular MOU, from particular projects and from an unprecedented fundraising effort by the foundation. Moreover, the actions of this board cannot bind future boards and does not constitute formal adoption of a board policy.” He went on, “My understanding is that donor recognition plaques (though on a smaller scale) have previously been used with respect to other donations (benches are one example).”

Seward concurs, “(There is) no precedent. And, we do not currently have any plans for capital projects of this kind.” He volunteered, “We are now looking to launch a program of grants in support of innovative education programming at all seven schools in the district, on the model of the initial grants we awarded in 2013, before the capital campaign.”

However, while recognizing the great generosity of SSEF and not seeking to minimize its contribution to the high school, some question the appropriateness of listing names of individual donors. Amy Cooper, who was the President of the SHS PTA when the foundation was established and the parent representative on the high school building committees for the 2014 bond projects, is among them. She said, “During my tenure as the parent rep on the high school facilities committee and as the Scarsdale High School PTA President in 2014, I attended many of the Board of Education meetings pertaining to the 2014 Bond. I do not recall any public discussion about whether individual names should be posted on a plaque outside the fitness center or design lab. I reviewed all my notes pertaining to the 2014 Bond and cannot find any reference to Board discussion and approval of listing individual donor names on these facilities. I believe there are many unanswered questions on this topic. Full community involvement and discussion as to whether Scarsdale Public Schools should permit individual donor names to be posted on plaques on school facilities is warranted, especially since listing individual donor names on plaques inside our schools is not the usually protocol in Scarsdale.

Natbony’s response is that issues raised “Do not really concern ‘naming rights’ because the design lab and fitness center are not being named after anyone.”