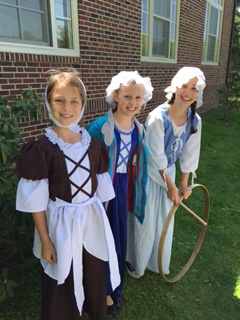 (Updated April 29, 2022) One Scarsdale tradition has fallen victim to political correctness. A long-standing annual event at Scarsdale’s elementary schools was the fourth grade Colonial Fair. These fairs celebrated life in the Colonial era. Students dressed in Colonial era costumes and participated in games and dances and activities like churning butter and spinning wool. These fairs supported the study of Colonial times, which is a part of the fourth grade curriculum, and also allowed children, parents and teachers to enjoy an activity which recreates life in the era that Scarsdale was founded.

However, this year, parents were told that the fairs were finished, and informed that the colonial era would be studied in the classroom, without parent or PTA involvement.

“This Friday, April 29th, the fourth-grade teachers will lead the students in the final activities related to our Colonial America unit. This day will be different from previous years in that the students will not be wearing costumes, and there will be no food.

However, many activities will be the same, and some new ones have been added. The students have been preparing for the day by researching daily life, map making, diary writing, tea staining, making quill pens, and tinsmithing (completed in art class). On Friday, the students will continue with additional hands-on experiential learning activities like: 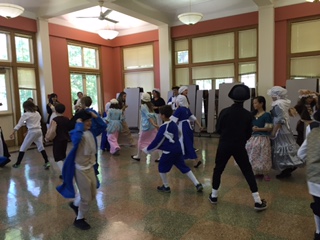 The students will have choices in activities and may complete some or all of the above. As a team, we feel that this year's approach has been aligned with district goals and has allowed us to go deeper with the content and experiences. We are looking forward to this culminating event and are excited to share photos from the day with you.

Commenting on the news, Edgewood mom Moira Crouch Bandsma said, "The Edgewood Colonial Fair Committee was told in January that the event was happening this year. Four months of emails went between the Committee and the teachers and the Edgewood administration. Some were confusing but the gist was that everyone was excited, the event was being redesigned by the teachers with DEI in mind and they look forward to the support of the PTA and parent volunteers, and would get back to us. Monday, the PTA president emailed that teachers were working on the event, using their curriculum expertise to adjust it with DEI in mind and get back to us in 1-2 weeks. My concern that the year was getting close to the end and we need a date was responded to by a phone call from Principal Brown informing us that the Colonial Fair has been canceled for a while because colonialism should not be celebrated and that the colonial era would only be taught in the classroom because it is required by NY State law. Then the email was sent out from teachers the next day providing 2-days notice of what activities are being done in the classroom as part of colonial era curriculum and that they would take pictures for the parents.

The Colonial Day Fair committee was really shocked. We were sad and frustrated that our children would be deprived of yet another wonderful fun tradition at Edgewood after missing out on so much during the last two years.

We were really disappointed that a clear transparent communication had not come from the principal or district even though the decision had been made a while ago."

Scarsdale10583 inquired about the change in the curriculum and received this notice from Assistant Superintendent Edgar McIntosh:

"Scarsdale prioritizes purposeful and meaningful learning for students, while striving to be inclusive and sensitive to our diverse learners. It is also important to know that we are in a continuous process of reflecting on and editing our curriculum, this includes the trips, projects, and grade-wide activities. In our social studies learning units, we place high value on historical accuracy, critical thinking and cultural sensitivity.

Colonial studies is a part of the fourth grade curriculum, and one that has undergone changes throughout the years. The focus on costumes and food centered on one historical perspective, while excluding the experiences of others. Schools began phasing out the costumed activity portions of Colonial study, while continuing to engage in a robust and enriching curriculum about Colonial America. These decisions were made over a period of time on the individual school level, largely prior to the pandemic. Students still enjoy a variety of fun, age appropriate, and hands-on activities.

While Edgewood School was the most recent of our elementary schools to eliminate the costumed portion of the day’s events (while adding others), the purposeful and meaningful learning about this time period continues across the District." 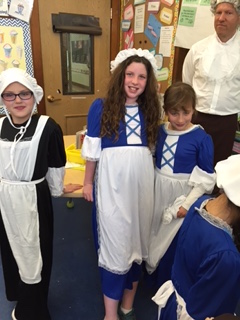 The news spurred much discussion among parents about whether or not the event should have been cancelled. Edgewood parent Frank Murtha said, “There are ways to do this inclusively. We need to talk to one another.”

Commenting on social media, some parents asked why colonization should not be studied, saying that it is a part of US history and the history of so many countries around the world. One parent wrote, “History is the sum of it all: the joyous and the sad and the horrific and the great. It is understanding that yes, a conqueror came through, and killed people, and captured slaves - but there were celebrations, and religions and food and culture, too. There were victors who were happy just as there were victims who were not. We are the sum of it all. Not just the parts that people want to tell.”

Other parents noted that there are fewer and fewer events in which parents are invited into the schools to participate. They felt that cancelling these popular fairs was just another way of closing the doors of the schools to parents and the community.

Still others felt that the day showcased the history of Scarsdale and the U.S. and recommended adding more diverse elements of this era to reflect the total picture rather than cancelling it. Sadly most who commented were just sorry that this joyous tradition was stopped, without any input from or notice to the community. As parents and students they remembered the day fondly and looked forward to sharing this tradition with future generations in Scarsdale. 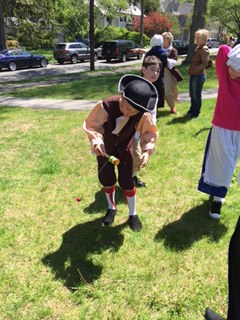