Yusuf and Schulhof Elected to Lead 2022-23 Scarsdale School Board 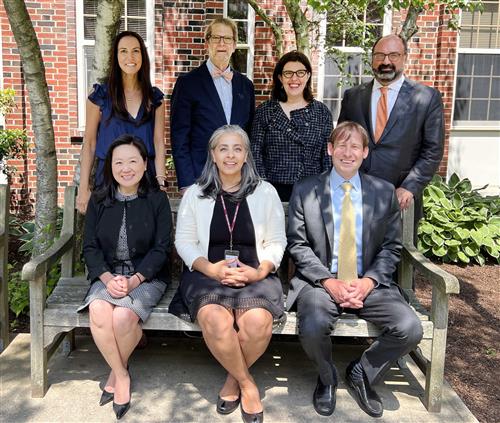 After a tumultuous school year marked by tax trouble with the IRS and the resignation of the Superintendent of Schools, the Board of Education closed the books on the 2021-2022 school calendar and greeted the next year by welcoming two new board members and electing new leadership at their reorganization meeting on Friday July 1, 2022. 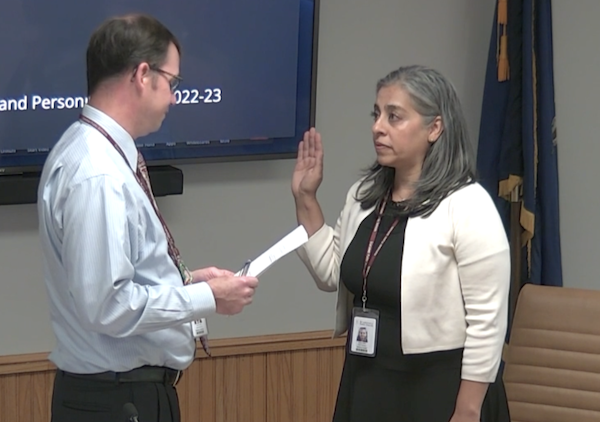 Andrew Patrick swore in Amber Yusuf as President of the Board of EducationNewly elected Board members Colleen Brown and Suzie Hahn Pascutti and were sworn in, replacing departing Board President Karen Ceske and Board Member Carl Finger. Returning for a second three-year term is Ron Schulhof. Just minutes after the meeting opened at 9 am, former Board Vice President Amber Yusuf was nominated for and unanimously elected to serve as School Board President and Ron Schulhof was nominated and elected unanimously to serve as School Board Vice President.

Yusuf had worked in concert with last year’s Board President Karen Ceske and was poised to assume leadership. Her calm demeanor, respectful approach and willingness to listen served her colleagues and the community well through one of the most stressful periods in the history of the Scarsdale Schools. At the July 1 meeting she appeared confident, happy and willing to do the hard work of the Board. 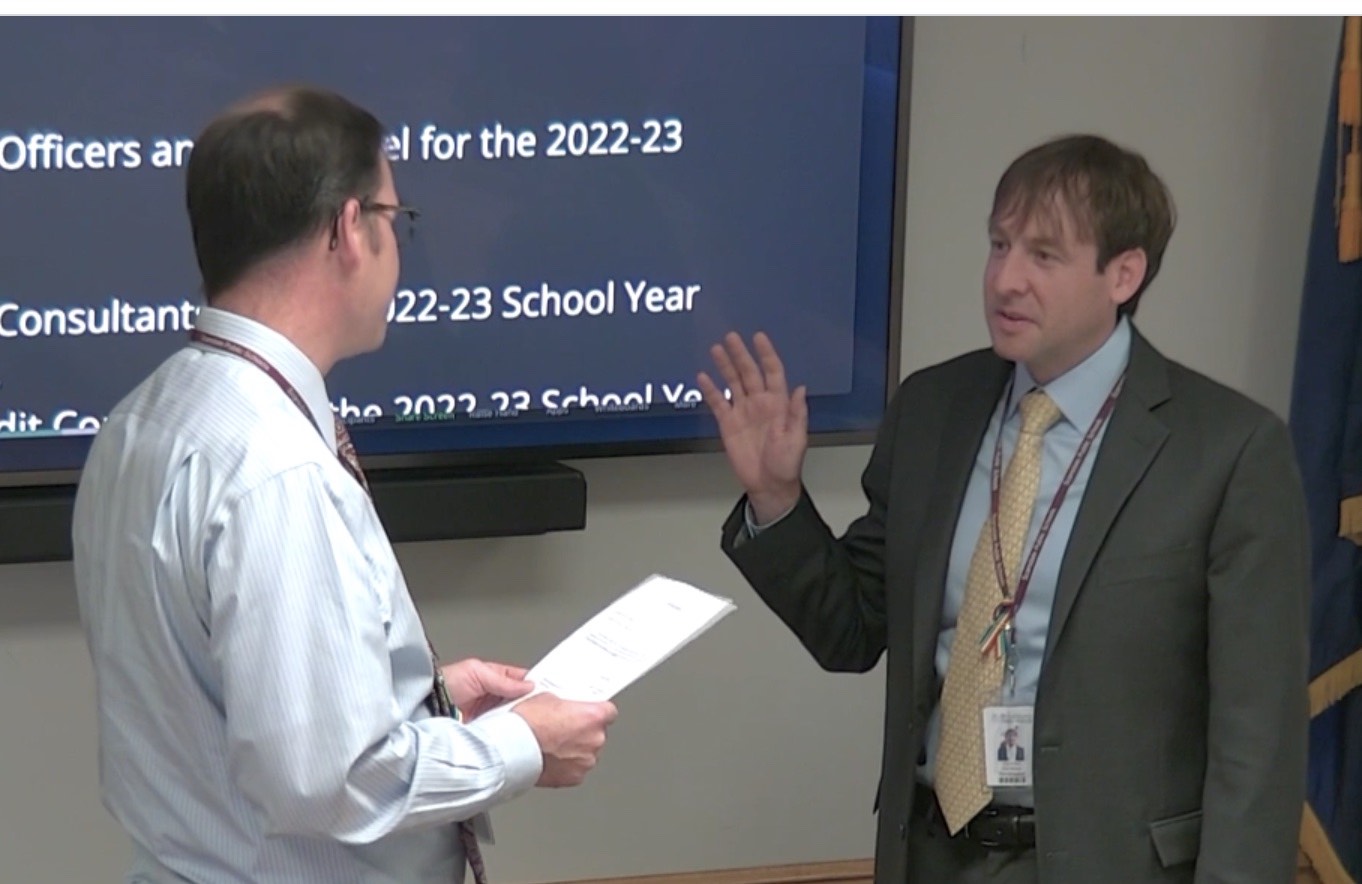 Ron Schulhof took the oath to serve as Board Vice Presidentspend on Board business. Schulhof began his first three-year term asking questions and challenge protocols, procedures and decisions. He was often more open and willing to speak out than his board colleagues at a time when some in the community felt silenced and intimidated. He brings a legacy of transparency and honesty to the job.

Even when taking some very routine actions to begin the next term, the Board appeared acutely aware of the need to exercise oversight and improve transparency and accountability.

Interim Superintendent Andrew Patrick announced that Board policies would now be visible to the public via Board Docs.

Jim Dugan said, “I am not so sure I am comfortable with it. We are the elected representatives but we are parents and community members first. We have a view of what the community considers important to know – and employees may not have that insight.”

Jessica Resnick-Ault said, “I want to be sure we are fully exercising our oversight. I think it is important that we know about requests that are not being fulfilled.”

New board member Colleen Brown said, “If Drew takes this over how will we stay abreast of the requests?

Ron Schulhof said, “I think the discretion should lie with an elected body. Review by the board adds credibility to the response and may help to avoid an Article 78.”

Suzie Pascutti agreed, saying, “It could be important that these appeals are reviewed by the Board.

Bob Klein concurred saying, “I agree with the comments and would like to keep this with the Board.”

The Board then voted to leave the Board as the FOIL Appeal Officer.

Some remained focused on the troubles of the prior term. During public comments, Robert Berg from 17 Birch Lane called in to discuss the investigator’s report which was posted on the district website that week.

"I read the ersatz 3-page investigative report of Anthony Brock on the District’s IRS scandal issued this week with disgust – but no surprise. This Board of Education is no January 6th Committee – that’s for sure. Rather, your lack of transparency reminds me far more of Congressional Minority Leader Kevin McCarthy’s public response to the January 6th Insurrection.

Mr. Brock failed to take any statements of the key witnesses under oath. That fundamental weakness is magnified when the key player, Dr. Hagerman, provides a timeline of when he purportedly learned of the IRS matter that is many months later than when Jeff Martin and Stuart Mattey state Dr. Hagerman was told. Mr. Brock apparently never bothered to try confront Dr. Hagerman with these inconsistencies, and had Dr. Hagerman been under oath, and subject to a meaningful cross-examination, perhaps a more credible time line would have emerged as to his knowledge.

Even more importantly, Mr. Brock seems never to have questioned the District’s attorneys at the law firm of Bond Schoeneck & King about that firm’s time line of knowledge of the IRS matter. I’ve said from the outset of this scandal, at the very first Board of Ed meeting after the public was told about the lien, “Where were the District’s lawyers and outside accountants? They had to have been involved when the District was negotiating with the IRS?”

Did that thought ever cross Mr. Brock’s mind? I’m sure it did, but he’s protecting Bond Schoeneck & King here. And that’s seriously wrong.

We know that in mid-September 2021 (around September 14), Mr. Martin and Mr. Mattey spoke with the District’s regular outside attorneys, Daniel Petigrow of the Thomas Drohem firm and Craig Olivo of the Bond Schoeneck firm, told them about the IRS problem, and asked them for a referral for an IRS lawyer. The lawyers recommended Bond Schoeneck’s own Frank Mayer.

At this point, competent outside counsel for a public school district have a duty to ensure that their client, the School District, including the Board of Education, is aware of the IRS problem. The NYS Rules of Professional Responsibility require attorneys representing an organization such as a public school board of education to ensure that the leaders of that organization – in this case, at the very least, the officers of the Board of Education – are fully aware of the important legal issues facing the District. In mid- September 2021, Bond Schoeneck and Thomas Drohem should have made sure the Board knew about the IRS problem.

But what’s worse, on November 8, 2021, the District, through Mr. Mattey, specially retained Frank Mayer of Bond Schoeneck to represent the District in the IRS matter and to file papers and an appeal of the IRS lien and penalties and interest with the IRS. And Bond Schoeneck actually filed that appeal on November 19, 2021. Bond Schoeneck started merrily billing away on that project. We are led to believe that no attorney at Bond Schoeneck bothered to speak with any Board member about this matter until after the end of March 2022. That’s INSANE. That’s plainly a violation of the attorneys’ professional responsibilities. That’s legal malpractice.

Meanwhile, presumably Bond Schoeneck is sending bills for its legal services promptly, and this Board, through its audit committee, is approving payment of these bills. The Audit Committee consists of all Board members. And the Bond Schoeneck bills presumably are itemized and describe the legal services as services regarding the IRS lien and appeal. So who’s approving these bills on behalf of the Board? And how can the Board say they’re in the dark?

Finally, while the Board is whitewashing its serious deficiencies as overseers of the District’s finances and operations by saying “It wasn’t me.” We weren’t told.” The Board is happy to throw poor Jeff Martin under the bus.

Jeff Martin is a hard working, tireless, loyal man who devoted 26 years to the Scarsdale School system. Here, there was a screw up under his watch. We now know it was a data entry error where a zero was dropped which led to a cascade of horribles, owing largely to the bureaucratic ineptitude of the IRS during the COVID crisis.

When Jeff figured out there was a problem, he did what someone in his position as Treasurer is supposed to do. He reported it to his boss, Stuart Mattey. He says he also reported it to Dr. Hagerman. Jeff did not have a reporting responsibility to the Board of Education. Stuart Mattey does. Dr. Hagerman did. Neither apparently reported the matter to the Board as they should have.

Mr. Mattey has been disciplined for this, as he should be. Dr. Hagerman skated off to an even more remunerative job in Chicago with a free ride and a waiver of any claims against him.

Mayra Kirkendall Rodriguez wished, “Good luck to the new board and to the new members.” She said, “I am concerned about the impact of the debacle on Scarsdale taxpayers. An extra auditor, lawyers, investigation…. His report was barely a report Were former board members interviewed? This was not a report, it was a timeline. I repeat. Any auditor and lawyer who knew about this before should not be involved in the district anymore. Please give the district more details on the DEI consultant – what are they delivering? I highly recommend that an experienced auditor join the board’s audit committee. We have plenty of people in the community who work in this field. You should be receiving detailed reports on how our money is being spent on a monthly basis. I am concerned that the business office is in charge of receiving foils because some involve the busines office itself.” 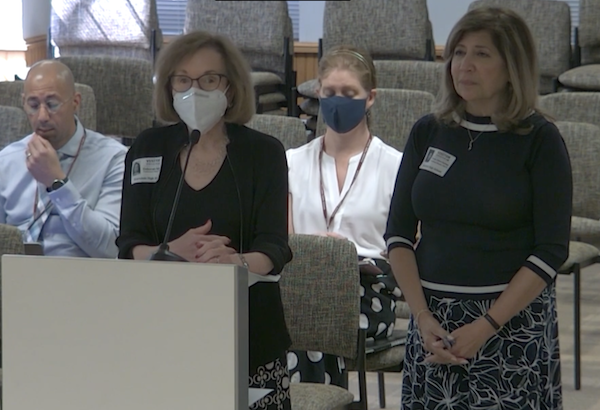 Deborah Raizes and Susan Guiney of HYAIn June, the Board announced that they had retained search firm Hazard, Young, Attea and Associates (HYA) to conduct the search for the next superintendent of the Scarsdale Schools for a fee of $23,500. Former Scarsdale Board of Education member Deborah Raizes and her colleague Dr. Susan Guiney of HYA attended the meeting to introduce their firm and provide an overview of their processes and plans.

Deborah Raizes said she joined HYA 25 years ago, and the “Vast majority of searches we do are for high performing suburban districts.” She said what distinguishes the firm is the breadth of their network of consultants. She said, “There are 100 consultants in our network who can call for reference checks.”

About herself, she said, “I am a former member of the Scarsdale School Board where I served from 1991-1997. “She added, “This room does look different, but not a lot!”

Her colleague Dr. Susan Guiney explained that she has been at HYA for two years. She was formerly the Superintendent of the Mt. Pleasant Schools where she served for ten years and has had a long career in education as a teacher, Director of Curriculum, and Director of Technology.” She said, “I decided to retire just prior to COVID and I have empathy for colleagues who are leading districts during challenging times.” She added, “I am very excited to lead this charge.” 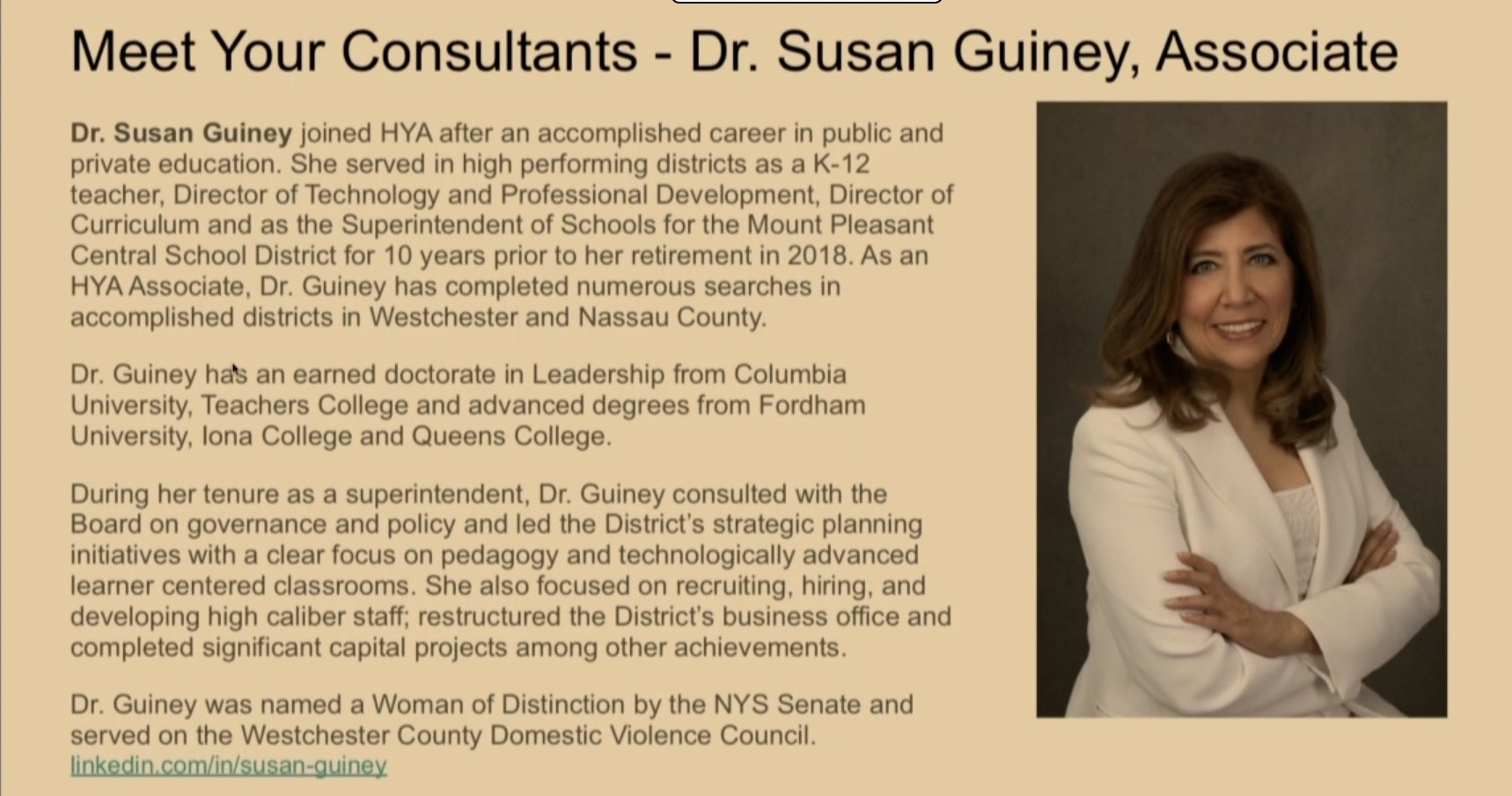 Dr. Guiney has an impressive resume in the field of education.

About their process Raizes said, “We will begin our work this summer. We will meet with the board to set our calendar and get input from BOE members to get their take on what is going on in the district. We will set up meetings with members of the community in the summer and September including individuals and school groups. We will host an anonymous online survey in September and everyone will have an opportunity to make sure that their voice is heard. Inclusivity is a major component of the search. In October we will hold a meeting to summarize what we learned from the meetings and the survey.”

“We believe in community involvement and making sure that all voices are heard. We appreciate the opportunity to doing the search. We will be aggressive about the search and find people who do great jobs in their districts now. It is a privilege and an honor to do the search and we will work hard to get you a great slate of candidates.”