You Asked: Questions About the Duck Pond, the Heathcote Bridge and Tree Removal 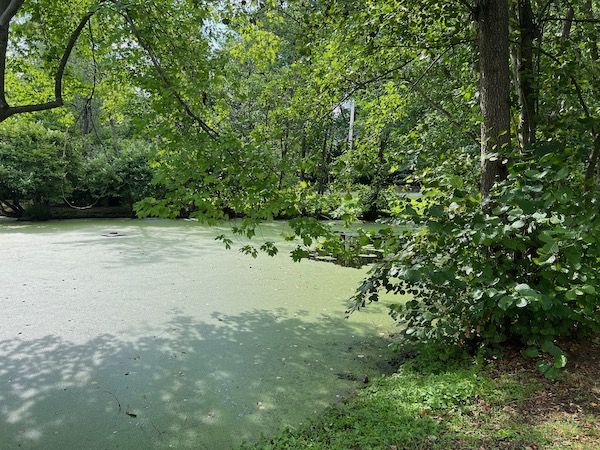 The pond on Duck Pond Road is covered in algae. Who is responsible for the maintenance of the pond?We received a letter in the mail from an anonymous reader who identified themself as “an outraged Scarsdale resident.” The letter was dated July 20 and was a copy of one addressed to Jeff Coleman at the Department of Public Works in Scarsdale, highlighting several issues around town.

It turns out that only some of the issues identified were in Jeff’s domain.

Here were the outraged person’s complaints – and here is what we learned: 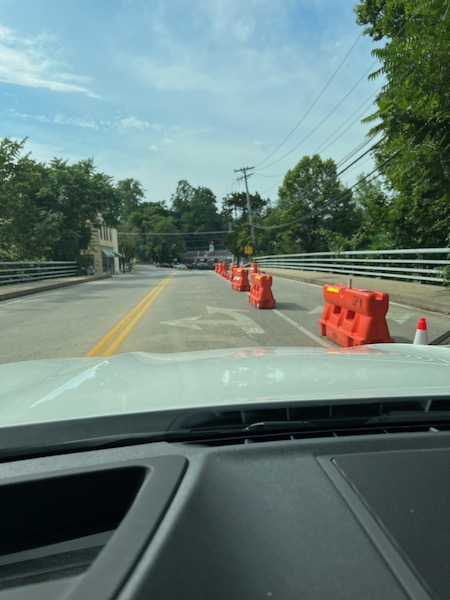 One lane of the Heathcote Bridge is closed to traffic.

First the Heathcote Bridge: The outraged resident complained that for the last three weeks the right lane of the Heathcote Bridge over the bypass has been closed. The person writes, “3 weeks ago you announced work would start on the Heathcote Road bridge over the BY-PASS. For 3 weeks the right lane has been barricaded causing all kinds of traffic jams as cars and trucks squeeze into 1 lane to get into the 5 corners. It is outrageous that in the past 3 weeks NO work has ever started on the road though you made a big announcement of the project. Nothing has been done except cause a traffic jam and inconvenience residents. Remove these barricades since you obviously are doing nothing to the roadway.”

We reached out to Jeff Coleman at the Department of Public Works and here is what he shared about the bridge:

About the lane closure:

“We expect that construction will begin in the fall and extend through the summer of 2023. Most of the work will occur below the bridge.”

Algae in the Duck Pond

The resident was also outraged about the pond, writing, “The famous pond on Duck Pond Road should now be renamed the DUCK SWAMP. It is completely overgrown with green algae, stinks from the smell and the reason is outrageous. For a dozen years 2 beautiful fountains that were illuminated at night to keep the water oxygenating and moving the water and we NEVER ever had these horrible conditions before. Light up and turn on the fountains.”

We stopped by and indeed found the pond covered with a slick of algae and saw that the fountains were not running. We asked Coleman why not, and he told us that the pond is owned by the Heathcote Association. He said, “The property owner, The Heathcote Association, maintains that property. I assume that they pay for the utilities as well. The Village does not.”

Scarsdale10583 reached out to the Heathcote Associationn for a response, and here is what we learned from Matthew Schwartz, the new president of the association.

Matthew Schwartz said "Yes, the Heathcote Association does own the pond and maintained it for years. But now there is considerable sediment on the bottom and it needs to be dredged. If not, the sediment will clog the fountains (bubblers) and break them."

So for now, the fountains will remain off until the dredging can be done. 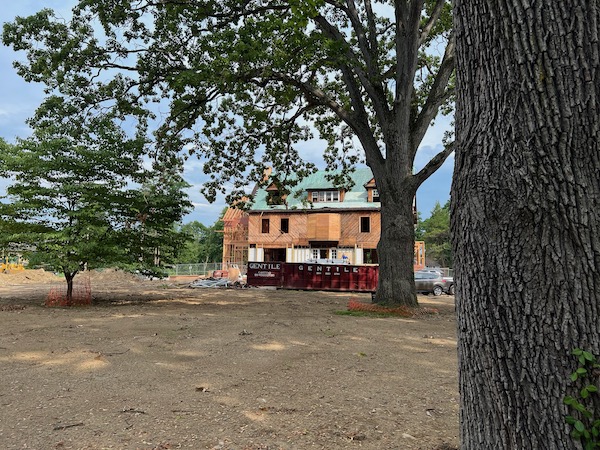 5 Heathcote RoadLast the resident said, “Our neighbor at 5 Heathcote Road is doing a major renovation of that historic house. But why were they allowed to cut down all the massive trees on the property? Isn’t there a code prohibiting the hundred year-old trees from being cut down? Also, do any of your inspectors see the partial utility pole attached and swinging from the electric wires in front of the property on Heathcote Road? Must it take a power failure for this to be fixed?"

We looked up the property record on the Village website and see that the developer was approved to do a gut renovation of the house, remove and replace the pool and patio, and build a one and two story addition with a garage at the right and rear of the existing house. There was approval for the installation of a circular driveway and the removal of some trees and replacement with others. Specifically, about the trees, they had permission to remove 28 trees of various species and DBH, and replace them with six trees. In addition, five to seven street trees were to be removed and replaced in accordance with the Village street tree replacement policy.

5 Heathcote Road was the former home of Seymour Topping, a famed foreign correspondent for the New York Times, and the home will be renovated, not razed.

About the utility pole, this could be the responsibility of Con Edison.

Do you have questions? Email us at scarsdalecomments@gmail.com and we’ll investigate.