Man Arrested for Possession of Semi-Automatic Handgun in Greenburgh Home 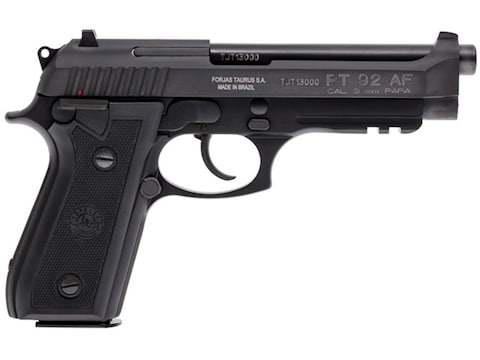 Greenburgh Police were called to a home at 332 Ridge Road at 6:50 pm on June 26 about a fight in the basement and the possibility that a man there had a firearm.

Before they arrived, there was a report of car fleeing the scene with three to four men inside.

Police entered the house and found two residents of the home and a man later identified as Daniel Bigelow with a gunshot wound in his leg.

The resident said that Bigelow had been dropped off by the occupants of the car. He pulled out a black semi-automatic 9 mm handgun and fired at one of the residents, missing him. During the struggle that ensued, Bigelow shot himself in the leg.

Bigelow was taken to Westchester Medical Center in stable condition and is expected to survive. He was arrested and charged with PL 265.01 Criminal Possession of a Firearm, a class E felony. 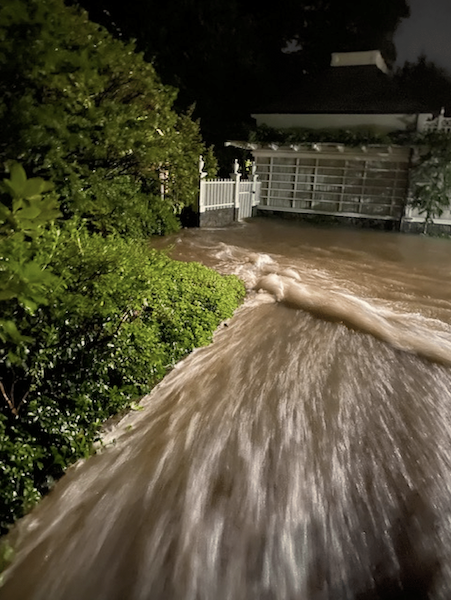 Water rushed into a home on Willow Lane during Hurricane Ida in September 2021.The Village Board of Trustees got some pushback from an attorney and residents on proposed changes to flood damage prevention laws that do not go far enough to address longstanding issues with flooding in the Village.

On Tuesday night June 14 the Board held a hearing on code changes to bring the Village into compliance with FEMA requirements for flood damage protection.

In summary, the changes would require new and replacement equipment and prefab homes located within a Special Flood Hazard Area to be sited two feet above the base flood level, to prevent damage during storms. The requirements pertain to electrical equipment, heating, ventilation, air conditioning, plumbing, pool equipment and generators.

According to a memo from Village Planner Greg Cutler, “The purpose of this code is to require that all new or substantially improved development meets a higher standard for flood safety and damage prevention. The freeboard requirement ensures that new construction and substantially improved construction remains safe and undamaged during flood events that exceed the base flood elevation for a 1% annual chance storm.”

At the hearing, the Board heard from attorney Helen Mauch of Mintzer Mauch LLP who is representing 30 clients who live in in a sensitive drainage area along Garden, Cushman, Willow and Sheldrake Roads.

She pointed out that these changes do nothing to address her clients’ concerns about flooding risks from construction. She said that her clients have written to the Village to ask for stricter requirements in sensitive drainage areas including grade changes, tree removal and retaining walls, as recommended by the Village Engineer.

She wanted to know why the Village was taking a piecemeal approach to the issue and said these proposed changes are “simply not enough.” Furthermore, the Board has rejected her clients’ request to impose a temporary development work moratorium, even though it's well within the Board’s authority to make the legislative changes that will provide some protection to residents living in sensitive drainage areas. Ms. Mauch asserted that the “changes need to be made now.”

Her client Helen Maccarino of 83 Cushman Road also spoke. She told the board that “a lot of neighbors are struggling with the repetitive flooding that goes on primarily due to stormwater runoff,” and asked the Board to amend the code. She asked the Board to be more specific about when they will be tackling this issue and said it should be given a high priority due to climate change and more ferocious storms that are happening more frequently.

Bob Harrison also voiced his concerns about flooding of the sanitary sewer lines. He said there have been issues with roots growing into the lines. He also complained about heavy rains flooding basements.

Both the Mayor and the Village Manager responded.

Veron said, “she understands the frustration and that they all feel and the sense of urgency on the storm sensitive drainage areas and the need to address it.” She said it was not an issue of priorities and that the Village Managers are working behind the scenes to address the issues.

Village Manager Rob Cole said, “Staff is working in parallel on a number of different projects, one of them would be the sewer lateral inspection law that will be coming to the Village Board within approximately 30 days.” He also discussed a “flood study” to target flood relief throughout the community, as well as some local laws to deal with sensitive drainage areas.

He said the staff will work with the Village Board to vet the proposals and a work session with the full Village Board will be planned. However, he warned, “There’s almost no infrastructure project or code change that's going to preclude the types of events such as a storm like Tropical Storm Ida and some of the more intense rainstorms that cause flooding damage on Scarsdale properties.” 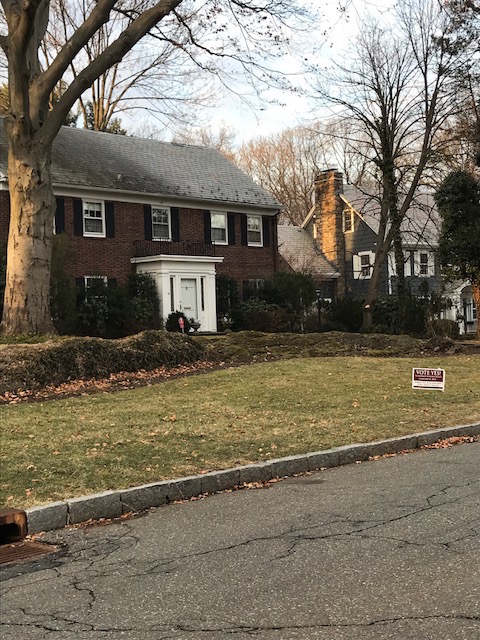 Also on the agenda was a hearing about a proposed new law prohibiting signs in the Village right of way. The new code would apply to all signs, regardless of content. The law simply bars all signs in the right-of-way, which is usually ten feet from the curb. If passed by the Village Board, the law would require most signs to conform to these new requirements within 60 days, with an exemption for signs that will cost more than $1,000 to relocate, providing evidence is supplied to support a waiver. There are exceptions for signs at a place of worship or a country club.

Bob Harrison asked whether or not the legislation includes an amortization schedule. Rob Cole responded that the law includes definitions of what constitutes a non-conforming sign and under what conditions they have to be brought into conformity. It specifically references the $1,000 and provides a reasonable pathway for all signs to ultimately be brought into compliance without presenting an extreme hardship for any one individual or entity to remove a sign simply because the law changed.

Read a draft of the proposed code here:

In other news, the Board approved:

-a resolution for the Scarsdale Business Alliance to hold their annual sidewalk sale from Thursday July 28 to Saturday July 30 in Scarsdale Village. 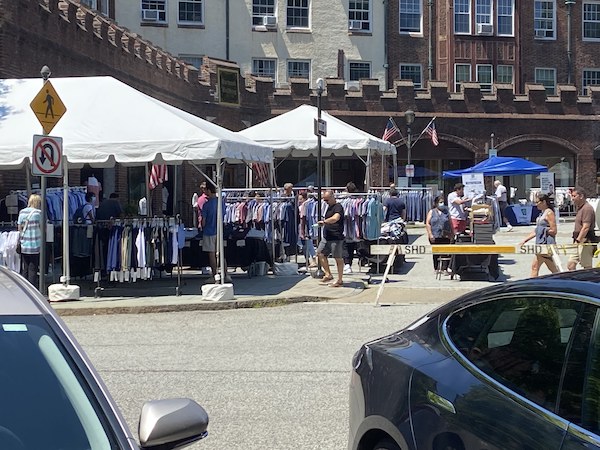 -a contract for Coach Bus Services for the Teen Travel Camp

-An administrative award for Detective James Gannon for the arrest of a suspect in a serious assault with a knife in June 2020.

-An administrative award for Detective Robaire Johnson for his work in capturing the suspect involved in the same incident, for road rage incident leading to a stabbing.

Letter to the Editor: Anti-Abortion Trespassers Should be Give the Maximum Sentence 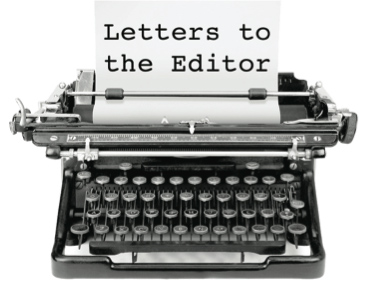 To the Editor:
The right to abortion isn’t just under attack... the women in our local community are being threatened. Christopher Moscinski, Matthew Connelly, and William Goodman were found guilty of criminal trespass after invading All Women’s Health & Medical Services on November 27, 2021. They must be given the maximum sentence allowed by law— three months in jail and a $500 fine.

This is far from a rare occurrence. The three perpetrators belong to anti-abortion extremist group Red Rose Rescue, which repeatedly ignores state and local trespassing laws, as well as the privacy of patients. The group is proud of the terror their members inflict on anyone seeking reproductive health care— they videotape their attacks and brag about the harm they cause through online religious newspapers. This attack is no different. The three invaded the health care center and refused to leave, harassing and intimidating both patients and staff.

Red Rose Rescue continues to wreak havoc on health care centers because its members are rarely ever sentenced for their repeated crimes. Letting these men go wastes taxpayer money and time for the legal system and police department. These men cannot get away with a simple slap on the wrist. We want to see our money spent right, and the justice system serving sentences that fit these crimes. This group makes a mockery out of the justice system, wasting resources and continuing their heinous crimes with no intervention from our local law enforcement.

It’s not much to ask our local law enforcement to protect our reproductive rights and simply stop the harassment inflicted on those who seek health care. We cannot live comfortably with the fact that we’re in a democratically controlled state and county. Abortion will be legal in New York even if Roe v. Wade is overturned, but that does not mean access to health care will be easy. We need to acknowledge that there are anti-abortion groups in our community and they are very dangerous. By not giving the three guilty perpetrators a proper sentence local law enforcement would be condoning their despicable actions. The maximum sentence will not only act as a lesson to Christopher Moscinski, Matthew Connelly, and William Goodman, but to Red Rose Rescue as a whole, that their unlawful actions will have consequences. 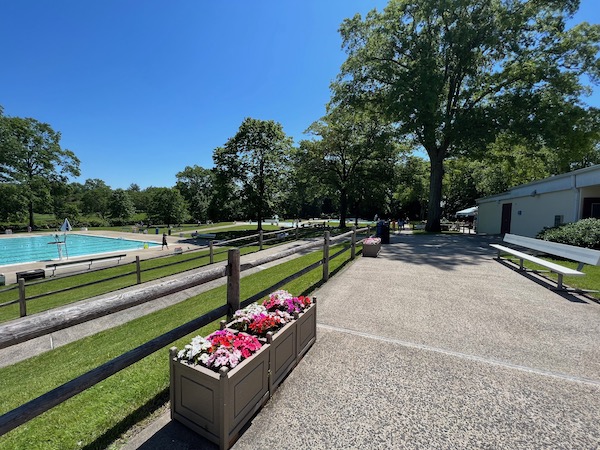 Mayor Veron to YOU: Please Take the Pool Survey!
Check out Mayor Jane Veron’s brief interview on the Pool Complex Study. In this video short, Mayor Veron explains the crucial decisions we all face as a community regarding the future of this treasured community asset.

She also encourages everyone to participate in our online Pool Survey, which closes on June 17. We want to hear from you, so jump in and tell us what you think! 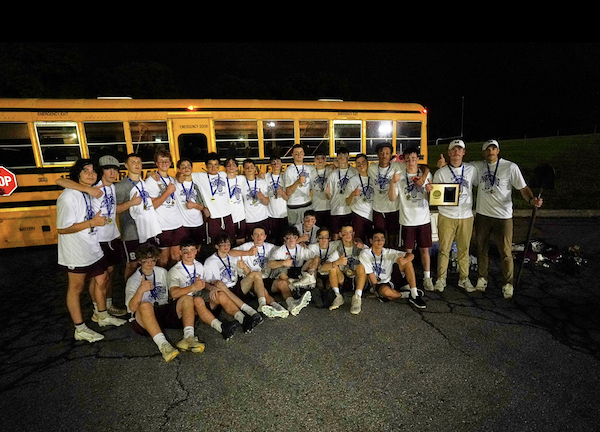 Junior Nate Seslowe soared in this game, netting four goals and pressuring Mamaroneck to keep up with the fast pace rhythm of Scarsdale. “I knew this was the greatest time to shine,” he said. “I didn’t want to let my boys down. We’ve been looking forward to this game all season and I knew this was the time to make plays. It took more than me. We all played a complete 48 minutes and showed the section who we are.”

After losing 13 seniors last season, Scarsdale had something to prove this year. They showed the section that they can learn on the fly, and that they run a proper program with strong athletes who work hard on the field and off. Colby Baldwin was outstanding, collecting 18 faceoff wins. And his goal off the faceoff win further demoralized Mamaroneck. Goalie Andrew Lehrman made 14 saves, Graydon Diamond had 2 goals, Ryan Ornstein scored twice, Wade Massey and Rhett Needleman each had one goal.

On Wednesday night, 6/1, Scarsdale advanced to the subregional game against Kingston at Mamaroneck High School. A severe storm with rain, winds and lightning caused the game to be canceled with only five minutes to play in the third quarter, and the Raiders leading 13-5. The game will resume on Thursday June 2 at 4pm at Mamaroneck and if they win they play on Saturday in a regional final vs. Shenendehowa in Albany.

(Pictured at top) Scarsdale Lacrosse Team after their Class A win on May 27, 2022. Photo credit Elliot Zhang

Photos below from Jon Thaler taken at the game vs. Kingston on June 1, 2022. See more and buy yours here: 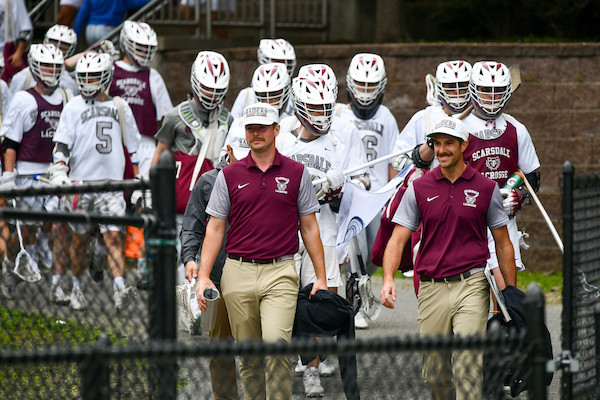 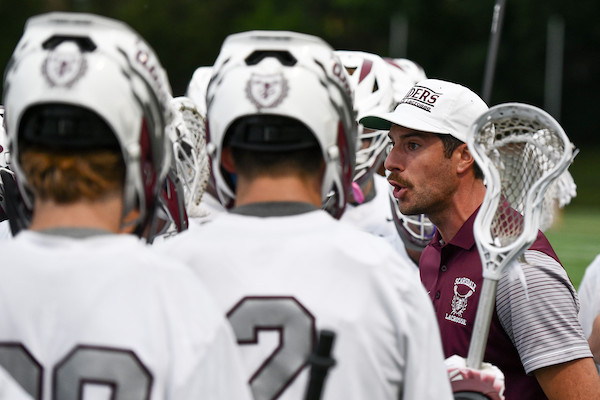 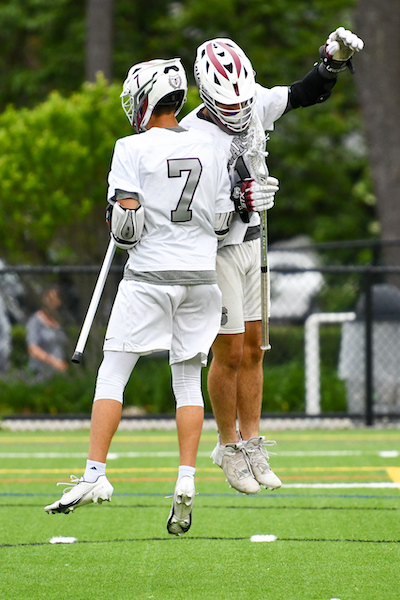