Board Hears $4.7 mm Proposal to Revamp SHS Auditorium and Asks, Is This The Way To Go? 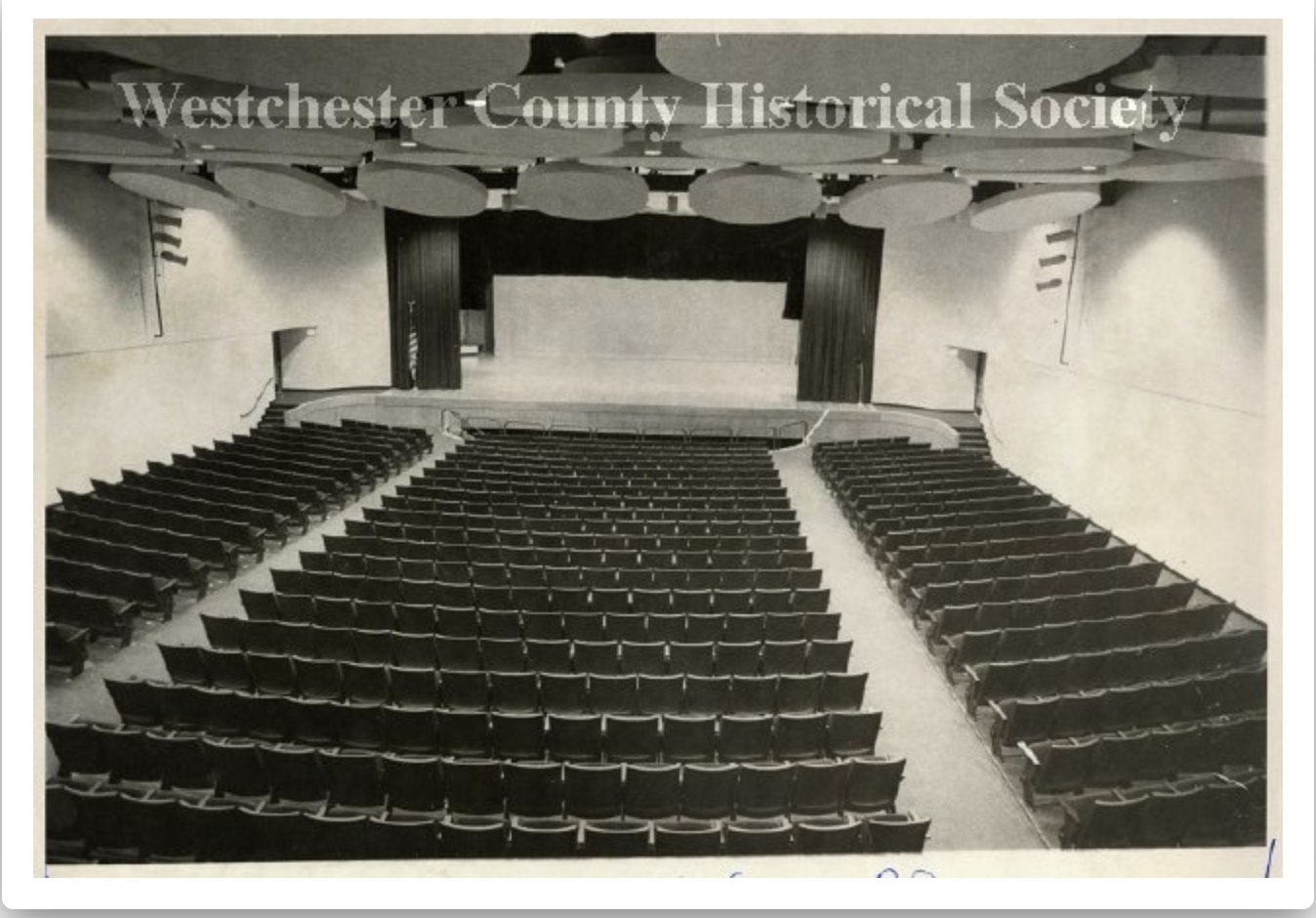 The SHS auditorium circa 1980?It’s the project that doesn’t get done. Long in need of renovation or even replacement, the Scarsdale High School auditorium gets shabbier each year. Worn and torn carpets, broken seats and shedding ceiling tiles are the most visible of the issues, but the needs extend far beyond what the audience can see.

Who knew that the original auditorium, built in 1938, was actually “gymnatorium,” which could function both as a gymnasium and a performance space, similar to the facilities at Edgewood and Greenacres Elementary Schools. As it was not primarily a performance space, acoustics, lighting and even sight lines to the stage were not a priority. The audience area is not pitched steeply enought to allow the audience to view the stage from many areas  of the room.

But after large gymnasiums were constructed at the school, the auditorium was improved.

In the early 1980’s these renovations included:

In the mid-2000’s more work was done with the installation of the orchestra lift, updates to the sound and lighting systems, replacement of the curtains and rigging system and refinishing of the woodwork.

Finally the 2014 bond project included $1mm for the auditorium to address a host of outstanding issues, but due to cost overruns on other projects, only the water mitigation issue at the school was dealt with at the time. In subsequent budgets, funding has been allocated to address the rigging, lighting, sound system, and electrical systems.

Unfortunately, there is still much to be done. In fact, the current estimate to address the remaining needs is $4.7 mm.

At the school board meeting on Monday November 14, Ken Schupner an architect with BBS presented the findings of the High School Auditorium Committee who has been working to assess needs, look at comparable schools and get community and user feedback. 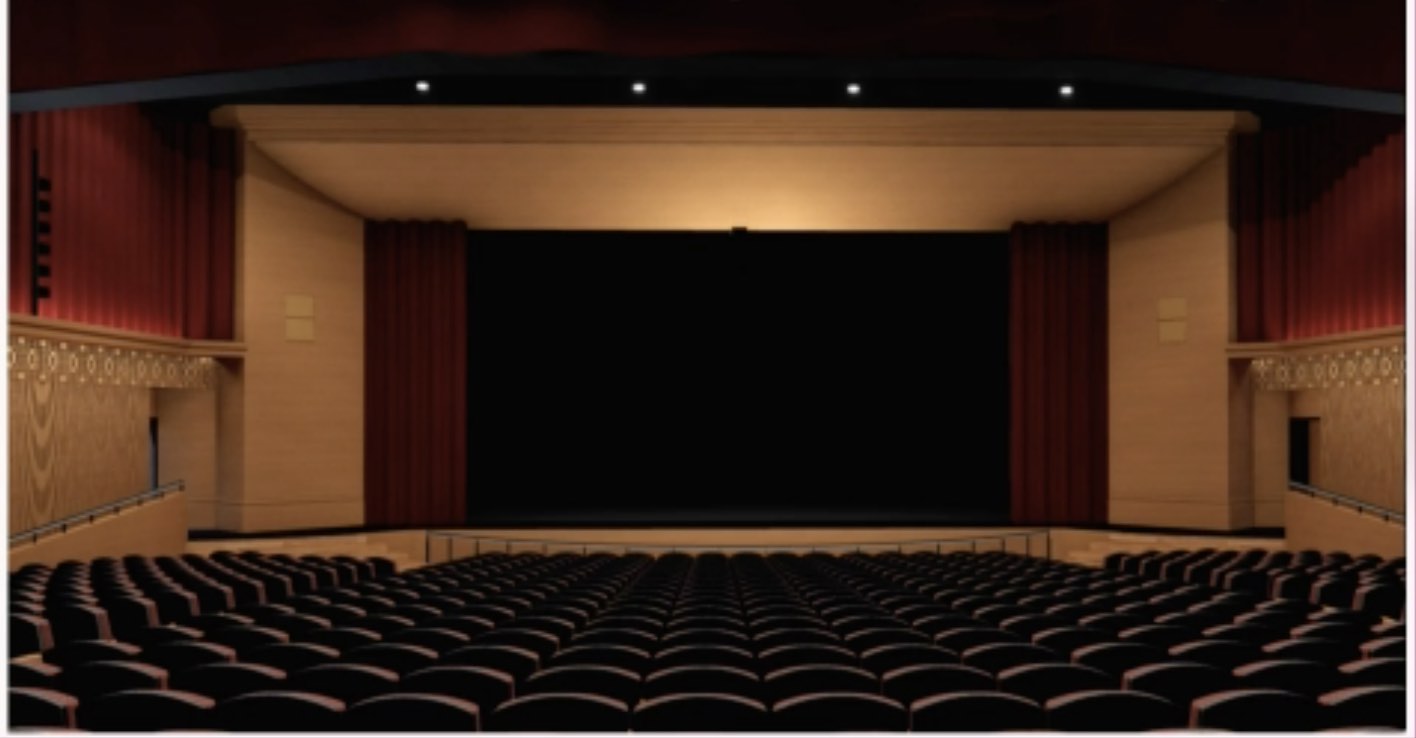 Proposed improvements to the stage - and proscenium

Among the problems that were identified were:

Acoustics: consultants identified deficiencies in the rooms design and proportions, the proscenium(area in front of the curtain), in the ceiling, the HVAC and found acoustical dead spots. They provided a lengthy analysis of troubles pots that can be seen here:

But that’s just the beginning.

The seating is in disrepair
The wood paneling is deteriorating with section missing and damaged
The carpet is frayed and torn
Access to the auditorium is asymmetrical and lacks optimal function
The catwalk is impractical for student us and potentially safety concern
Tormentor bars are inaccessible to student and adults. (Teasers & tormentors are stage curtains that are placed immediately upstage of the proscenium arch to reduce or reshape the size of the opening.)
Lighting instruments on one side cannot be focused, serviced or used effectively.
There is limited dressing room and costume storage space.
The stage flooring is aging, there is wear and tea, splintering and erosion of the surface that presents safety concerns
Audience sight lines are limited and challenging because the pitch of the seating area is not steep enough to provide clear viewing angles.
Persistent water intrusion remains a problem in the music rooms and backstage area. Due to an aging roof system the leaking prevents full utilization of the backstage storage area.

To help the Board visualize these issues, the committee created a video with a tour of the facility showing where the problems exist and how it limits the student experience.

The video includes SHS Principal Ken Bonamo who says, “Renovating the auditorium has been on our docket for a decade. Now we have the opportunity to do the whole thing at one time.
Investments in facilities have to match investments in education to have performances at the level the community expects. I understand the significance of this investment and I thank you for your support of this project.” 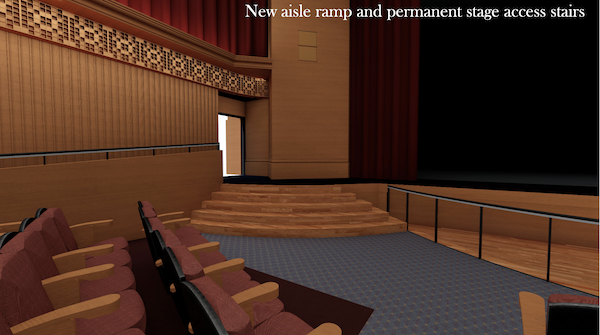 Stairs would be added from the audience area to the stage.Architect Ken Shupner then gave an explanation of the renovation plans which included:

Lighting Recommendation:
Remove power and requisite cabling from the front-of-house lighting batten, and move to the catwalk

Backstage Area Recommendation:
Remove the wall dividing the costume storage hallway and the dressing room thereby expanding the usable space for dressing. Divide the single dressing room into two separate and equally-sized spaces, usable by any gender. Installation of an ADA lift in the rear corridor.

Water Mitigation Recommendation:
Include replacement of the Band Room Roof in the 2023-24 school budget Include funds in a future bond to resolve back storage area water instrusion issues.

Here are the estimated costs:

Assistant Superintendent Stuart Mattey explained that there are some funds available for this project: $2.825,152 is left over from the 2018 bond and there is also $574,839 remaining from Phase 1 and Phase 2A of the project. Also available is $135,000 in the Debt Service Reserve, bringing the total funds available to $3,534,281.

So the district would only need $1.2 mm to fund this. Mattey proposed two options for raising the funds:

Option 2 would be to bond the project. If so he suggested a bond proposition in May 2023 allowing work to be completed by the winter of 2024.

Not everyone was convinced that this is the way to go. Scarsdale School Board member and architect Bob Klein said, “As an architect I am pleased with the quality of the report and 100% in favor of improving the auditorium. But I do have serious concerns. Do the bones of the room and the DNA allow you to do what you want to do? We are trying to convert a gymnatorium into a state of the art auditorium. The price tag shocked me. It’s a lot of money to get something we really don’t want. Is this the right investment to give to the performance arts a space they want? I kept hearing we were not getting the ideal; we are able to improve it, but there is compromise after compromise for $4.7 mm. “

He continued, “What would we really want if we were to redo it? Is there a way to deliver that? I think you have solved the problem you were asked to solve – but is that the right problem? Is this really what we want to do today? It concerns me that we are trying to manipulate a space – but I am not convinced. Is this the right solution? It behooves all of us to make sure we are solving the right problem.”

Schupner replied, “We are doing the best we can with what we have.”

Klein said, “I am not sure I buy that. If I were a tax payer I would want to know that our homework was done. Can we switch this around and get what we want? We are forcing this to do what we want it to do.”

Jessica Resnick-Ault thanked everyone saying, “We don’t have to decide on this tonight – we have time to mull on it. I am glad Bob has given us another angle to consider.”

Klein continued, “What would be the right size auditorium for Scarsdale High School? I want to make sure we do the best thing we can do with our resources. It’s an exercise that can be done.”

Susie Hahn Pasciutti said, “It’s near and dear to my heart that the kids have a place to perform. If we did not do this project, where would be spend this money? What are we seeing now in terms of seats? Do we have the right number now?”

Colleen Brown agreed. She said, “This deserves our attention, sooner rather than later.”

Ron Schulhof asked, “What are other needs from the Building Conditions Survey? What is the confidence level that this will correct our issues?

Klein added, “if there was a way to build an auditorium in another part of the school, we could use this one while the other one is being built.”

As the meeting drew to a close, Patrick asked the Board for more funds to allow the architects to do further analysis of the costs for a new auditorium vs. the renonvation and agreed to put this back on the agenda for a future meeting.