Karen Ceske Leads First Board of Ed Meeting as President 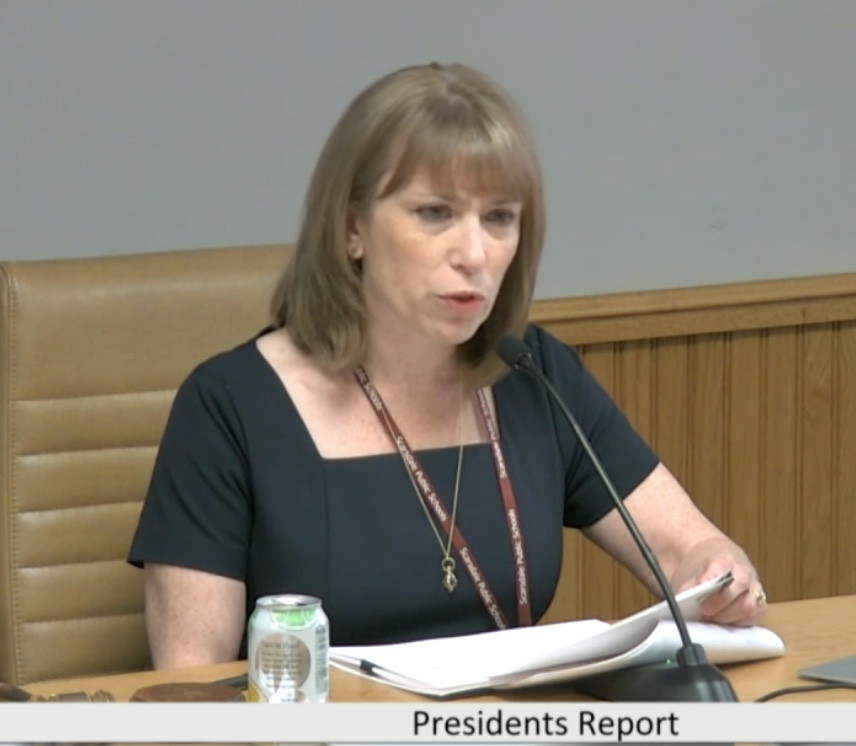 After the votes for School Board President and Vice President were finalized last week and Karen Ceske and Amber Yusef secured their leadership roles, President Ceske immediately began her work and led the first Business Meeting of her term.

During her remarks, Ceske said she was thankful for the opportunity to lead the Board and excited to get started working on the District’s strategic plan and upcoming initiatives for this school year.

In his opening statement, Superintendent Hagerman congratulated the entire staff and student body on a very successful high school graduation ceremony. He welcomed new Board members Jessica Resnick-Ault and Jim Dugan and said he is optimistic about the village’s recovery from the trauma of the past 16 months. While he acknowledged that the COVID-19 Delta variant is an area of concern, the administration is keeping a close watch over the situation and will take any necessary mitigation efforts to keep students and staff safe.

The first item on the agenda was to approve the recommendations for various administrative positions, including the District Clerk, Claims Auditor, Section 504 Coordinator, Title IX Coordinator, Employees Coordinator, Records Access Foil, and District Emergency Coordinator. These positions were assigned to various members of the school board and district administration.

The Board then moved to review the Scarsdale Code of Conduct. The administration noted that this year’s code contained few changes from previous years and that it was reviewed by a committee comprised of administrators, high school student representatives, two Board members, PTC representatives, and the District Attorney. All students have a version of the code available in the appropriate language for their reading level available in their yearly Scarsdale agendas. New Board member Jessica Resnick-Ault found an inconsistency and noted that while the code states that visitors do not need to report to security personnel before attending PTA meetings in the high school and middle school, she does not believe that is reflected in our current procedures. Superintendent Hagerman said that this issue will be reviewed.

Next, the Board approved several new textbooks for the upcoming school year. The first was The Night Diary, by Veera Hiranandani, for 7th grade English. The book takes place after the partition of Pakistan and India in 1947 and tells the story of a young refugee’s search for home and her own identity. The administration noted that the English and Social Studies departments collaborate to ensure that students learn the historical background of the partition necessary to fully understand the historical context and significance of the book. The second textbook was History Lessons, by Dana Lindaman and Kyle Ward for 12th grade AT history. This book teaches U.S. history by examining historical events from the perspective of countries around the world. For example, the textbook teaches the Nigerian perspective on the European slave trade. The third book is Unlocking the Potential of Post-Industrial Cities, by Matthew E. Kahn and Mac McComas, for the high school City 2.0 course. This book examines the economic failures of six cities and asks how public and private sectors can create policies and make investments that allow a city and a population to thrive. The last approved book was Simon vs. the Homo Sapiens Agenda, by Becky Albertalli, for the 10th grade English skills class. This book is the basis for the popular film Love, Simon, and tells the story of a high school boy growing up and coming to terms with his sexuality.

After reviewing textbooks, the Board approved the food services contract renewal with the Compass Group, which is an extension of the emergency contract from this past year. The Board then adopted the 2021-2022 tax levy, the proposal for athletic training, the physical therapy and concussion management services for interscholastic athletics proposal, the CSEA transportation memorandum agreement, and the CSEA custodian memorandum agreement.

The Board then briefly discussed the district safety plan. Board Member Jessica Resnick-Ault asked if they could review the plan within a committee before approving it, however, Superintendent Hagerman emphasized the importance of having the plan approved and in place as soon as possible. He stated that the administration is committed to answering any questions and reviewing Board suggestions, but that it is important that the Board not delay the approval. Member Ron Schulhof and others noted that they would feel comfortable approving the safety plan so long as it is a living document and members can bring it up for discussion and recommend changes at any time.

Finally, the Board heard from resident Jennifer Zola, who was the only person to speak during any of the three public comment opportunities. She congratulated the new board members and officers, and she singled out the efforts Karen Ceske and Ron Schulhof have made this past year to keep the community informed and involved with Board work. Ms. Zola also said that she would prefer if, in the future, Board of Education meetings would focus more heavily on agenda items, and less so on using the meetings as a means of communication with the community. These meetings tend to be attended by very few members, and she pointed out that there are likely far more effective means of disbursing information to the village at large.