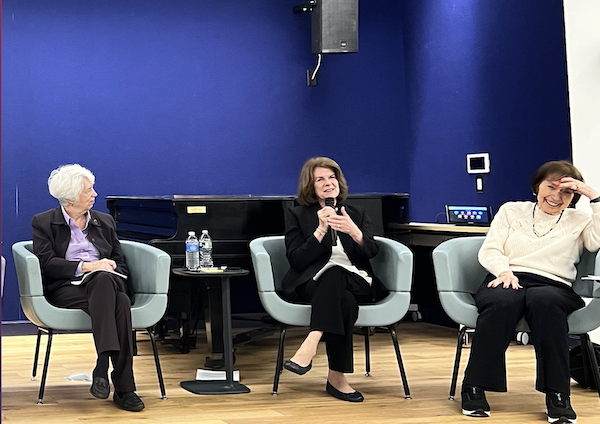 Linda Leavitt, Anne Janiak and Evelyn StockImagine an era when women were excluded from civic organizations, forced to wear white gloves and even identified by their husbands names. Four prominent Scarsdale women remember these times well and shared their stories at a panel discussion on April 24, titled, “A History of Women in Scarsdale: A Firsthand Account.” Moderated by Jordan Copeland, Associate Village Historian and Dara Gruenberg, Friends of the Scarsdale Library President and member of the Scarsdale Forum Board of Director, panelists included Lynne Clark, Anne Janiak, Linda Leavitt, and Evelyn Stock, four longtime Scarsdale residents who have been at the forefront of their respective fields in real estate, journalism, government, and civic affairs in the second half of the 20th century. The presentation was a part of the Forum’s “Sunday Speaker Series,” and was co-sponsored by the Scarsdale Public Library and the Scarsdale Historical Society.

For the introduction, Copeland gave a brief history of women in Scarsdale, highlighting their involvement in the Women’s Suffrage Movement and the formation of several community service organizations, including the Scarsdale Woman’s Club, Scarsdale-Edgemont Family Counseling Services, Friends of the Scarsdale Public Library, the Scarsdale Art Association, the Scarsdale Community Fund, and the League of Women Voters Scarsdale (LWVS). Copeland also described the growth of women’s involvement in civic activities and their important role in local government, the Scarsdale School Board, and the local business community.

The panel discussion began with Clark and Leavitt offering their recollections of attending Scarsdale schools in the 1950s and 1960s. Clark entered Scarsdale schools in seventh grade and served on numerous committees in high school, which culminated in her being elected “Done Most for Scarsdale High School” in 1952. Clark reflected how the demographics of Scarsdale High School were notably different in the 1950s from present day; her graduating class was comprised of 228 students who were “mostly White, Protestant or Catholic,” with a few Jewish students and only one Black student. Clark enthusiastically noted the current Scarsdale High class size has more than doubled since then and currently represents students of “all colors and all religions, and it’s a wonderful change.” 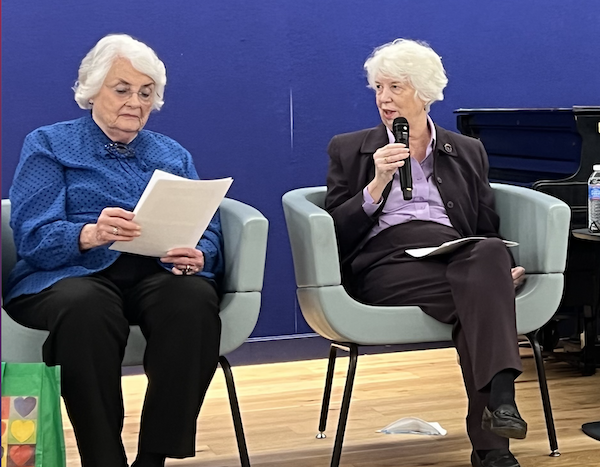 Lynne Clark and Linda LeavittLeavitt also began attending Scarsdale schools in elementary school in the 1950s. Following her family’s move to Scarsdale in 1954, she attended Greenacres Elementary School and was in the first class to go all the way through the Scarsdale Junior High School. Leavitt pointed out that elementary students went home for lunch during that era, and she was aware of only two mothers who worked outside the home. She remembers it was not uncommon for parents to begin socially segregating families of different religions around junior high school age; she further remarked how the Holly Ball scandal in 1960 raised her awareness of religious discrimination, when an invited ball escort at the Scarsdale Golf Club was deemed unsuitable because his father was Jewish. Leavitt recounted that when she was a teenager, her mother worked at the White Plains Library for a period of time after her father lost his job in advertising; Leavitt described this as an “eye-opening” experience that people do not have to necessarily ascribe to traditional gender expectations for men to earn income and women to handle domestic responsibilities.

The discussion then segued into the panelists’ professional and leadership roles within Scarsdale organizations. Janiak and Stock spoke on the importance of the League of Women Voters Scarsdale (LWVS) and their respective terms as League President. Stock joined the LWVS in 1970 and described it as “probably the best thing that could have happened to me coming to Scarsdale,” but still remembers her initial shock when she first saw her name on the member list as “Mr. Howard Stock (Evelyn).” Though standard for the time, Stock took quick action to change the format permanently. One of Stock’s personal priorities at LWVS was to increase membership numbers, and during her tenure the LWVS had more members than any other league in the U.S. except for New York City. Another notable shift that took place during Stock’s tenure was holding meetings at night in order to accommodate women who worked. She remarked the LWVS commanded respect from historic all-male organizations such as the Town Club because the LWVS issued numerous studies and “made a difference” by commenting on the non-partisan system, the school budget, village budget, and other important local issues, which over the decades were also activities of the Town Club. Stock would subsequently serve on the Scarsdale Board of Education in 1986–1992, serving as its president in 1991. 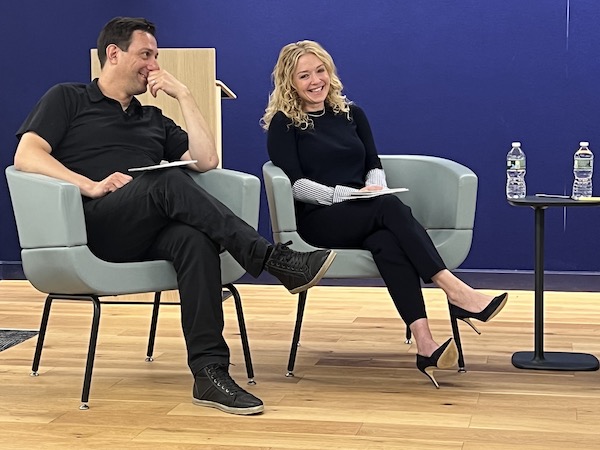 Moderators Dara Gruenberg and Jordan CopelandJaniak related her own experience with LWVS, which she described as “an excellent training ground to work with knowledgeable women who cared about the Scarsdale community,” and an organization that offered mentors and role models to her. She cited her experience as League President as a foundation for her government leadership, which included serving two terms as Village Trustee and then Scarsdale mayor in 1995. Janiak describes her time as mayor as a wonderful experience where she not only managed all Village services ranging from zoning and planning to trash collection and water systems, but also learned more broadly about “human nature, the community, and people’s behavior.” Janiak cited the determination of her predecessors such as Harriette Krantz, who was one of the few women village trustees during the 1950s. Though she did not work in the city, Krantz would take the morning Metro-North train to ensure her inclusion in conversations her male counterparts had while commuting, and then Krantz would take the train back to Scarsdale afterward. “Hard to imagine [now],” Janiak noted. Janiak said that, although she did not necessarily face direct gender discrimination as mayor, she recalled discussions that occurred during her time as trustee when Elaine Schroeder’s term concluded (leaving Janiak as the sole female on the village board), when certain board members expressed skepticism on whether the board should be aiming for gender balance in its representation.

Leavitt discussed her career in journalism as reporter and editor of the Scarsdale Inquirer. She mentioned that for 73 of its 121 years, the Scarsdale Inquirer has been “run and owned by women, and edited by women by nearly that long,” with a staff of mostly women as well. One memorable experience from early in her reporting career was when the Scarsdale Board of Trustees brought the “Creche” case to the Supreme Court in 1984. She was only six weeks into the job. Among the countless articles Leavitt oversaw as editor from 1991–2015, she mentioned one that resonates today: an investigative series on domestic violence written by Louise Wollman that won first place in a New York Press Association contest when that was “a taboo subject in the early 1990s.”

Drawing on her involvement with “almost everything” in Scarsdale for several decades, Clark described some changes she has observed regarding the role of women in the community over time. Clark recalled that when she was a young woman, most women in Scarsdale were not really pursuing professional opportunities. Although Clark’s father discouraged her from getting a job, she “liked to work” and ultimately pursued a longtime career in real estate. When she initially interviewed for the Junior League, she was required to wear white gloves. Clark went on to serve as President of the Junior League and remains proud of her involvement and the evolution of the organization, which still focuses on serving the community and the spirit of helping others but is more open and inclusive. Similar to Stock’s experience at the LWVS, Clark recalled the Junior League listed her as “Mrs. Merrell M. Clark,” and remarked that “it’s hard to believe” it was standard for women to not only take the names of their husbands but also be identified by their husbands’ names in society.

The women addressed the historic exclusion of women from powerful all-male organizations such as the Town Club, which did not permit female members until ten women filed a successful lawsuit in 1973. Leavitt remarked that one unfortunate by-product of the lawsuit was that organizations such as the Town Club and Village Club were perceived to lose clout after they began admitting women, and ultimately merged as a result. The topic of historic and present-day diversity was further discussed in the context of membership in houses of worship. Janiak acknowledged the current population of Scarsdale is diverse in several aspects, but would like to see more socio-economic diversity. Stock remarked that when she moved to Scarsdale in 1970, residents included firemen, policemen, and teachers, and finds it troubling that those professions have a harder time affording Scarsdale now.

The discussion was followed by a Q&A when panelists offered their recollections about how college expectations were not necessarily the same for women decades ago, given that some of the top universities such as Yale did not yet admit women. They reflected on how business and entrepreneurship has changed for women over time. Janiak recounted that women business owners were unable to get a bank loan in their own name until 1988, when the Small Business Administration created the Women’s Center Business Program which eliminated the requirement of having a male co-signer.

The audience asked whether different lifestyle options were available to women in Scarsdale in the 1950s and 1960s. Leavitt recalled that she only knew of two divorced mothers in Greenacres during her childhood. She remarked that Scarsdale was a “social desert” for divorced individuals even after her own children were adults. Leavitt and Clark described the Girl Scouts as an important organization which empowered them as young women and provided positive role models. The panelists concluded with expressing gratitude for their teachers and educational mentors, with Clark mentioning Mary Schumann of Scarsdale High School in particular. Clark noted “most of the teachers were men” at that time and she still treasures her relationship with Schumann to this day.

The program was presented to an in-person audience in the library’s Scott Room and simultaneously live-streamed over Zoom to an audience of approximately 70 attendees. An audio recording of the program may be accessed by contacting the Scarsdale Forum Program Committee, program@scarsdaleforum.com. 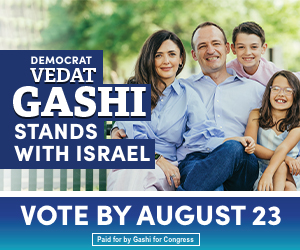