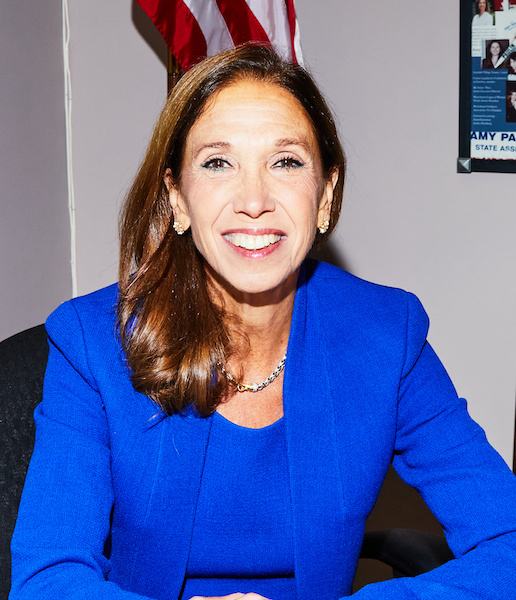 Assemblymember Amy Paulin (D-Scarsdale) announced that her bill (A.9169/S.8262) has passed in the New York State Assembly which requires all airports of the Port Authority of New York and New Jersey, which are JFK International, Newark Liberty International, LaGuardia, New York Stewart, and Teterboro airports, to provide information on support services for human trafficking victims. It will now proceed to the New York State Senate where it is sponsored by Senator Anna Kaplan.

The bill requires the airports to have informational cards or signs available in public restrooms. Such items would contain information on services for trafficking victims as well as the national human trafficking hotline number.

“Since trafficking networks often rely on air travel to transport victims, we are including airports in our efforts to help these victims,” said Assemblymember Paulin. “For some victims, the information they will see in an airport restroom may be the only opportunity to learn about services available to them. Ideally a victim will take a card or a photo of a sign and call the hotline for help either on the spot or at a later time.”

Human trafficking is a global phenomenon that generates $150 billion in annual profits. In 2021, an estimated 25 million people were trafficked. Airports are known hubs used to traffic victims both internationally and domestically, and as a result they are an ideal location to provide information about victim services. This information will inform victims, as well as other travelers, about the availability of services.

Pursuant to the bill, the posters and cards must include information on human trafficking services and must prominently display the national human trafficking hotline number. Many victims are heavily supervised and controlled while in transit, preventing them from safely seeking help or finding resources for fear of retaliation. By having the victim services informational signs or cards posted in all restrooms, victims will have easy access to the information.

“Through this legislation, airports can assume a more prominent role in responding to and preventing human trafficking,” said Assemblymember Paulin. “It will also afford victims a resource to help escape their capture.”

This bill is the latest in a host of legislation authored and passed by Assemblymember Paulin designed to strengthen New York’s laws against human trafficking. In 2014 she passed a law ensuring that human trafficking victims who are 16 and 17 years old will be treated as victims instead of criminals and get the services they need (Ch. 402 of 2014). In 2015 she passed the landmark “Trafficking Victims Protection and Justice Act” to increase the accountability of buyers and traffickers, providing law enforcement with additional tools to identify traffickers, and providing victims recourse to recover damages from their traffickers (Ch. 368 of 2015). In 2016 she passed a law requiring hospitals to establish written policies and procedures for the identification, assessment, and treatment or referral of suspected human trafficking victims (Ch. 408 of 2016).

In 2018 Assemblymember Paulin passed several anti-trafficking laws, including the End Child Sex Trafficking Act, which eliminated the requirement for proof of force, fraud, or coercion in order to prosecute an individual for the class B violent felony of sex trafficking of a minor (Ch. 189 of 2018). Another law she passed in 2018 requires lodging facilities to provide information about services for human trafficking victims on cards in public areas, including in their public restrooms and guest rooms (Ch. 190 of 2018). She also passed a 2018 law which allows any county to move an action pending in a local criminal court to a human trafficking intervention court (Ch. 191 of 2018).

Anita S. Teekah, Esq., Senior Director, Safe Horizon Anti-Trafficking Program, said "Safe Horizon's Anti-Trafficking Program is grateful to Assemblymember Paulin for her steadfast and unwavering support of victims and survivors of human trafficking. Her recently passed bill will provide valuable and life-saving information to victims in transit during their trafficking and will hopefully connect victims to the services they critically need as they self-empower after escaping trafficking."

Nancy Downing, Executive Director, Covenant House New York, said “Trafficking victims, especially those trafficked from abroad, may find themselves in airports confused and scared with no idea of who to trust. Seeing posted information on how to get help could be their chance at freedom. Awareness of the realities of human trafficking and how to access services needs to be far reaching and we applaud Assemblymember Paulin's efforts to have this information posted in heavily populated New York airports.”

Dorchen A. Leidholdt, Esq., Director, Sanctuary for Families, said “Sanctuary for Families, the largest provider of holistic, dedicated services to gender violence survivors—including human trafficking survivors—in New York State, commends Assemblywoman Amy Paulin for her long-standing leadership in the fight to prevent and combat human trafficking. We applaud her success in securing the support of the New York State Assembly of a bill that requires airports to publicize information on support services for human trafficking victims. Providing this information to victims, and those in a position to assist them, in the very destinations in which they are being transported for purposes of sex and labor trafficking will prevent exploitation and save lives.”

“We must continue to extend protection, services, and assistance to victims, while also strengthening laws which hold those that enslave and exploit children through the commercial sex trade accountable,” said Assemblymember Paulin. “I am grateful to my colleagues in the Assembly for passing this bill and now look to my Senate colleagues to do the same. It’s critical that we help victims escape lives of abuse and exploitation at the hands of their predatory traffickers.”