Running and Winning Workshop Inspires the Next Generation of Leaders 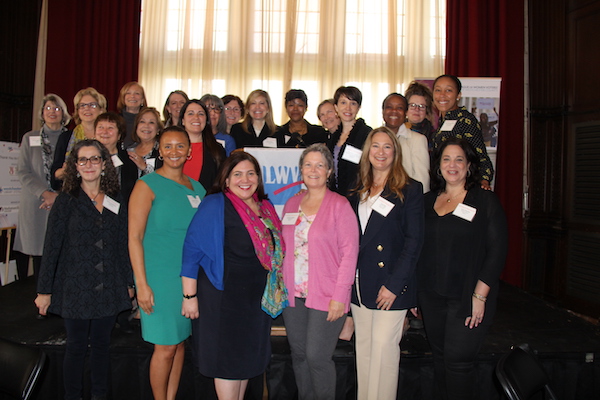 On Thursday, April 21, the League of Women Voters Westchester hosted its annual Running and Winning workshop at Reid Castle at Manhattanville College. Twenty-five *female elected officials from throughout Westchester met with 42 *female high school students from our county. Running and Winning is a unique and inspirational workshop whose purpose is to inspire and encourage young women to run for political office. In addition to supporting the students’ aspirations to serve in public office and develop their leadership potential, another aspect is to help our government institutions increase gender parity.

This year, the event was chaired by Elissa Ruback and Leah Dembitzer. Dembitzer, commented: "Running & Winning is a unique and important opportunity. We are so proud to bring this special event to students and grateful to elected officials who gave of their time and told their stories to inspire the next generation of leaders."

The young *women who participated (the League employs an inclusive definition of “woman” and “female” and welcomes all people who identify as such) were selected by their school administrators and faculty to participate in this program. The program agenda included both learning from elected officials’ experiences and practical application.

After a welcome and breakfast, the students and elected officials heard brief remarks from several elected officials from different levels of government: Port Chester Trustee, Joan Grangenois-Thomas; New Rochelle Councilwoman, Yadira Ramos-Herbert; Tuckahoe Mayor, Omayra Andino; Chairwoman of the Westchester Board of Legislators, Catherine Borgia; Yonkers Councilwoman, Tasha Diaz and State Senator Shelley Mayer. In these remarks, the officials spoke of their journey to elected office. Trustee Grangenois-Thomas spoke of the importance of “standing on your story” and being “proud of your identity.” Chairwoman Borgia spoke of having “confidence in your ideas and words.” Mayor Andino told the students that running for and holding political office is not as “daunting as it may seem.”

Following the speeches, the students participated in three rounds of casual interviews with various elected officials who rotated throughout the room. After the morning sessions, the students worked on their mock campaigns, with each student in a given group taking part as either; candidate, campaign manager, speechwriter, publicity/communications chair, and fundraising/development chair. Potential issues offered by the League for campaign platforms included: Organizing an Electric Bus Fleet, Marijuana Lounges and Dispensaries and organizing Mental Health Community Center. The majority of student groups chose to run with the Mental Health Community Center as their issue. Running and Winning 2022 was a vibrant and inspiring experience for all.
Running and Winning 2022 was sponsored by the League of Women Voters Education Fund, the Westchester Community Foundation, the Westchester Black Women’s Political Caucus, the Westchester Library System, Manhattanville College and the American Association of University Women.
*LWVW uses an inclusive definition of female.