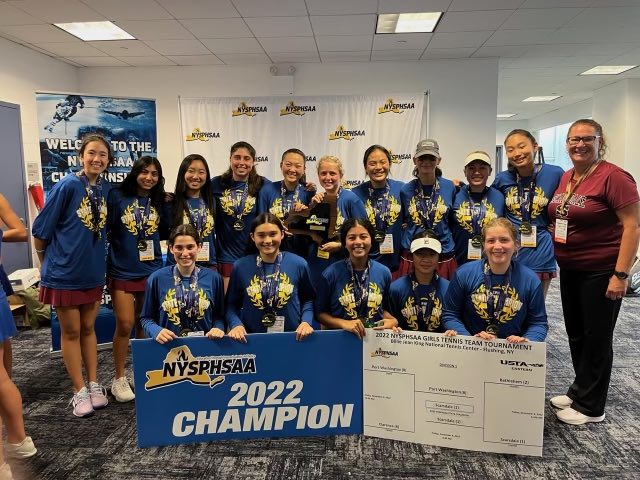 They did it again!

The Scarsdale Girls Varsity team won the state finals and are the NYS Division 1 champions for the second year in a row. Wow.

After winning the semifinal match vs. Bethlehem earlier in the day on Friday November 4, the team had to wait at the Billie Jean Tennis Center in Queens to play the finals at 4:30 pm. As expected, the team from Port Washington, who played the other semifinal match against Clarence, were the victors. So Scarsdale played Port Washington in the final.

The team played three singles matches and four doubles and needed to win four of the seven courts to win.

By 5:30 pm they had the title clinched, winning second and third singles and first and fourth doubles.

In fourth doubles, the team of Natasha Pereira and Emily Hyman, who had struggled in the semifinal scored a great win, 6-3, 6-1 over Yasmeen Munoz and Isabelle Dibner.

Though the team knew they had already won, their teammates played on nonetheless. The action then turned to the three remaining matches.

The second doubles team of Kay Cotrell and Campbell Alin won their first set 6-2, lost the second 4-6 but ultimately triumphed in the third set, 6-3.

Things got even more tense when Yelena Sahakyan, playing third doubles, stepped on a tennis ball and had to call a medic. After a timeout, her ankle was wrapped and along with her partner Maya Vora, they won, 7-5, 6-4.

Then all eyes turned to the first singles court where Scarsdale’s Natalie Hu was playing her final varsity match as a senior vs. Dasha Perfiliev. Perfiliev actually lost her semifinal match but was a tough opponent for Hu. Natalie took the first set 6-4, lost the second 2-6 and then came back from 4-5 in the third set to win 7-5, with all eyes on her court.

In the end, the team scored a 7-0 victory in the final, a joyous moment for the players, parents and coaches.

Take a look at Hu and her teammates below. 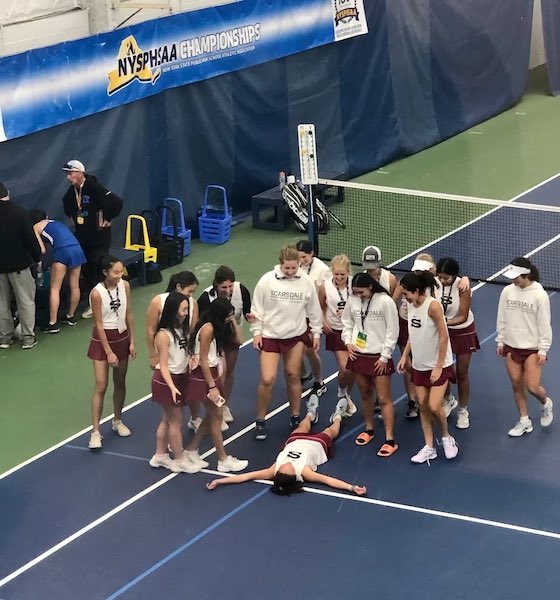 Natalie Hu - on the ground after winning her last singles match in the NYS final.

The Scarsdale Girls Tennis Team won their semifinal match against Bethlehem, 6-1 at Billie Jean Tennis Center at the USTA Tennis Center in Queens on Friday November, 4, 2022. This is the second year in a row the team has proceeded to the state finals. 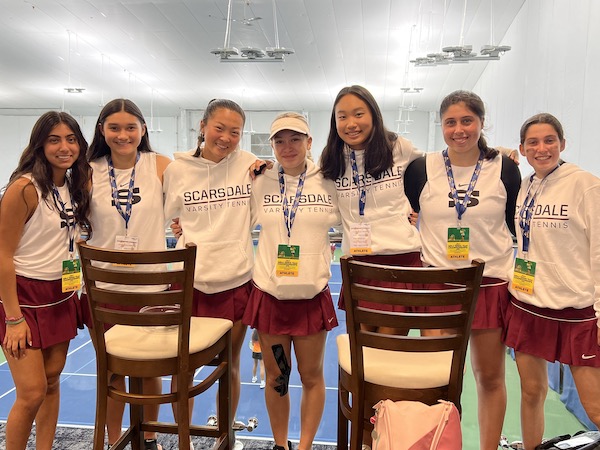 Though the matches were scheduled to start at 11 am on Friday November 4, officials put the girls on 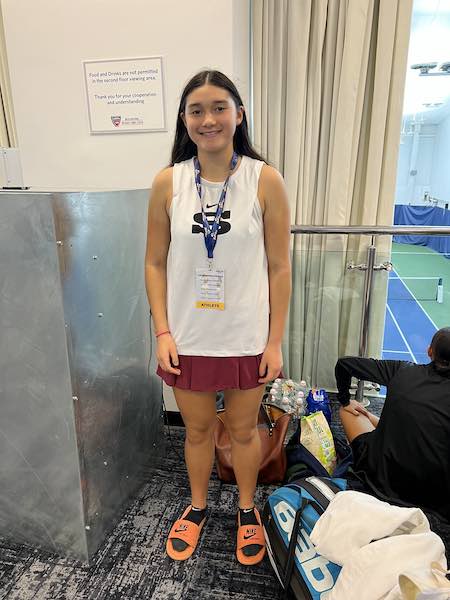 Giana Marksthe courts early, and by the time I arrived, the three singles matches were already over, with first singles player Natalie Hu not giving up a single game, taking her match 6-0, 6-0. In second singles, Giana Marks also had a fast victory, playing another leftie, and winning 6-0, 6-1. Marks said she had to watch out for her opponents slices and spins, but credited her own serves and net game for the win.

Freshman Katie Kendall also didn’t drop a game, coming off the court early at 6-0, 6-0. A newcomer to the team, she only took up tennis at the age of ten, but now plays USTA matches, 14 and under, and the Scarsdale team was happy she joined them.

As a team sport, the Raiders needed to win 4 of the 7 courts to proceed to the finals, so with victories on three courts, the match would be decided by the outcome of the four doubles matches, three of which were in progress.

First off the court was the first doubles team, senior Maya Cukierman and freshman Emma Ha. Though the score was 6-3, 6-0, Cukierman said it was a very long match. Cukierman hit wonderful deep cross court shots and Ha has great hands at the net. 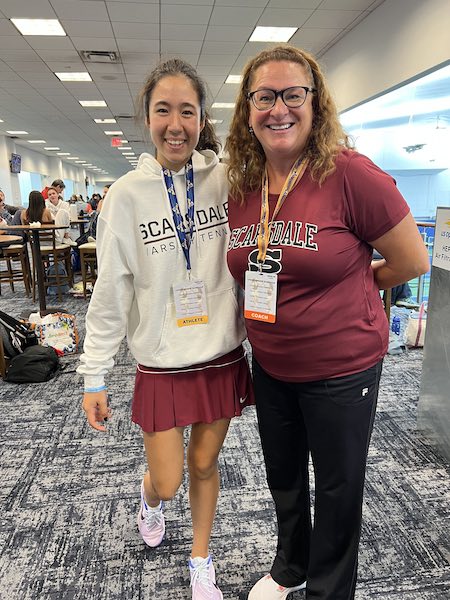 Katie Kendall with Coach Jennifer RoaneIn second doubles Kay Cottrell and Campbell Alin had a tougher match but prevailed against opponents who repeatedly used the I formation. Both girls have power at the net and Alin’s strong serve helped take them through the second set tie breaker. Commenting on the match, Cottrell said, “we worked well as a pair, kept up our energy and had good communication. They won 6-4, 7-6 (2).

In third doubles, Juniors Yelena Sahakyan and Maya Vora also had an exciting match, winning 6-2, 6-3. Commenting on the season, Vora said, “this is our third year playing together.” They talked about staying calm, focused, watching the ball and taking the match point by point. They said, “with each round it’s getting tougher and tougher.” Vora’s mom Sejal, remembered playing first singles for the Port Washington team when she was in high school, and gave the girls some advice for the next round.

The fourth doubles team of Natasha Pereira and Emily Hyman were in their third set when we left, but at that point the match had already been decided.

At 4:30 pm today, Scarsdale will take on the winner of the other semifinal match between Port 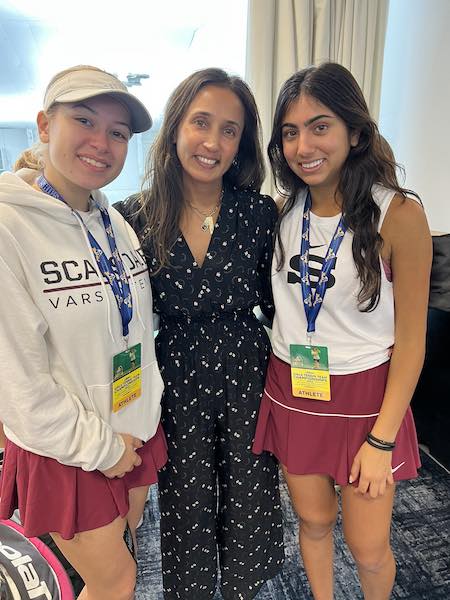 Yelena Sahakyan, Sejal Vora and Maya VoraWashington and Clarence to determine who will win the state final.

Commenting on the success of the team, Coach Jennifer Roane said they have been working on their footwork, second serves and aggression at the net. Also at the tennis center was SHS Athletic Director Ray Pappalardi who was proud to report that the girls tennis team, boys soccer team, girls field hockey team and boys volleyball teams are all still in the mix this fall. He said the players are supportive of each other, have a sense of belonging and are good sports. 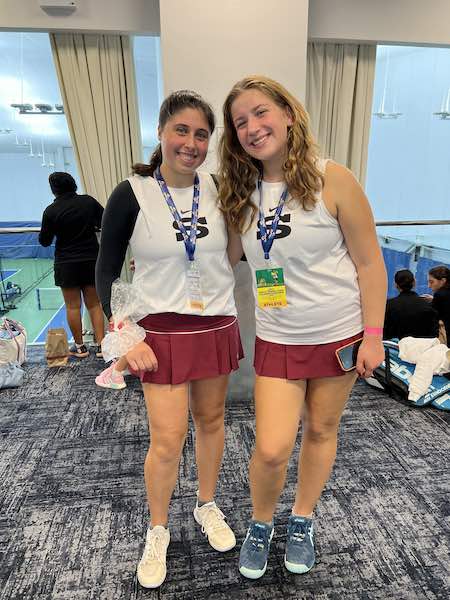 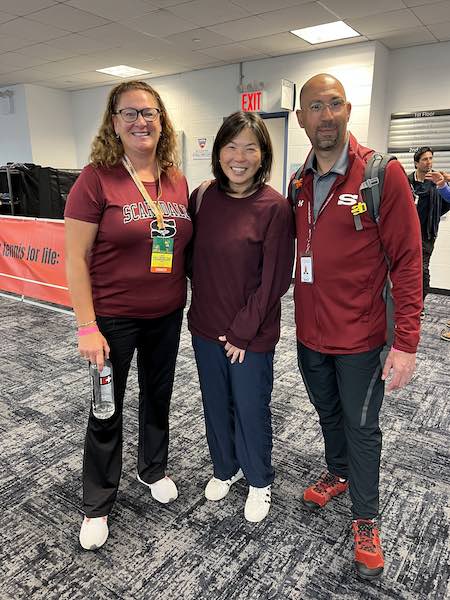 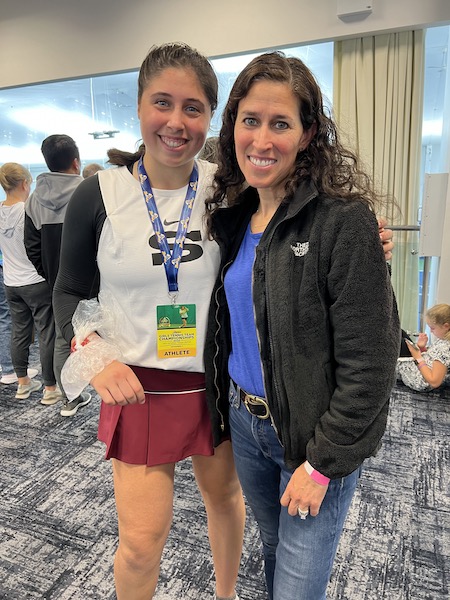