Vaping, E-Cigs and the Health of Our Youth 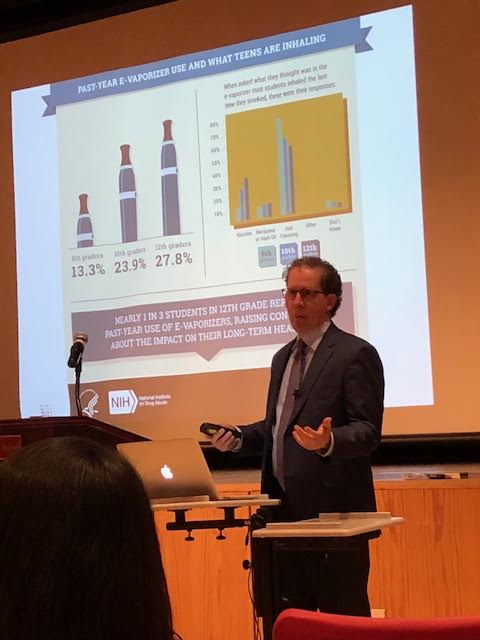 No doubt, you've heard stories about teens vaping at school or at parties, and you've seen recent headlines like "JUUL Leading To More Teens Vaping At School," "E-Cigarettes: A Shiny Alternative To Smoking," and "Vaping Is The New High School Epidemic." Well, this vaping "epidemic" is likely much closer to home than many think.

An ever-increasing number of teens and preteens are vaping, or smoking "e-cigarettes," each day, and its popularity is growing exponentially. It's believed that over a quarter of all middle school students and three quarters of high school students have tried e-cigarettes. In fact, when recently studying e-cigarette use among teens, the National Institute on Drug Abuse didn't bother asking whether they were vaping; it asked what they were vaping.

And, now, parents and school administrators are playing catch up, trying to learn more about e-cigarettes and how they can affect children's health. To provide some guidance, last week, the Scarsdale School District hosted "Vaping, E-Cigs and the Health of Our Youth," a presentation by Dr. Richard Stumacher, chief of pulmonary and critical care at Northern Westchester Hospital, and a smoking cessation expert.

"There's a lot of media, there's a lot of imagery... that are trying to grab your attention and (say) that vaping is not smoking, that vaping is not poison..." Stumacher began, as he showed the audience various advertisements. But, he finished with one alternative message that illustrated his point of view: a depiction of e-cigarettes as "the next generation cigarette for the next generation addict."

Stumacher's main concern is nicotine addiction in adolescents and teens. A powerful, mood-altering substance, nicotine quickly affects the brain, causing a release of dopamine, which results in a feeling of pleasure and calm. After about 20 minutes, the feeling begins to dissipate, often leading a smoker to continue cigarette use throughout the day. "Nicotine affects the area in the brain that governs judgment and decision-making; that is the last part of the brain to develop," he said. "It disrupts growth of brain circuits that control attention, learning and susceptibility to addiction, and increases the risk of psychiatric disorders, cognitive impairment and attention deficit."

Stumacher explained that it's easier to convince teens about the dangers of smoking conventional cigarettes since there's indisputable evidence about exposure to carcinogens, and links to lung and heart disease. However, the medical community is actually divided over the effects of e-cigarettes. In short, "there are people who are pro and anti-vaping; insufficient literature and medical research; and, as of yet, no evidence of disease directly caused by vaping," he said.

So, Stumacher took the opportunity to present what is known about the risks of e-cigarette use. There are some 42 chemicals present in e-cigarettes, 19 of which that are especially harmful. And, of over 51 brands tested, 92 percent contained at least one of these harmful substances. Besides nicotine, quite a few of them, like diacetyl, are used as flavoring. "While many of the people who are pro-vaping will say that the chemicals are safe for food consumption... my perspective is that while it may be safe to go into your stomach, it may not be safe to go in your lungs," he said.

This, along with the fact that e-cigarette use is strongly associated with future cigarette use, led Stumacher to advise, "The question is not whether vaping is safe; the real question is should we allow our youth to vape, and the answer is clearly no."

He continued by explaining different vaping delivery methods and "e-juices." "What are our kids using? They're using JUUL devices, which are like the iPhones of vaping," he said. All JUUL pods (cartridges that hold vaping liquid or 'e-juice') contain nicotine; there are no 'just flavoring' versions. One JUULpod is the equivalent of approximately 200 puffs, or one pack of cigarettes.

Most teens cite availability of "appealing flavors" as the primary reason to begin vaping. Countless e-juice flavors are available, ranging from vanilla custard, blueberry, cookie milk, and peanut butter and jelly, to menthol and traditional tobacco, with varying levels of nicotine strengths. "This is clearly aimed at our children," Stumacher said. "Non-nicotine flavored vaping liquate is a gross and obvious gateway product aimed at youth to enter the nicotine addiction marketplace... It's already a $5 billion industry; there is a significant amount of money to be made in turning your child into a nicotine addict."

He then passed around samples of JUULs and showed how vaping devices can vary in size and appearance. They can look like pens or conventional cigarettes, and so-called "mods" can be changed and personalized. Many teens begin with a JUUL "starter kit," which costs about $50.00. The kits contain USB ports and easily can be charged discreetly at home or school. JUUL pods are sold typically in packs of four, at a cost of $20, making them much cheaper than a $15 pack of cigarettes.

Advice for Parents
"Stopping your child (from vaping) will prevent him or her from becoming enslaved by nicotine, which is the most addictive substance known to mankind," Stumacher said. He warned that increased vaping among youth will lead to devastating health issues in the decades to come. "We're going to see a tsunami of lung cancer and emphysema, heart disease, diabetes, etc., etc."

He then changed gears and provided parents with advice. "Alright, it's really not that bad; the kids aren't bad. They just don't know; they're not informed," he said, while urging parents to be patient and begin honest discussions with their teens. "Rather than yell at them or accuse them, just have conversations – frequent, small conversations. Your children are not going to, all of a sudden, decide they're not going to vape, especially if they're vaping nicotine."

Stumacher stressed that parents need to educate themselves, and begin open dialogues with children, not lecture them. He suggested beginning with a conversation in the car: "Your kid isn't looking you in the eye and there will be an end to the talk... " as opposed to a discussion at home that may go on and on, leading your child to tune out. Other tips include setting a positive example by being tobacco-free, preparing for questions that your teen may have about the health effects of vaping, and finding the right moment to discuss the issue, perhaps when seeing someone use an e-cigarette.

Another tactic is to simply prove the power of addiction. "None of the kids who vape want to go on to smoking. They think it's disgusting," Stumacher said. "If you think (your child) is a nicotine addict, suggest he or she go longer without vaping, and see how it feels. When kids feel the symptoms of withdrawal, they may realize they're addicted (and be willing to stop)."

To learn more about e-cigarettes and how to talk to your child about vaping, visit The National Academies Website here or the Surgeon General Website here. To see a recording of Dr. Sturmacher's presentation, visit the school district website here.

Laura Halligan, a new contributor to scarsdale10583.com, is a local writer, editor and marketing consultant. She is principal of Pinch Hit Prose and provides communications services to entrepreneurs, small businesses and nonprofits.