Albeit relatively brief, Tuesday’s Village Board of Trustees meeting offered residents a good amount of information about where Scarsdale is headed in the coming months.

“One of the Best” Budget Processes

A day after the latest village budget work session, Trustee Justin Arest provided an update on the planning process, describing it as “one of the best conducted, with greater detail, better analysis, and with a very healthy combination of dialogue and debate among trustees and staff.” The draft village budget for 2020-21 translates into a tax levy increase of 1.986%, or $129 for the average Scarsdale property owner. The property tax cap for the village is 4.84%, or a $1.9 million total increase over last year.

In discussing the village’s efforts to balance needs with cost, Arest said that the first pass of the budget represented a $1,004,330 million or 2.437% increase, and the village has continued to reduce the tax increase after two additional reviews.

“Despite some difficult burdens, including, but not limited to, mandatory personnel compensation and increases, smart planning, some fortuitous additional revenue, and reduced expenses, we’ve been able to produce a budget that is sensitive to pressures faced by our residents without a reduction in services, and… also includes a very aggressive capital plan,” he reported.

The proposed capital plan addresses Scarsdale’s aging infrastructure, while focusing on public safety and quality of life. Village staff have allocated funds to ensure that capital projects are planned appropriately and collaboratively, with input from staff and community, particularly important in light of the ongoing Freightway process. Arest stressed the importance of careful consideration of future “build-once opportunities,” stating, “Whatever we build must be better than what we’re replacing and suit our needs for decades to come.”

Mayor Marc Samwick followed by saying, “As is typical of budget discussions, our deliberations focused on balancing different choices and priorities. It is also important to note that a guiding principal for our work is to propose a budget that, to the greatest extent practical, serves the village as a whole.” He then thanked residents who have participated in budget work sessions to date and invited the public to participate in future meetings – the operating budget briefing session will be held at village hall on Thursday, February 27 at 7:00 pm, and the capital budget session will be held at village hall on Wednesday, March 4 at 7:00 pm.

In speaking about a contested election Tuesday, Berg stated, “It makes it more interesting and involves the residents more in our democratic process, so that’s always good.”

As it was two years ago, the VCP’s primary platform is to provide residents with an alternative to Scarsdale’s traditional single party process. According to the group, “Residents of Scarsdale deserve a choice of candidates for their important elected village officers. These VCP candidates are each exceptionally qualified and committed to provide common sense, workable solutions to the village’s pressing problems, while preserving its character as a village of single family homes.”

Scarsdale Pledges to be Climate Smart 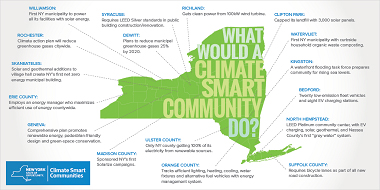 Addressing another topic of interest to residents, the trustees unanimously passed a resolution to become a New York State Climate Smart Community (CSC), working to reduce greenhouse gas emissions and adapt to a changing climate. Trustee Lena Crandall presented the resolution, stating, “The Board of Trustees believes that climate change poses a real and increasing threat, exhibiting the potential for significant harmful disruption to natural and human systems, including environmental, social, and economic impacts… sustainability and resilience themes are woven into the rich tapestry of our community, and our municipal operations and infrastructure increasingly reflect our collective consciousness in that regard.”

As a CSC, Scarsdale has pledged to incorporate 10 elements in future planning and policy making, including:

While these actions lead to obvious positive environmental change, they also are expected to present other benefits such as:

The next step is to register with New York State to be designated as a Registered CSC, and then establish a CSC task force, which will advise and collaborate with village staff to develop plans, programs, and activities connected with the CSC

The Mayor noted that the official Freightway public comment period closed this past Sunday, but the administration continues to welcome residents’ feedback and input. “The board is listening to the community and we share the community’s focus on school and fiscal impacts,” he said. “As we have said and it is worth repeating, the board will not support a project that does not have a positive economic benefit to the village and the school district, or a project that would harm the quality of education that our children receive.”

Once assembled and reviewed by village staff, all comments submitted to the village will be made public.

Ed Morgan, representing the Scarsdale Arts Council, announced that an art fair will come to the village this summer. After almost two years of planning, the council will host the Scarsdale Summer Art Festival 2020 from mid-July through the first part of August.

The festival will feature a high-quality, juried art show, an exhibition of student art, and a variety of other events to be announced shortly. Local artists, as well as those from surrounding counties and states, will be invited to submit proposals for works in a variety of media to be showcased via a special prospectus that also will be distributed widely in the community.

The Scarsdale Public Library and Department of Parks, Recreation and Conservation staff, with the assistance of the Friends of the Scarsdale Parks, will assemble, install, and maintain the “Little Free Library” kiosks at Brite Avenue Park, Crossway Field, Hyatt Park, Chase Park, and Harwood Park/Library Pond. The kiosks, promoted by local Scarsdale student Danielle Kohn, will be similar to those offered by many municipalities throughout the country and Westchester County, and are believed to foster a sense of community and beautify surroundings.