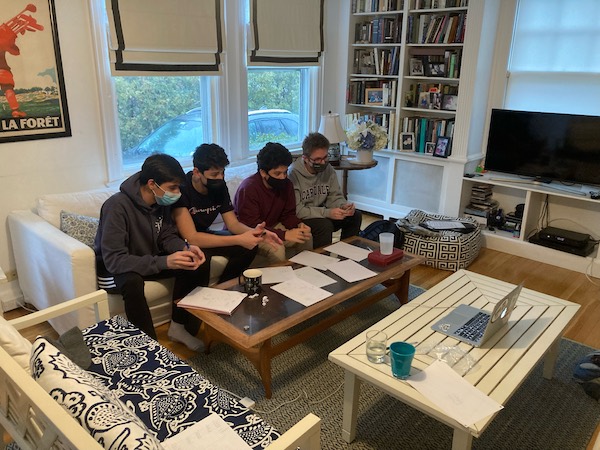 Question 2: What is the name of the 77th element on the periodic table, named after the Greek word for “rainbow.”

These are just a few of the questions the SHS Quiz Bowl answered correctly in their journey to the national tournament. (You can find the answers at the bottom of this article)

When many high schoolers think of “competitive matches,” sports are the first thing that comes to mind. However, the jubilation of a last-second winner or monumental comeback is just as strong – if not stronger – in a Quiz Bowl contest.

Quiz Bowl is not simply “glorified Jeopardy” as some make it out to be. It is not a place to go and answer easy questions about what the fourth planet from the sun is or what the capital of France is. Quiz Bowl is a true battle of the wits: teams of four (with two additional substitutes) partake in four unique rounds – the warm-up round, the bonus round, the 70 second round, and the stump the experts round. Even in the first round, the questions are of a difficulty most would not expect the average high schooler to know.

The limitations imposed by COVID have not prevented the SHS Quiz Bowl team from being as strong as ever despite needing to undergo a rebuilding phase due to the graduation of most participants over the past two seasons. There is a strong senior crop of talent soon to graduate from the team, but the team is being left in good hands with the current juniors and underclassmen.

Club president Ned Kronenberg has been a member of the team for the past four years and is rightfully proud of the team’s evolution, describing, “When I joined as a freshman, the club was mostly comprised of upperclassmen, and the team was usually very successful at tournaments. As those upperclassmen graduated, the club began to shrink and we lost much of our former success. Then, the pandemic hit, which hindered our ability to meet, compete, and recruit new members.

“I think Quiz Bowl has grown immensely in learning how to deal with these hardships and persevering to create a better club for all of its members. Additionally, the club’s membership has slowly been rebuilt, which now features a healthy number of members from every grade level.”

Kronenberg is enthusiastic about the 2021/22 Quiz Bowl team’s performance thus far, stating the team has been off to a “strong start.” If his statement is not accurate, it is because it is an understatement: having performed well in all competitions so far this season, they also emerged victorious in the prestigious Westchester Academic Challenge and Knowledge Organization (WACKO) Regional Tournament (WACKO administers all the tournaments the SHS team partakes in besides National Tournaments).

There is plenty of excitement about what the second half of the season will bring in a team which Kronenberg says that there is “a healthy membership of both talented and enthusiastic students.”

Tournaments are still taking place virtually, but there is hope that in-person competition can resume by the year’s end. However, the SHS team still competes together, though their oppositions and proctors are on Zoom. Weekly after-school practices are also in-person, with a meeting consisting of an entire Quiz Bowl question packet being reviewed and answered in a no-stress, fun environment. The tight-knit bond maintained in the team is pivotal in performing well when cooperation is needed most, a characteristic of the team that will only further help them as the season progresses.

Kronenberg’s goal for the second half of the season is “to put up strong performances in our tournaments while preserving integrity and sportsmanship and of course, having fun. We’re also looking forward to participating in a national tournament in the spring.”

There is much to look forward to in the second half of this season, including the national tournament for which qualification has already been achieved. The tournaments can last up to five hours, but time flies when the mind is challenged in this unique, competitive nature. For current and future high schoolers alike, keep an eye on the Quiz Bowl team, for if you have an eye for trivia or just want to show off some knowledge, joining the team – the community – is perfect for you.

Stumped by the questions above: Here are the answers: