From start to finish, the college process is filled with making decisions. In the beginning, there are decisions about high school course selections, extracurricular activity choices, standardized test options, and particular schools that comprise an individualized college list.

When admissions notices are finally sent, there are, hopefully, many choices and the most important decisions left to make. This may be a good time to revisit those schools at the top of the list. Considerations such as campus setting, fields of study offered, distance from home, and even the weather, should be weighed again now that final possibilities must be narrowed down.

Wait-list and deferral options are perhaps the most challenging decisions with which to grapple. A student who is still certain about his or her first choice school should respond quickly to that college with a note confirming continued interest. New information available since the application was submitted, such as additional grades or accomplishments, should be forwarded to the college as enhancements to the original application. Waiting for final decisions to be made can seem endless and may even prove disappointing in the end. On the other hand, the time spent to methodically review options may be the best path to a favorite school. In retrospect, the time will seem fleeting.

In reality, there are many schools where students would be happy and the percentage of students ultimately pleased with their final selections is high. Keeping an open mind and demonstrating patience will lead to four rewarding and exciting years ahead.

Collegistics LLC provides comprehensive services to students and parents who are embarking on, or in the midst of, the college application process. Providing families the benefit of seven advisors, Collegistics uses a team approach, offering the kind of practical and emotional support that results in an informed and less stressful college application experience. If you have any questions about the college process you would like to see addressed in future issues, email info@collegistics.com or call (914)722-6050.  Please visit our website at www.collegistics.com for further information.

The Gorges of Cornell University

Perhaps you have heard about the latest round of deaths at Cornell University. Unfortunately this year’s string of deaths are only the latest in a long tradition of suicides in Ithaca. Rob Fishman, a 2004 graduate of Scarsdale High School and a 2008 Cornell University graduate began to look into this Cornell phenomenon when he was a student at the Columbia Journalism School last year. Prompted by the reports of the three latest jumps at his Alma Mater, Rob has written this history of Cornell, the bridges and the unfortunate deaths. Now an employee at the Huffington Post, Rob first published the story there, and you can read the entire piece by clicking on the link at the end of this introductory section to the article.

It was hardly the weather for a suicide. Students had gathered at Collegetown Bagels — a popular watering hole on days like October 8, 2008, when the Ithaca sun makes an unseasonable appearance — and from the outdoor patio, you could make out the lofty spire of McGraw Tower, poised now to chime two o'clock. At one minute before the hour, a pair of students crossed the stone bridge to class, the college town behind them, Cornell University ahead, and the deep gorge ninety feet below.

Across the street, an elderly woman was coming the other way. A lanky man in a navy track jacket walked briskly a few paces behind, his face obscured by a white cap. Back in town, a sophomore was feeding a parking meter, when she saw something from the corner of her eye. The man had stepped onto the bridge's western parapet. "I can't look!" someone ahead exclaimed. Up on the bridge, the older woman turned to find anyone who had just seen what she'd seen.

By the time the dean of students, Kent Hubbell, arrived, a small crowd had gathered around the bridge. One man walking through the gorges had his camera handy, and snapped four pictures of the body, which, within thirty minutes or so, was removed by emergency workers. Soon the crowd cleared, and an hour later, the bridge reopened for traffic. "Life went on," remembered Hubbell. "It's amazing how quickly." As for the two witnesses on the bridge, they didn't even wait around to see what happened. "As soon as we heard someone calling 911," said one, "my friend and I continued to campus."

If people in Ithaca seem inured to suicide, that's because they are. For as long as anyone can remember, Cornell's gorges have furnished a wide open casket for those so inclined, and Ithaca, in turn, earned the unwanted distinction of "suicide capital of the combined Ivy League, Big Ten, Little Three, and Seven Sisters," as one local writer put it. Although commensurate with national averages, suicide at Cornell — or to borrow the local vernacular, "gorging out" — has become the stuff of myth. And sometimes reality, as this month, when the university lost three students — in February, Bradley Ginsburg, 18; three weeks later, William Sinclair, 19; and the very next day, Matthew Zika, 21 — in as many weeks to its precipitous gorges. The recent spate of suicides has cast a pall over the campus. "The cumulative effect of this loss of life is palpable in our community," said Susan H. Murphy, the university's vice president for student and academic affairs, in a video address. University staff, Murphy said, were knocking on student doors, and even stationed on the campus bridges.

But if suicide, as the adage goes, is a permanent solution to a temporary problem, then confronting suicide is just the opposite. While the problem abides, the solutions — and the attention these tragedies occasion — inevitably wear thin. Thus, in the fall of 2008, the suicide of Jakub J. Janecka. That day, when police asked the university if Janecka, 33, was an enrolled student, they were told no, but that he was an alumnus, now ten years past his date of graduation. From the small town of Honesdale, Pa., Janecka had recently completed graduate studies in Washington D.C. But what brought him to Ithaca, if not the end he found, no one was quite sure. And why Janecka — or, for that matter, any of the young men — came to the gorges to meet that end is a question best answered from the beginning.

SAT or ACT…that is the question.

Every college-bound high school student is, at one point or another, faced with this conundrum. Do I take the SAT or the ACT? If I take the ACT, should I take it with Writing? Will I need to take SAT Subject Tests if I take the ACT? And the answer is maybe, perhaps, it depends.

Just as there is no definitive answer to Shakespeare’s famous query, so there is no cut and dried response to this question. First and foremost, do your research. Today most, if not all, colleges that require standardized tests for admission accept either the SAT or the ACT, without preference. So, first check the schools’ websites to confirm, and then the choice is yours. Be aware, however, that many schools that accept the ACT require the optional Writing section, and plan accordingly. Further, determine whether the schools in question will still require specific SAT Subject Tests if you submit the ACT. Many colleges will accept the ACT in lieu of their required Subject Tests, but others still require them. The next step is to look at the tests themselves. The test format and material covered is different. The SAT (3 hours 45 minutes) covers Critical Reading, Math and Writing (including grammar and a written essay), while the ACT (2 hours 55 minutes) includes English, Math, Reading and Science and an optional Writing segment (30 additional minutes). As a general statement, the ACT is curriculum-based, while the SAT is aimed more at general reasoning and problem-solving skills. Often, students find that the format and specific subject matter of one type of test works better for them than the other. Review the prep books, take some practice tests, and see which exam affords you the opportunity to best display your academic abilities.

Collegistics provides comprehensive services to students and parents who are embarking on, or in the midst of, the college application process. Providing families the benefit of seven advisors, Collegistics uses a team approach, offering the kind of practical and emotional support that results in an informed and less stressful college application experience. If you have any questions about the college process you would like to see addressed in future issues, email: info@collegistics.com or call: (914) 722-6050. Please visit our website at www.collegistics.com for further information.

QUESTION: Tests, tests, tests. When should my child take the SAT or ACT

ANSWER: Well, the simple answer is, when they are ready. But we all know that the simple answer is not always the best answer, so what should be considered in planning for standardized tests?. First, bear in mind their schedule. Does she play a sport or have major time commitments at some particular point during the year?. Individual schedules should be considered when planning a testing schedule. Your child should have sufficient time to prepare and focus. Second, can your child handle standardized tests at the same time as high school final exams?. If not, she might want to consider taking exams for the first time in the earlier spring, before the June rush, using the fall test dates senior year as options for retake opportunities. Third, will your child need to take SAT Subject Tests?. Factoring Subject Tests into the schedule may also dictate when it is optimal to take the SAT or the ACT. Students cannot sit for the SAT and SAT Subject Tests on the same test date. Finally, go back and ask yourself the initial question, when will my child be ready?. When will she be sufficiently prepared to give the exam her best effort?. This raises an even more preliminary question. When should your child begin to prepare for these tests? That too, depends. Will she take a classroom-type course, be tutored privately or study on her own using the many test prep books available?. Most courses for spring test dates begin in January, whereas students tutored privately may have more flexibility in their preparation process. These decisions, like most associated with the college application process, should always be made based on your individual child’s needs and best interests.

Collegistics LLC provides comprehensive services to students and parents who are embarking on, or in the midst of, the college application process. Providing families the benefit of seven advisors, Collegistics uses a team approach, offering the kind of practical and emotional support that results in an informed and less stressful college application experience. If you have any questions about the college process you would like to see addressed in future issues, email: info@collegistics.com or call: (914) 722-6050. Please visit our website at www.collegistics.com for further information. 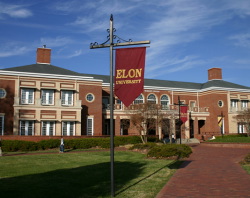 The Daily Beast has published a list of 15 colleges that rose up in the rankings of “Hot Colleges” and have transformed themselves in the past 10 years.  Though it’s difficult to discern the criteria for their rankings, as “first-choice” schools, it’s nice to see what they consider to be “hot” and learn more about colleges that many not have been on your list.

Check out this gallery of what's hot on the Daily Beast: