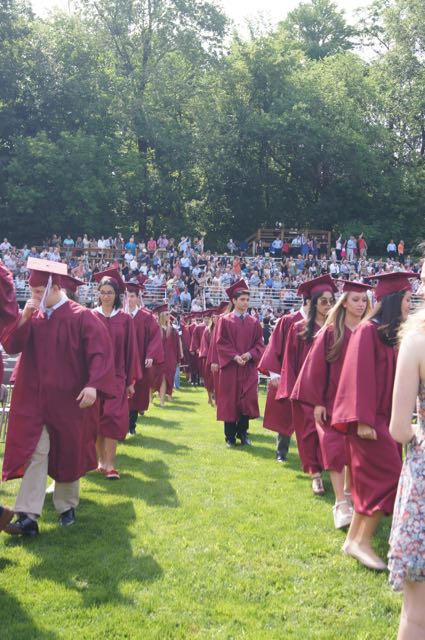 Most high schools offer Advanced Placement courses that are effectively year-long preparations for the AP exams, administered by the College Board, which can help students place out of introductory classes in college depending on their test performances. Scarsdale offers Advanced Topics (AT courses), which are similar lto AP courses in rigor, but tend to go more in-depth and encourage critical thinking beyond the standard fact-based AP curriculum. Not all AT classes directly prepare students for AP examinations at the end of the year.

SHS Principal Ken Bonamo clarified the current relationship between the AT and AP program saying, “There was a requirement…which said teachers had to prepare their students for AP courses, whether it be during classes or via review sessions during senior options.”

The Tri-State Consortium, an organization of over 50 schools in our area was invited by Scarsdale to evaluate and provide feedback on the progress of the AT curriculum.

The AT programs replaced AP programs in Scarsdale in the 2007-2008 school year. There was virtually unanimous support from the high school faculty at the time in favor of AT programs – a notion still widely shared – as AP courses were often considered too restrictive and it was a challenge to cram in the material for the sole purpose of test preparation in May. Superintendent Michael McGill said the shift “will better prepare our students for college study,” including improving research and writing skills, analyzing, evaluating, and judging subject content as opposed to just accepting the facts.

At the time, Principal John Klemme explained, “students will enjoy a level of distinction as a result of the faculty initiative to refine courses for depth of understanding, a fact confirmed by the enthusiastic support of college admissions officers.” This too remains the consensus today among administrators and the vast majority of Scarsdale High School graduates surveyed.

The 20-page report, which was discussed in detail at the 4/25/2022 Board of Education Business Meeting, discussed a series of key indicators in evaluating the success, and continued necessity, of the school’s AT program. The three following questions were the focal points of the report:

For the most part, the answers to the questions were resoundingly positive. There were some recommendations and concerns, but the reported found the AT program was meeting its objectives.

The report concludes there are indeed clear expectations for success in AT courses, with college admissions staff viewing the program with high regard. New AT courses are designed with input from experts in the fields, typically professors from notable universities. The report suggests the high school should annually address concerns to parents about how the deviation from standard AP programs can be beneficial.

In terms of creative thinking, creativity, and deep learning, the report sees the program as a positive, transformative, and authentic success. The report explains, “One staff member with whom we spoke said, ‘Advanced Placement courses are a promise to students – we will do all we can to help you excel on the AP exam…AT courses also are a promise – we will teach you to think like a person in the discipline.’”

The switch from AP to AT programs in the 2007-2008 school year has not led to any notable change in acceptance rate/viability for college applicants. The Scarsdale AT courses align with freshman college courses. The report states how “students and alumni [said] that AT courses expose them to a ‘philosophy of problem-solving,’” potentially a huge advantage when considering post-secondary education preparation.

Alumni from the classes of 2014, 2016 and 2018 were surveyed and 100 students responded. Overall, they responded positively about the AT Program.

How important it was that their AT courses prepared them for corresponding AP exams:

41% indicated it was very important, 39% said it was somewhat important, and 21% said that it was unimportant.

How well AT courses prepared them for their college introductory courses:

How they perceived their preparation for college compared to their college classmates who had taken AP courses:

Overall, the Tri-State Consortium found that some of the AT assessment forms were conducive to the AT vision, promoting student-driven, creative, innovative work. However, as mentioned, some courses still run closely – and perhaps too closely – to that of a typical AP course. The lack of interdisciplinary work is also something that could be reevaluated in the near future. Nonetheless, the AT program is viewed as successful.

When the findings of the report were presented to the Scarsdale Board of Education, some questions were raised.

The first centered around whether Diversity, Equity, and Inclusion goals were considered in the evaluation of the AT courses, to which Bonamo admitted it was not a factor actively considered during the survey. When the suggestion of having both AP and AT programs was brought up, Bonamo mentioned how having both programs on offer could be problematic for both students and admissions officers. He also mentioned how the report’s findings are for a long-term view, and that no huge differences will be observable immediately as a result.

Even with the report indicating the AT program has been successful, some had questions. The shift away from the AP curriculum has posed issues for students preparing for the AP tests. In addition, Scarsdale’s rankings have fallen. US News and World Report uses the percentage of people taking/passing AP tests when rating high schools. So even though Scarsdale is often considered one of the best, if not the best, high school in the state, it ranks as 61st best high school in New York in their rankings due to the relative lack of AP participation/success as a percentage of student participation/success rate.

In the question-and-answer session, Principal Bonamo responded to questions concerning the AP success rate at Scarsdale. Some suggested that not teaching to the AP exams could lead to a disadvantage for students in the future: if they are unable to place out of classes in college because they were not amply prepared for their AP exams, this could lead to a potential disadvantage during freshman year. Also, if students do well in enough AP exams, they may be able to finish college in 3.5 years instead of 4 years, potentially saving families tens of thousands of dollars in tuition. Is Scarsdale’s AT program causing students to pay more for college?

Most other schools in Westchester offer plenty of AP programs before senior year, whereas the majority of Scarsdale’s AT programs come in senior year. Some parents believe the AT program makes it more difficult for students to get a head start on AP examinations; not only do their classes not teach to the test; there also are not many classes prior to senior year which prepare students for AP exams. In an era where SAT Subject Tests are obsolete in the admissions process, some parents wonder whether offering typical AP programs – and more before senior year – could help students in the admissions process show their proficiency in certain subjects. Some fear that Scarsdale students may be less viable applicants when other schools have more AP test participation and students are better prepared for specialized tests.

Even though the report concluded heavily in favor of the continuation of the AT program there is still some backlash against the AT program’s viability through numerous lenses. If the report is to be believed it showed there is always room to improve, but that the unique AT program has greatly assisted students for many years after high-school graduation. External pressures may cause Scarsdale to reevaluate the program’s viability, so the AP versus AT debate is not going anywhere.