Residents Plead to Save 76 Birchall Drive 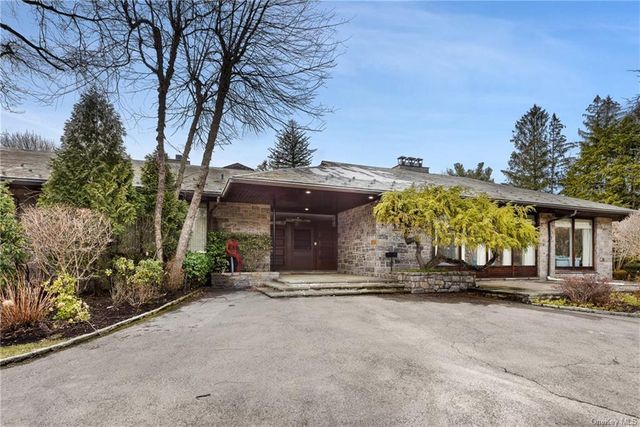 In a sign of a change in attitude about preservation of homes in Scarsdale, a persuasive, prepared and eloquent group of Murray Hill residents attended the July 19 meeting of the Committee for Historic Preservation to defend the mid-century modern former home of Paul and Irma Milstien at 76 Birchall Drive. Lawyers for the family had submitted an application to tear it down, and were working with a builder with plans to subdivide the property and construct two homes in its place.

This was the second meeting that an application by the Milstein’s family lawyer to demolish the house was considered. After considerable discussion on June 28, 2022, with only four committee members present, the decision was held over until July 19. 2022.

The neighbors at the meeting were undeterred by the opinion of expert Andrew Dolkart who believed that the home did not meet the criteria for preservation. Instead, they presented evidence to demonstrate that the home did meet one, if not several of the criteria, as outlined in Village Code.

Speaking for the family, Andrew Berkman, a lawyer for the family contended that the architect who designed the home, Simon B. Zelnik was not a master, that the home was not mentioned in the 2012 Cultural Resources Survey and that alterations made to the home following a fire had undermined the integrity of the design so that its historic significance was lost.

Polled at the beginning of the meeting, the committee chair and several members of the committee agreed with Berkman. Chair Adam Lindenbaum said, “It is a tremendous house on a tremendous property but that does not mean it warrants preservation.”

Kevin Reed agreed, saying, “It’s a nice house. If I had the power of fiat I would order it preserved but we have to go by what the trustees would say – rather than our hearts.”

Mark Behr commented about the other Zelnik homes in Scarsdale. He said, “ The sad thing is that one of Zelniks house burned, we approved another to be taken down and now this – but it doesn’t elevate it to meet the code for preservation. I am leaning toward supporting the application.”

Jonathan Lerner said, “I lean the same way myself. But do we want to at least discuss the importance of the residents? In regard to criteria 1 and 2.?”

Talaiya Safdar refuted the claim that Zelnik was not a master. She said, “He was a noted architect. What does an architect need to achieve to be considered a master?” 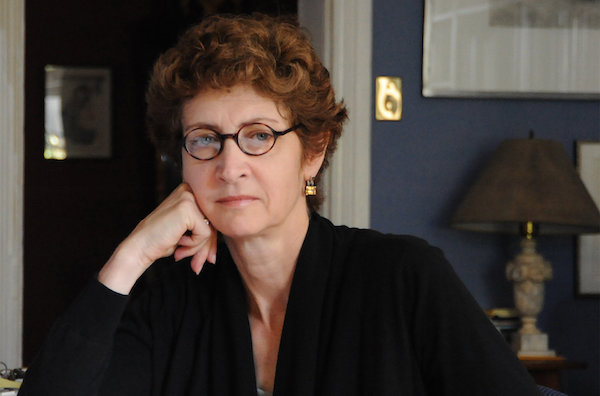 Dr. Emily T. Cooperman an Architectural Historian from Cherry Hill, NJ sees little worthy of preservation in Scarsdale.Dr. Emily T. Cooperman, an expert from Cherry Hill, NJ who was retained by the attorney’s said, “the alterations had changed the historic value of the home.” Cooperman has been hired several times before to testify on behalf of applicants who wish to raze historic homes. To date she has found little, if anything, worth preserving in Scarsdale. See her opinion of the property here.

Committee member Safdar replied, “It’s a slippery slope to say if the house has been altered it is no longer historic.”

However after the public was given the opportunity to speak, the tone of the conversation changed.

Gayle Helman of 62 Birchall Drive first spoke about the prominence of the homeowners, one of the criteria for preservation. She said, “I want to speak to the point that the home is associated with someone of significance. The first owner, Ruth Farkas, was the Ambassador to Luxembourg and her husband owned Alexander’s Department Stores. Paul and Irma Milstein are some of the most prominent and philanthropic families in New York who donated the Division of United States History, Local History and Genealogy Collections to the NY Public Library, the Milstein Hospital at Columbia, the Whale Room at the Museum of Natural History and more. She said, “There are few if any families that have left a mark like this on New York.”

About architect Simon B. Zelnik she listed many of his buildings including the Joyce Theater a series of movie theaters and an important synagogue in Riverdale. She said, “What would make you a master if not that?”

A newcomer to Scarsdale, David Greenberger said, “We moved to Scarsdale from the city a year ago and one of the reasons why we chose Birchall Drive was the beautiful homes, including this one that is diagonally the street from us. If any house would meet the criteria for preservation it would be this one.”

Greenberger said, “Simon B. Zelnik was a master.” Greenberger shared a historic caricature from the New York Post picturing the top five architects of the day, with Zelnik next to Frank Lloyd Wright. Greenberger, who is an attorney, said, “That would be like putting me next to Chief Justice John Roberts.”

He contended that the home met another criteria, in that it “represents a type, period or technique with high artistic value,” saying “It is a beautiful home in the mid-century modern aesthetic. That is exactly what a mid-century modern home should look like. The wood and stone façade is emblematic of an era.”

About claims that the renovation made it lose its integrity, he said, “The White House was both burned and expanded.”

He then introduced a surprise visitor to the proceedings, Bryan Zelnik, an architect and grandson of Simon Zelnik. 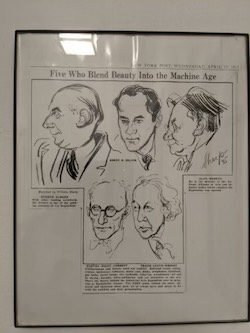 A caricature from the NY Post depicting Zelnik alongside Frank Lloyd Wright.member of the AIA. About his grandfather he said, “Yes he was a master. Simon was a fellow of the AIA. They are recognized with highest honors for significant contributions to society. Only 3% of all AIA members have that honor.”

About the senior Zelnik, he said, “He won medals at Cooper Union, attended the Ecole des Beaux Arts in France and won many honors.” He said, “My grandfather was a true modernist for his time.”

He listed many of the buildings he designed, including the synagogue in Riverdale, the Baracini stores, Lindy’s restaurants and more. He said, he was considered one of the five top architects of the period.”

About the home on Richbell he said, “He used stone and wood to create the form. His work is in keeping with the Prairie style and it has been maintained and remains intact.” He reminded the committee, “In the city a landmark is only the façade.” He said, “My grandfather was a true American success story. He came here from Poland and as immigrant.” His emotional appeal was moving.

Neighbor and interior designer Jackie Cutler also spoke to preserve the home. She said, “There are few mid-century homes left in Scarsdale and this is a fine example of mid-century modern architecture.” She listed the large windows, the small steps between rooms, the expanse of rooms and said, “this is a mid-century jewel.”

Later at the meeting it was revealed that the fire in the house was limited to the attic and did not damage the design of the house. The additions were to the sides and rear and had no impact on the façade.

More comments were heard from Lika Levi and Ariel Stillman, all in support of saving the house.

However this was not enough for some members of the committee, who appear to lean heavily toward approving demolitions rather than preserving homes.

Chair Adam Lindenbaum was reluctant to deny the application and sought to discredit the claims that it met any of the criteria. He concluded, “I don’t think the Milsteins are significant. I think the renovations are substantial and I don’t think the home rises to rare artistic value.” He
questioned whether Zelnik’s status as a fellow of the AIA qualified him as a master and asked for further documentation. Kevin Reed agreed and suggested the decision be deferred.

Both Bender and Safar said they were ready to vote at this meeting and seemed convinced that Zelnick was indeed a master but agreed to put this off for another month.

Jonathan Lerner said, “I disagree with your point about the Milsteins – they are among the top 100 families in the US. They also made a lot of donations to Scarsdale anonymously.”

The committee agreed to give this further consideration at their next meeting.

So ultimately, even armed with enough evidence to meet the criteria as set forth in the Village Code and backed with the support of fellow residents, the committee lacked the fortitude to enforce the code and deny the application.

Perhaps some of the newer residents, who have only recently become aware of the struggle to preserve Scarsdale’s history, will ultimately volunteer to serve on the Committee for Historic Preservation and be willing to challenge insatiable developers who are determined to erase the past to line their pockets.