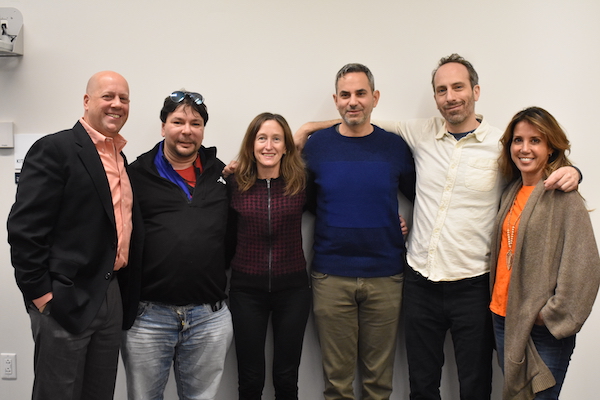 Peter Yaverbaum, Jacob Appel, Allison Weinberg, Howard Gertler, Peter Grosz and Adriana Souza from the SHS Class of 1992Though it’s been thirty years since they graduated high school, members of the SHS Class of ’92 seemed to pick up right where they left off at a panel discussion Saturday November 19, 2022 at the new Scarsdale Library, led by class member Allison Weinberg.

Introducing the panelists she noted that she has known one since birth, three since kindergarten and one since junior high school. She said, “It would be a cliché and yet also completely accurate to say that the 30 years since we graduated from SHS have flown by. And yet, somewhere along the way, we turned from kids into adults, and many of us now have kids in high school ourselves.”

Howard Gertler is an Oscar- and Emmy-nominated film producer whose most recent film, All the Beauty and the Bloodshed, is currently playing in theaters. Among his other films are Shortbus, How to Talk to Girls at Parties, Crip Camp, and How to Survive a Plague. His films have won the Gotham, the Spirit, the Golden Lion, the Sundance Audience Award, the IDA, and two Peabodies.

Peter Grosz was one of the two very funny guys in the Sonic commercials for the better part of the last twenty years. He started his comedic acting career in 7th grade, when he won the Scarsdale Junior High School Speech Contest in the “humorous anecdote” category, and went on to present a hilarious sketch about riding the school bus to the entire student body. Since then, Peter has become a prolific television writer and actor who has won multiple Emmys for his work. He has been a writer for The Colbert Report as well as The Late Show with Seth Meyer, and played a recurring role on Veep.

After a long career in the corporate world, Adriana Souza is now building a foundation to support underprivileged youth in Africa by providing them with financial support as well as access to athletic equipment, apparel, seasoned tennis coaches, and training programs. Adriana is a volunteer EMT with the Scarsdale Ambulance Corps. In addition, she worked on the “front lines” during the height of the pandemic as a COVID-19 vaccinator, administering vaccines to thousands of New Yorkers.

Although Peter Yaverbaum went to medical school after 9-11, he felt pulled in a different direction and signed on with the New York City Fire Department where has been a firefighter in Lower Manhattan for fifteen years. His current position has him driving the fire engine in the SoHo / Little Italy / Chinatown neighborhoods. He says “he is so old that he is now at the age where he can wait on the street and send the younger guys in to actually fight the fires.” During the winter, Peter is also a part-time ski instructor in Colorado.

Jacob Appel is currently a Professor of Psychiatry and Medical Education at Mount Sinai, where he also serves as Director of Ethics Education in Psychiatry, Medical Director of the Mental Health Clinic at the East Harlem Health Outreach Program, and Assistant Director of the Academy for Medicine and the Humanities. Jacob is also the author of five novels, ten short story collections, an essay collection, a mystery, a thriller, a volume of poems, and a compendium of dilemmas in medical ethics. Prior to joining Mount Sinai, Jacob taught at Brown University and Yeshiva College.

Asked about their most salient memories, Jacob Appel remembered throwing a flagpole out of a third floor window when teacher Howard Rodstein turned his back.

Peter Grosz was in a study hall with math teacher Barbara Bierbauer when he decided to demonstrate some pyrotechnics that ultimately got him suspended from school. He was carrying a can of Rite Guard and a lighter – when used together can set off the fire alarm. He sprayed some Rite Guard on his desk, lit the lighter and when the teacher returned to the room she found the desk on fire! He remembers spending some time with Mr. McDermott suspended in “the tower.” Grosz’s mom was in the audience and verified the story which seemed funnier to her now.

Asked about their favorite teachers, Souza noted Rashid Silvera, calling him “an enthusiastic and dynamic man who met every student where they were, even modifying lesson plans for students.” She said he still attends every single reunion.

Howard Gertler remembered working on Maroon with advisor Chris Douglass, a long-time head of the English Department at SHS.

Asked what advice they would give young people just starting out, Peter Yaverbaum said, “everything was because I happened to be in the right place at the right time. Keep doing things that you love – and you’’ find opportunities.”

Grosz said, “I discovered improv comedy at Northwestern – and lucked into Second City where I took classes. I tell people to go to the place where people are doing what you want to do.
Put yourself where you’re supposed to be and keep trying.”

Jacob Appel admitted, “I sent out lots of writing. I have 21,000 rejection letters. George Plimpton from the Paris Reviewed once called me and said, “You sent us a story about bird watching. We did not like it but we think it’s great that people your age are interested in bird watching.” Appel continued, “I am still waiting for my big break. I brought a bag of signed books. Does anyone know Oprah?”

Souza added, “You are going to miss 100% of the opportunities that you don’t take. If you’re too scared to be rejected, nothing will work out for you.”

Asked how growing up in Scarsdale influenced their future, panelists first joked that no one ever admits growing up in Scarsdale, saying “Westchester” instead. However, Grosz said, “There’s a lot of money here and privilege. But there’s a lot of opportunity. It’s net positive.” Souza noted the wonderful network of successful people in every field. She said, “I have never met a group who has stayed as connected with their friends as Scarsdale alumni. People work in so many industries – there’s always someone to call.

The event continued on Saturday night with a get together at the North Street Tavern in White Plains.