Michael Aloni, aka Akiva, to Star in "The Beauty Queen of Jerusalem" 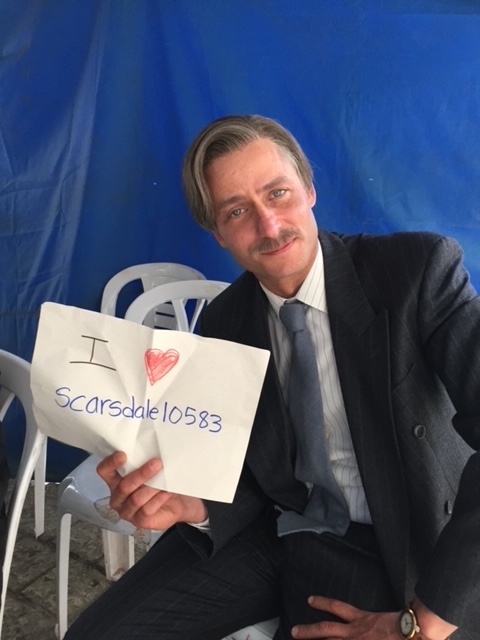 Michael Aloni on the set of The Beauty Queen of Jerusalem, Photo Credit Diana BletterWe last saw Michael Aloni at New York’s Central Synagogue where he had joined the cast of the breakout Israeli series Shtisel to discuss it with fans in the United States. Aloni who played Akiva, an ultra-orthodox young man searching for meaning and a spouse had become the heart throb of the Jewish community.

Now Aloni is filming a new series based on a best selling novel, The Beauty Queen of Jerusalem. The book takes place in the early 1900’s when Israel, then Palestine, was under Turkish rule. The article below was written by Israeli-based writer and friend of Scarsdale10583 Diana Bletter who was on the film set in Safed Israel and chatted with Aloni. It was first published in the Jerusalem Post.

Up in the hills of Safed, in a picturesque cobblestone alleyway, actors Michael Aloni and Swell Ariel Or stood together recently and hugged during the filming of The Beauty Queen of Jerusalem, a TV series based on Sarit Yishai-Levy’s best-selling novel. The story of the multi-generational Ermoza family, set in the early-mid 20th century, actually takes place in Jerusalem, but most of the series was filmed in Safed. The city’s ancient streets — without too many air conditioning units — make the vintage cars and costumes seem authentic.

It was a chilly, drizzly day, the 70th day of filming, with 10 more days to go. During a pause between sprinkles of rain, actors who play extras walked up the narrow alley in period costumes, passing the signs plastered on building walls in the old-fashioned font of the time, and a clothing store filled with vintage clothes. The series starts in 1917, at the time of the Ottoman Empire, and continues through Israel’s War of Independence. The day’s shooting was now during the British Mandate and a large British flag fluttered by a shop window.

Or, the series’ leading actress, dressed in her role as Luna Ermoza, (in her breakout role), walked up the street; her father in the series, Gavriel Ermoza, played by Aloni, (of Shtisel fame), ran after her. He showed Or a newspaper article and said, “I didn’t want you to see this when you were alone…” and then put his arms around her for a dramatic moment. 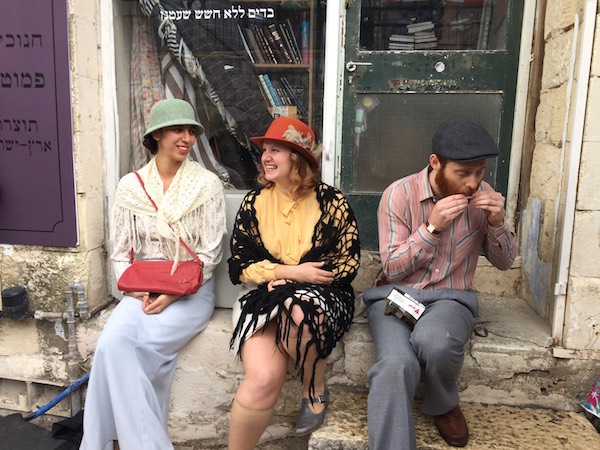 Three extras on set during a break - photo credit Diana Bletter.WELL, VIEWERS will have to wait in suspense to find out what happens until the series airs in Israel on Yes TV in early summer. There is not yet a release date for countries around the world, but Danna Stern, managing director of Yes Studios, which distributes the series, said she has “no doubt this show will be a success, and I don’t say that often.” Drama Quarterly.com just named Beauty Queen one of the top 20 shows to watch in 2021.

On the film set was Dafna Prenner, co-CEO of Artza Productions, the series’ producers. She and her partner, Shai Eines, had their eye on the novel ever since it was published in 2016 and then translated into 11 languages. Prenner said that a book that sells well in Israel might sell 10,000 copies; Levy’s novel sold 300,000, making it one of the best-selling books published in Israel in the past 20 or 30 years. The first two seasons of the series were created by Shlomo Mashiach and Ester Namdar Tamam and written by Mashiach. The series also stars Hila Saada (The Baker and the Beauty), Itzik Cohen (Fauda), and Dov Navon (Cash Register).

Prenner said that this period drama has been one of the most expensive to make in Israel. It was originally supposed to be filmed in the Ukraine but when “Corona hit,” she said, “we had to move everything to Israel,” increasing production costs another two million shekels.

There have been few shows depicting what life was like in the early 1900s, Prenner said, first in what was then Palestine and then the early days of Israel. Vintage clothes were hard to find and sometimes had to be sewn, and the makeup artist had to work hard to make sure everything from hairstyles (including metal clips) to mustaches were just right. 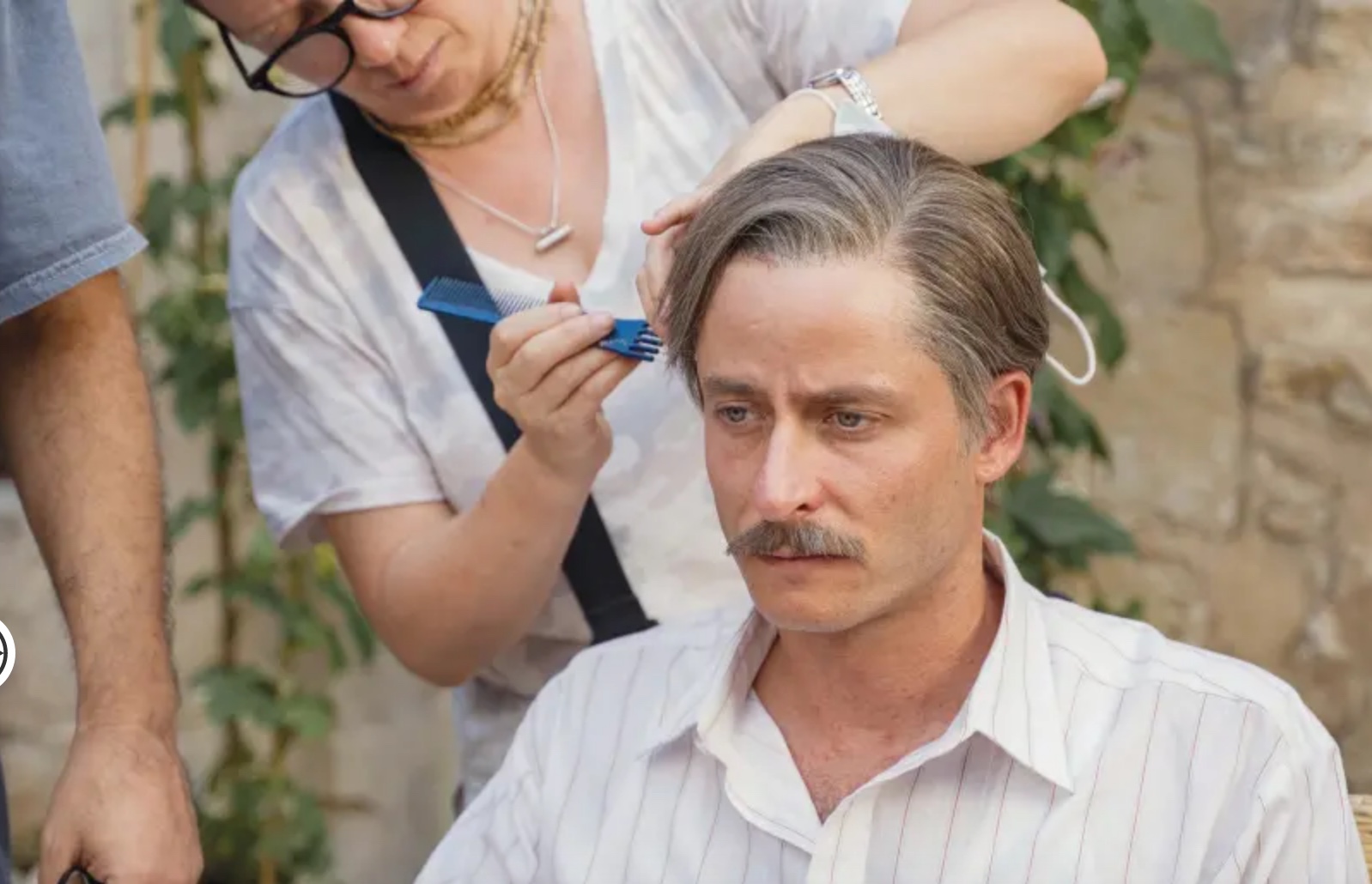 Aloni with stylist: Photo Credit Nati LeviThe Beauty Queen of Jerusalem is a story about members of a Sephardic family, also known as Spagnuolo Jews, because they made way to Jerusalem after Spain expelled the Jews in 1492. The Ermoza family speaks Spanish-Judeo, a dialect of Ladino, and because they have been in Jerusalem for so many generations, they feel superior to newer immigrants. According to Aloni, whose own family stretches back nine generations in Israel, the specificity of the story is what makes it appeal to international audiences.

“When you write something that’s very particular and seems provincial and personal, you can hit the hearts of people,” Aloni said in an exclusive interview between shooting scenes in Safed. When Aloni first started filming Shtisel he didn’t think anyone would even see it. “I never imagined it to be so successful,” he said. “Even the Arab world is watching the show. I know because I get messages from Arab viewers on my social media all the time.”

Aloni said that what makes this series so unique is that the politics and complexities of the time were so special. During Turkish rule, Jews and Arabs in Jerusalem worked together as merchants. The tensions started to increase during the British rule, Aloni said, and then the series focuses its tale on “Israel on its way to becoming a country.”

The director of the show, Oded Davidoff, “gives us freedom to be totally in character and own every moment,” Aloni said.

The show will have 22 episodes and each episode is an hour long. Prenner said that in Israel, the entire series is shot at the same time, unlike in the United States.
While the show is based on the novel, the series has its own story lines. Aloni said he feels that the book will work better as a series than a film because there is more opportunity to develop different plots and “add something new.” He said that when he first read the book, he cried for the last 70 pages.

During a break in the filming in a clothing shop, Or sat outside with her boyfriend in the series, Israel Ogalbo, better known as a star in Survivor and Big Brother. They said they were going to be sad when the shooting ended; since August, they have been working in the production along with more than 30 production crew members who circled the set offering hot tea and warm crepes on the cold day.

Aloni said the essence of the novel, as well as the series, is the story of a family. He cited Leo Tolstoy’s quote from the novel Anna Karenina, “All happy families resemble one another, each unhappy family is unhappy in its own way.”

The series follows members of the Ermoza family who, Aloni said, have been cursed to live without love.

“Family is family,” Aloni said. “Life is full of choices we make that we have to live with.” He paused for another thoughtful moment and then added, “and we carry our family’s history on our shoulders and in our hearts.”

National Jewish Book Award Nominee Diana Bletter is the author of the novel, A Remarkable Kindness (HarperCollins, August 2015). Her first book, The Invisible Thread: A Portrait of Jewish American Women, (in collaboration with prize-winning photographer Lori Grinker) was nominated for a National Jewish Book Award. Her memoir, The Mom Who Took Off On Her Motorcycle, has been featured on The Jerusalem Post and www.hairpin.com. Her latest book is Big Up Yourself: It’s About Time You Like Being You.