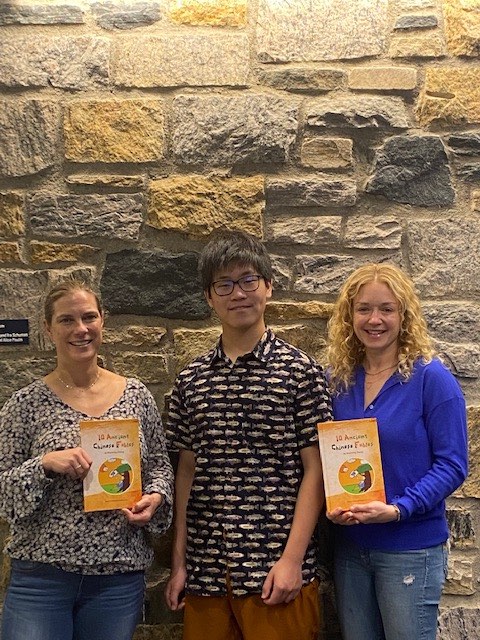 Library Director, Beth Bermel and Dara Gruenberg, President of the Friends of the Scarsdale Library with Tony (Shunming) Zhang and copies of his book. The Scarsdale Public Library now has a new addition to its growing collection highlighting Chinese culture. Tony (Shunming) Zhang, a sophomore at the Shanghai American School, donated copies of his book, 10 Ancient Chinese Fables, to the Library’s collection.

When asked to share why he decided to donate his book to the library, Tony recalled the years he spent in school here in Scarsdale. “This neighborhood nurtured me and helped me develop a strong fascination in storytelling. In particular, I loved Aesop’s fables and Greek mythology--the Iliad, the Odyssey, and the stories of the various heroes and demigods. With that said, I also realized that there were a lot of stories that my parents and grandparents told me that were different than this usual set, which is what prompted me to pursue this passion project and share the stories of my childhood with the local community.”

The fables in his book span two thousand years of cultural history and provide moral lessons for the reader. Such stories include “Frog at the Bottom of the Well,” “The Bird and the Mussel,” and the “Farmer and the Hare.” Tony’s goal is to make these tales available to strengthen cultural ties and understanding, encouraging others to appreciate Chinese culture as much as he has appreciated ours.

Dara Gruenberg, President of the Friends of the Scarsdale Library, recognized and commended his work, stating, “The Friends of the Library extends its gratitude to Tony for his generosity and commitment to our library. We are so inspired by his work to help diversify our collection and share the stories that helped shape his childhood with the broader community. We are all better off when we learn from one another and share our rich cultural identities.”

One day Tony hopes to share collections of stories like the one he has written with his own children and grandchildren. Stories that consider morality and values, and that also represent cultures around the world. “Cultural differences should not separate us from each other. Rather, we should embrace and appreciate the things that set us apart.”

Tony attended Greenacres Elementary School from 2017-2018 where he had Ms. McCarren as a teacher. He attended Scarsdale Middle School in 2020. Reflecting on this, Tony added, “The time I spent in Scarsdale schools was not long, but it certainly was the most memorable time in my life.”