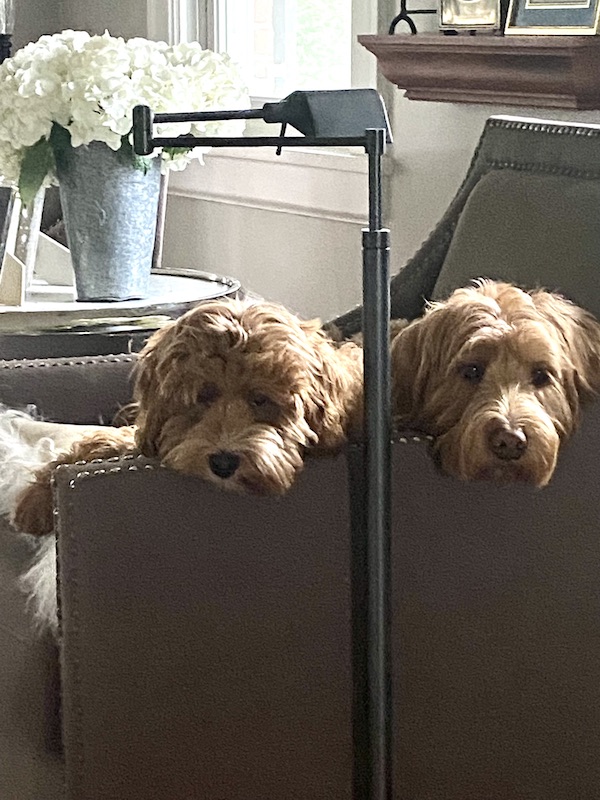 Scarsdale families understand that playdates are a wonderful opportunity for moms and dads to get to know other moms and dads while their young children make friends of their own. With the right activities and a few well-chosen snacks, everyone enjoys a fun, relaxing afternoon with friends – relationships that may last a lifetime.

But, what happens when the children go off to the Scarsdale Middle School, high school or college and moms don’t have an excuse to sit in the backyard or around the kitchen table with a their posse of friends anymore?

Sloane Worth, a Greenacres resident for 18 years and real estate agent from Houlihan Lawrence, shares that she and her friends now arrange playdates for their dogs. Instead of toddlers playing Simon Says or Tag in her backyard, Sloane’s caramel red Austrian Labradoodles, Whiskey (3-years old) and John B (still a puppy), play fetch and tug of war with their doggie pals. Supervised backyard fun allows the dogs to get the exercise and socialization they need to thrive. “I have had as many as seven dogs chasing a ball in the backyard,” says Sloane. If you don’t mind a little poop and digging, a doggie play date is a great excuse for pet owners to connect over a cup of coffee or glass of wine.

Whiskey and John B love each other as if they were littermates and can spend hours in a park or big yard with or without their neighborhood friends. Originally Labradoodles were bred as therapy dogs, so when Whiskey and John B aren’t chasing each other, they love to cuddle together in a cozy, living room chair. Sloane confides that her Muppet look-alikes on occasion have been known to get into mischief. “They crave eating paper towels and tissues. We are not quite sure how they swallow down the Charmin, but usually what they eat today comes out tomorrow,” Sloane says with a chuckle.

Sloane and her family are frequently seen walking Whiskey and John B on Kingston, Brite, and Huntington. “Walking a dog is a great way to meet your neighbors,’’ Sloane tells us. Going on she shares, “But having a doggie play date is a great way to make friends.”