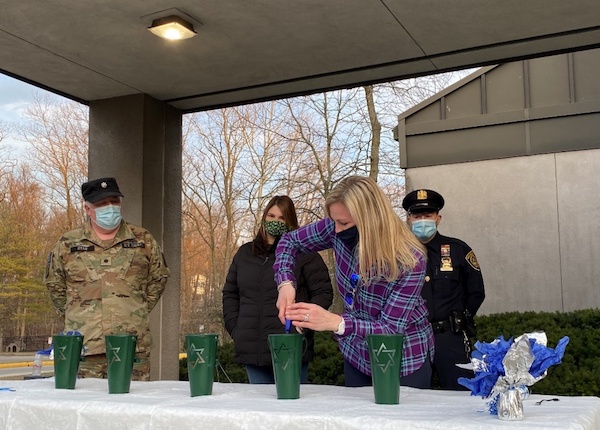 Karen Kolodny, CEO of JCCMW, led the remarks reflecting on the challenges the community faced over the last year and remembering JCCMW’s treasured employee, Cathy Klein.

“We want to acknowledge the difficult year we have had and recall with fondness those we have lost to COVID-19. We also acknowledge that every day we have is a blessing,” said Kolodny. “Unfortunately, the JCC lost a valued employee this year - someone who worked here for more than 30 years, Cathy Klein. We will always cherish Cathy's memory. Her kind and gentle way with patrons and colleagues will be missed.”

When the city of New Rochelle became one of the first COVID-19 epicenters in U.S., JCCMW, like many nonprofits and businesses, did not reopen until months later. Thursday’s ceremony was a time to reflect on events of the past year, remember those lost and express gratitude for the health and safety of the community especially for our frontline health workers. JCCMW is the largest community center serving New Rochelle where the virus was first detected in New York State.

In attendance, were first responders who were on the frontlines during the first year of the pandemic and elected officials including, Westchester County Executive George Latimer, New York State Assembly Member Amy Paulin and New Rochelle Mayor Noam Bramson. Teachers, local clergy, and members of the National Guard were also in observance. 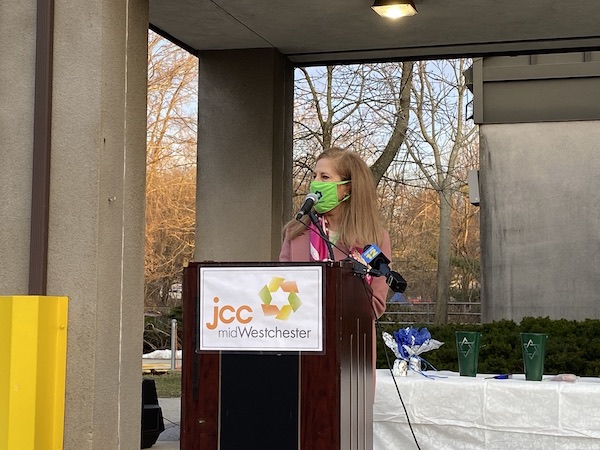 Karen Kolodny, CEO of JCCMW, addresses the attendees, reflecting on the challenges the community faced over the last year and the loss of JCCMW’s treasured employee, Cathy Klein.