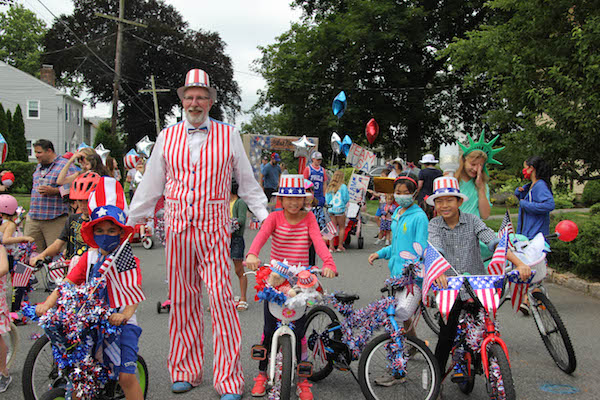 The Arthur Manor Neighborhood Association will hold its 94th Annual July 4th parade and ceremony on Monday, July 4th. The lineup for the parade will begin at 9:15 am at the corner of Bell and Sprague Roads and the parade will start promptly at 9:45 am. The parade will then march down Sprague Road, turn left at Lyons Road, and then proceed to Davis Park. Children interested in participating in the parade can dress in patriotic costume or decorate their bicycles, tricycles, wagons or strollers. Pets are also encouraged to dress in patriotic costumes. The celebration continues at Davis Park with a ceremony, comments from Village officials, and awards for parade participants in all of the traditional parade categories. Following the ceremony, the Association will hold the annual field games – including the egg toss at the end! Hot dogs, bottled water and other food and refreshments will be available for purchase. The Association encourages everyone to come out this year and celebrate the 4th of July by showing your patriotic colors! Please contact Matt Martin at matthew.martin@pattoneakins.com or (917) 697-2747 if you would like to help out with this year’s festivities.

To attain the Arrow of Light rank, Kirkendall-Rodríguez and Yang had to complete requirements in these four areas:

Outdoor Adventurer, which is all about outdoor adventures, like camping and learning outdoor skills safely and with fun.

Duty to God in Action, which in Pack 440 is an at-home activity because faith beliefs in Scouting are determined by the family and everyone's duty is different.

Scouting Adventure, which covers basic Scouting knowledge, plus an opportunity to visit with and participate in an outdoor activity with a local BSA Troop.

Any rising sixth – eleventh graders interested in joining Scarsdale’s Troop 4 may contact Ted Mazza at scoutmaster@scarsdale4.mytroop.us. Troop 4 will have a girl’s Troop, and girls will participate in a number of the events and activities with the boys in the Troop. 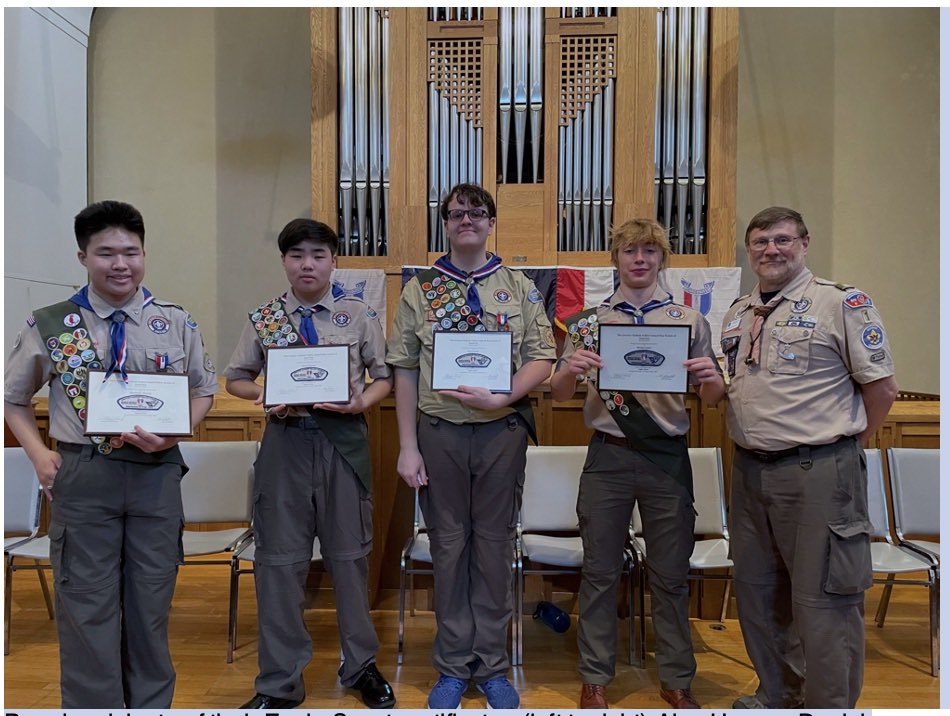 In the presence of the scouts’ family and friends, Mark Schivley, Algonquin District Chairman of the BSA Greater Hudson Valley Council, formally welcomed the scouts to the ranks of Eagle Scout. County Executive George Latimer and New York Assemblymember Amy Paulin congratulated the scouts and their families and presented the young men with commendations. In addition formal citations were given from the Mayor of Scarsdale, Jane Veron. Reverend Katherine Pater of Hitchcock delivered the invocation and benediction.

The Eagle Scout project, a community service effort led, organized and executed by the Eagle candidate, is one of the most challenging requirements. The boys had received help from family friends and scouts to have their projects come to fruition. Daniel Hwang’s project centered around the repair and completion of a terraced garden at Hitchcock. There had been an unfinished, abandoned terraced garden in the rear of the church’s property which, with the expansion of the Bronx River Trailway, had gone from a dark corner with little pedestrian traffic to part of a busy walking and jogging route for the community. Daniel’s project resulted in a garden of flowers and plants for the church community and users of the Bronx River Trailway to enjoy.

While in the troop Daniel has served as Den Chief and Chaplain Aide, as well as being recently elected to the position of Assistant Senior Patrol Leader. Outside of scouting, Daniel’s passion is baseball. He competes year-round as an outfielder for HEAT baseball in Ardsley. Daniel also enjoys singing and was a NYSMAA All-County voice selection in 2020. Daniel regularly volunteers with Midnight Run and Westhab, which provide food, clothing, and other essential items to the homeless in New York City and Yonkers. A high adventure lover, Daniel canoed more than 114 kilometers in northern Ontario a few years ago and is looking forward to biking and camping along the Pacific Coast this coming summer. Daniel’s other hobbies include golf, squash, and skiing.

Keeping it all in the family, Daniel’s older brother Alex also was formally recognized as an Eagle Scout on the 15th. Alex, a junior at Scarsdale High School, similarly began his scouting journey with Pack 440. As a member of Troop 4 Scarsdale, Alex has served as Troop Historian and Assistant Senior Patrol Leader. Alex has a strong interest in scientific research and has co-authored an academic journal article on asymptomatic pediatric Covid-19 patients in the metro-NYC area. He is also studying genes and biological pathways for various neurological disorders as a research assistant in the Icahn School of Medicine at Mt. Sinai. Additionally, Alex is active in Model UN and volunteers with Midnight Run.

For his Eagle project Alexander built three outdoor benches for Hitchcock. Permanent outdoor seating was in short supply and was in particular need by the older congregants when attending outdoor events or awaiting transportation.

A Manhattan transplant, Wesley Coker also started scouting at a very tender age. When he moved to Westchester and joined Troop 4, he enjoyed the campouts, community service events and earning merit badges. Now at 15, Wesley plays varsity football and junior varsity basketball at Edgemont High School. He is also a budding entrepreneur with a flourishing sneaker reselling business.

Wesley’s eagle project was the rebuilding of a 40-yard segment of a severely eroded and unsafe trail in the woods at Edgemont High School that is used by students daily to get to and from school. The work included clearing an adjacent stream of debris and moving stones to assist with rerouting the water flow, re-grading the trail with dirt and gravel to build a turnpike and eliminate puddling, forming short barrier walls of stone, and removing existing degraded wood stairs and replacing them with rock steps. The project cost just under a thousand dollars and took approximately 110 man-hours of physical labor with the assistance of scouts, friends, and family.

Daniel Kolb, a senior at Scarsdale High School, also has been in scouting for most of his life. Daniel has held several positions in the troop, including Den Chief, Assistant Patrol Leader, Patrol Leader, Senior Patrol Leader and Junior Assistant Scoutmaster.
Daniel participated in a BSA High Adventure camp with other Troop 4 members at SeaBase in Florida, where they learned about sailing and snorkeling. For his senior option, Daniel is taking an intensive training course to become a certified Emergency Medical Technician. Daniel is headed to Colby College in the fall where he plans to study biology, with an emphasis on genetics, and also history. His hobbies include scuba, skiing, travel, gaming and reading.

For his Eagle project, Daniel designed and built an 8’ x 8’ outdoor enclosure for the enrichment of the animals of the Scarsdale Weinberg Nature Center. Animals of the nature center are put in the enclosure during the day and put back indoors in cages at night. The project has been well received by humans and animals alike.

Three of the four Eagle Scouts began their scouting journey with Scarsdale Cub Scout Pack 440. Both Pack 440 and Troop 4 have Hitchcock as their chartering organization, and they are open to people of any faith. More information is available at scarsdalepack440.com and https://scarsdale4.mytroop.us/home. 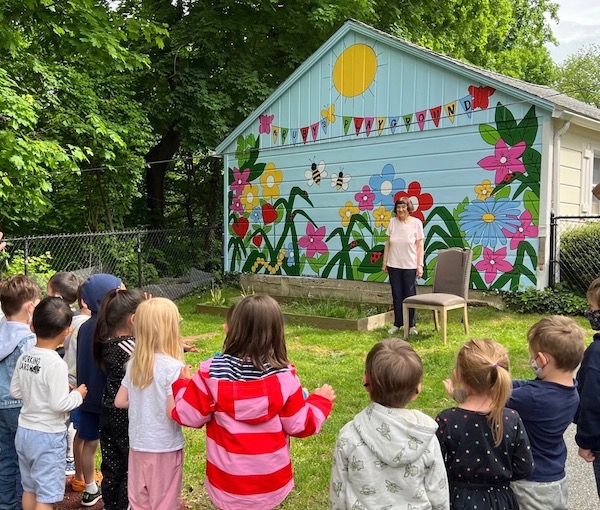 On May 24th, Ruby Woosnam was honored by Scarsdale Congregational Church Nursery School's students and staff at the dedication of “Miss Ruby’s Playground” mural overlooking the school. The mural recognizes Woosnam's career as a SCC Nursery School Teacher and Director that lasted over four decades and enhanced the lives of generations of children. At the ceremony, the beloved Miss Ruby spoke to today’s students who then serenaded her with a song.

Scarsdale Congregational Church is an open and affirming church at 1 Heathcote Road in Scarsdale. 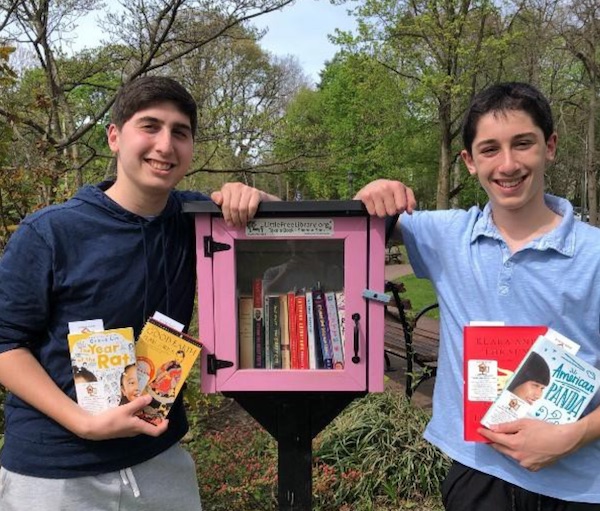 “It is a privilege to recognize Asher and Zane as one of this year’s winners of the Todd H. Bol Award for Outstanding Achievement,” said LFL Executive Director Greig Metzger. “Their volunteer efforts exemplify the vision of the late founder of Little Free Library, Todd Bol, to engage communities and enrich lives through the power of shared books. Through their effort, Asher and Zane have made their community a better place to be.”

After their local public library installed five Little Free Libraries around town, Asher and Zane Kohn started the “Diverse Books Teach Tolerance” project. The brothers use Little Free Libraries to distribute free books by diverse authors or about the experiences of diverse groups. Every month, they share a new selection of books for child, teen, and adult readers. Each diverse book has a sticker, QR code, and a bookmark that explains the Diverse Books Teach Tolerance program. Asher and Zane are Little Free Library stewards themselves and have even started an Action Book Club. Their motto? “Building a Better Community, One Book at a Time.”

“Volunteering as stewards and running the Diverse Books Teach Tolerance program make us feel a part of something that is bigger than ourselves,” said Asher and Zane. “We think that Little Free Libraries are a great way for teens to get involved in their communities and we hope our experience will inspire other teens around the country to start diverse books projects in their hometowns.”

The Todd H. Bol Awards for Outstanding Achievement are named for LFL’s founder, Todd Bol, who created the first Little Free Library book-sharing box in 2009 in Hudson, Wisconsin, and passed away unexpectedly in 2018. This is the fourth year the awards have been presented.

Read more about this year’s winners and see their photos at LittleFreeLibrary.org/todd-bol-awards.